Two Sunday Smithsonian Art Gallery Visits: Paintings That Caught My Attention and the Great Marlene Dietrich - Dressed For the Image 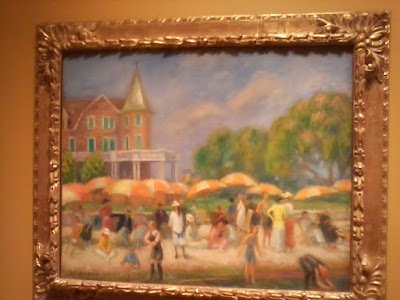 "Beach Umbrellas at Blue Point" by William Glackens, Smithsonian American Art Museum (SAAM),
Washington D.C., 4:24PM October 29, 2017.
I really like this painting. It reminds me of 1890s sorts of seashore paintings -- although this Glackens one is from circa 1915.
A better image: 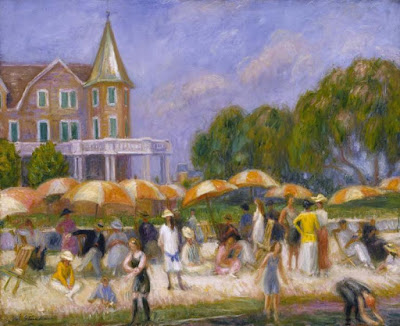 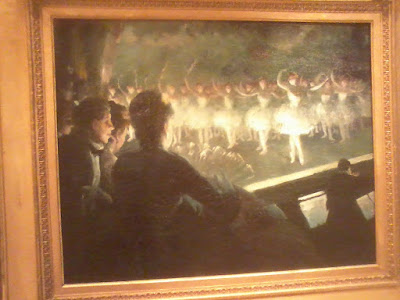 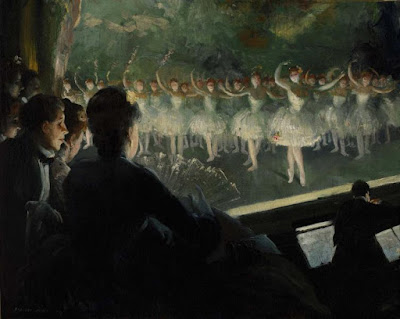 
By way of explanation, I first went to the SAAM / National Portrait Gallery with the intention of seeing the photo exhibit Marlene Dietrich: Dressed for the Image that runs through mid-April 2018. I had stopped at the nearby restaurant The Smith for a quick drink on my Sunday free day, and there was a copy of the exhibit booklet on the next bar stool.
It read so well and the pictures were so intriguing that I opted to go see it. 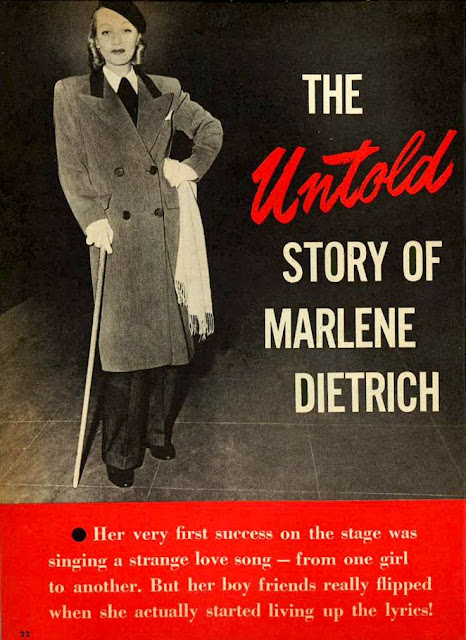 The visit was well worth it -- what an amazing person she was. In addition to the pictures of Dietrich and accompanying stories, there was a vintage copy of a July 1955 Confidential magazine with its cover story expose "The Untold Story of Marlene Dietrich" that delved into her lesbianism (see image above).
Here is a site with good images. 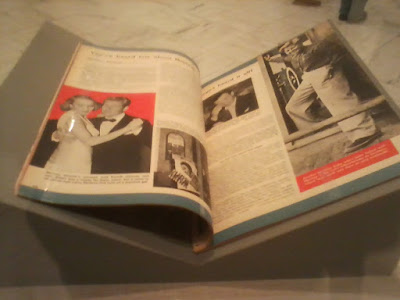 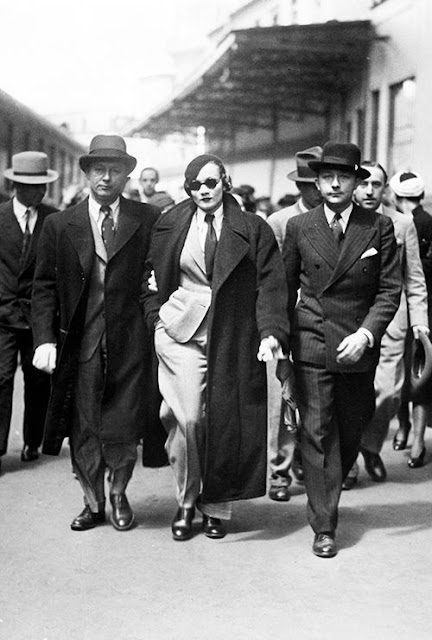 Marlene Dietrich arriving dressed in men's clothing at a Paris train station in May 1930. She is with her husband Rudolf Sieber. What a great picture.
The back story to this picture is that Dietrich was warned by the authorities that she might be arrested if she showed up in men's clothing -- and as you can see in this picture, she gave less than a shit.
*******


As for Ms. Dietrich -- born into what was basically Prussian nobility -- she proudly embraced her bisexuality and even men's clothes-wearing androgyny, even here in America in the 1930s during her Hollywood heyday.

Marlene Dietrich in the 1930 film "Morocco."
She despised the Nazis and became an American citizen -- and spent years performing for the Allied troops. As the exhibit summary states:
Dietrich's many honors include the Medal of Freedom for her service entertaining American troops for 18 months during World War II, often on the front lines. The German-born star remains a symbol of anti-Nazism, a fashion icon and an influential figure of the LGBTQ community. 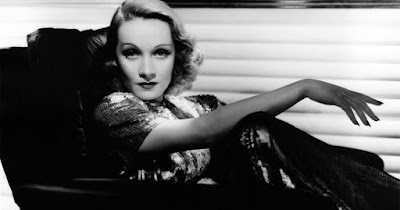 If you aren't aware of who is Marlene Dietrich, you need to learn. If it helps, she's the third person mentioned in Madonna's line up of iconic greats in the song Vogue after Garbo and Monroe but right before DiMaggio.
As for Confidential magazine, wow. To say it was "ahead of its time" is quite the understatement. Needless to say, that publication didn't last too long.
Moving onto other paintings at SAAM that caught my attention ... 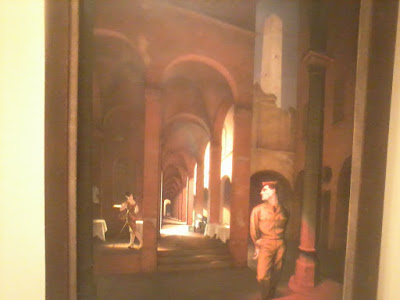 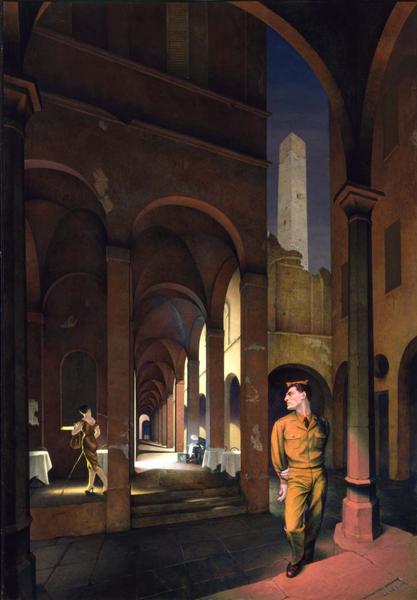 Image source here. The write-up there states the following:
Night in Bologna is a dark comedy of sexual tensions played out on a stage of shadowy arcades. In the foreground, a soldier on leave throws off a visible heat that suffuses the air around him with a red glow. He casts an appraising look at a worldly woman nearby, who gauges the interest of a man seated at a café table. The gawky tourist is unaware of her attentions, and looks longingly at the man in uniform. Cadmus left the outcome unclear because he was more interested in the tangle of human instincts than in tidy resolutions. He once said that he would always rather paint "a novel" than "a short story."
******* 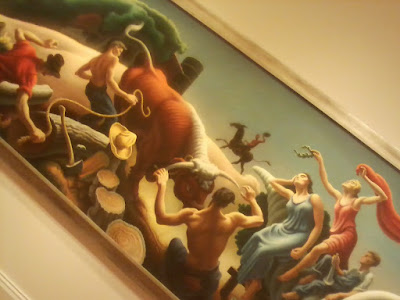 "Achelous and Hercules" by Thomas Hart Benson, SAAM, Washington, D.C., 4:23PM November 5, 2017.
This is just a portion of the large mural-like painting. Here is the full image:


Alas, I cannot post it any wider. So in lieu of that, I am posting a sideways version of it. This is a really strange painting created in 1947. The write up -- as given in the link above -- states the following:

Intense colors and writhing forms evoke the contest of muscle and will between Hercules and Achelous, the Greek god who ruled over the rivers. In flood season, Achelous took on the form of an angry bull, tearing new channels through the earth with his horns. Hercules defeated him by tearing off one horn, which became nature's cornucopia, or horn of plenty. Thomas Hart Benton saw the legend as a parable of his beloved Midwest. The Army Corps of Engineers had begun efforts to control the Missouri River, and Benton imagined a future when the waterway was tamed, and the earth swelled with robust harvests.

Benton's mythic scene also touched on the most compelling events of the late 1940s. America's agricultural treasure was airlifted to Europe through the Marshall Plan as part of Truman's strategy to rebuild Europe and contain communism. Benton may have been thinking of his fellow Missourian's legendary stubbornness when he described Hercules as "tough and strong" with "a reputation for doing what he thought was right."


I should also mention that I went to the picture exhibit The Face of Battle: Americans at War: 9/11 to Now that is at the National Portrait Gallery until January. I would like to go back to that exhibit with my mom when she's in D.C. around Christmas.
Finally, here is an Edward Hopper painting that I came across at SAAM: 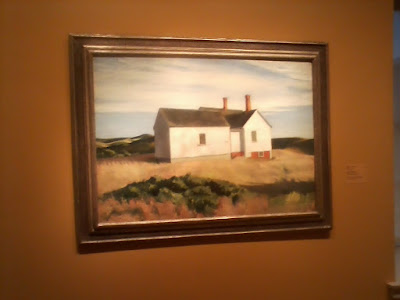 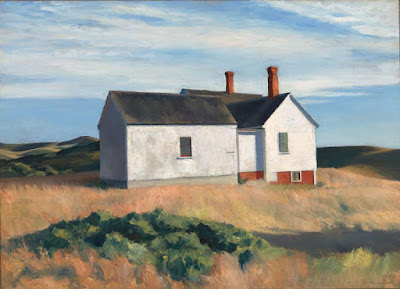 
OK, and with that I'm going to sign off for now. My next planned update will be late Wednesday or early Thursday before my upcoming Thursday - Sunday trip to Chicago.
--Regulus
Posted by Regulus at 3:07 AM