Thoughts, Prayers, Guns Galore, and More Tax Cuts for Billionaires -OR- Another Day, Another Made-in-America Mass Shooting (Oh, and Has Anyone Seen Hillary's Lesbian E-mail Server??) 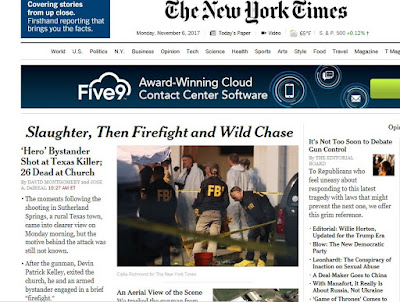 Another day, another fucking mass shooting in America ...
Does it matter the details? Do we need to know "the motive" of the gunman. Not in the slightest.

I think this comment by Ken Cerveny of Little Canada, Minnesota accompanying this Huffington Post article sums it up best:
Oh well, price of freedom, I guess. Thoughts and prayers, etc., etc. Now, back to cutting taxes for the people who don't need a tax cut!
But at least the Texas AG -- some ignorant, Fox News-addled GOP ass-hat named Ken Paxton -- has the right answer:

When the history of this Great American Experiment is written, Texas Attorney General Ken Paxton will stand out as a shining example of some late 20th / early 21st Century hybrid Buckaroo Banzai and Lone Ranger wannabe whose sole achievement in life was to be an embarrassment even on his own terms. When the Vulgar Talking Yam finally fires Leslie Jordan, I mean, Jefferson Beauregard Sessions III as his A.G., maybe let's bring in this Paxton clown. Besides, I think Putin has already spread the Fox Fake News meme that this was an "Antifa" attack against the good peoples of Texas. That should keep the Paxton - Sessions Army of the Lord's Righteous busy chasing their tails. 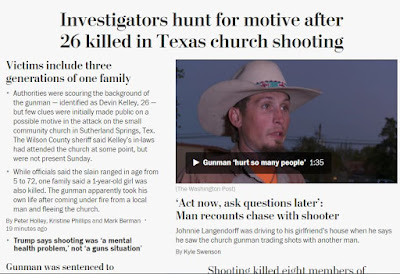 Enough of that. As Mr. Cerveny said, now back to tax cuts. Say, has anyone seen Hillary's lesbian email server? It was last seen in BENGHAZI!!!
--Regulus