Saturday Evening Post for October 14th, 2017: Blog Entry on the Edge of Nowhere 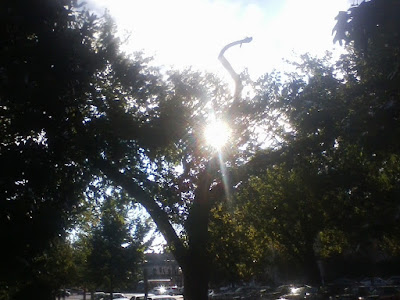 
I'm home in my lamp lit, window air-conditioned, little efficiency apartment watching the MeTV Super Sci-Fi Saturday Night lineup -- which segues into the Sunday Sci-Fi Red Eye lineup. I just made some dinner and finished four loads of laundry.
The episode of Star Trek: The Original Series episode is my favorite one: The City on the Edge of Forever. These are the digitally reworked ("remastered") versions. 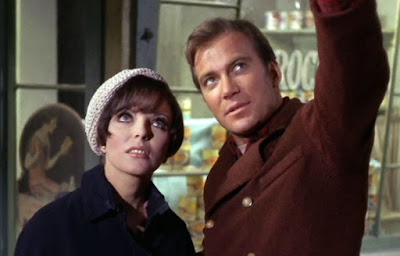 The Svengoolie-hosted movie this week was a light-hearted one: "The Ghost and Mr. Chicken" starring the late comedic actor Don Knotts of "Barney Fife" character fame. Battlestar Galactica (the 1978 series) is on next. I love the opening theme to it. 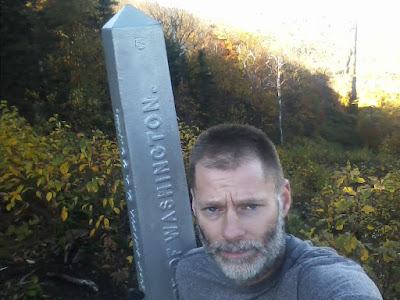 My friend Chester on the US-Canadian border in Vermont at the end of a 20-day, 300-mile hike starting from Dalton, Mass., with a final night (after reaching the border) in the nearby City of St. Albans.
Awesome achievement, Chester. You should be proud. (By contrast, I sat in an office cubicle and gone to a few bars and restaurants during that time.)
*******


I'm totally not going out tonight. Last night was the usual disaster show, and I'm quite worn out. To be clear, I made it to the gym today, but I got there at nearly 5PM. Instead of a multi-part workout, I just did a treadmill jog followed by a swim. I managed to get up to six miles in two parts while watching on the treadmill's TV monitor two-and-a-half episode of The Golden Girls on TV Land. 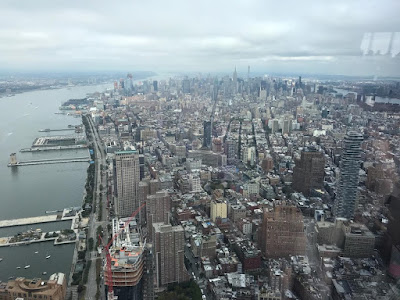 The view of Manhattan and the Hudson River from atop One World Trade Center, October 13, 2017.
This picture was taken by a person I know named Tim. He is someone with whom I was close friends -- in a manner of speaking -- about 20 years ago, but with whom I only recently (in the last three months) became reacquainted. It's all somewhat problematic.
*******


For tomorrow, I am planning on going back to the gym to do the weightlifting. For tonight, as I said, I'm just in and doing nothing but watching TV and updating this blog. I've composed a Jukebox Saturday Night entry that I will post in a few minutes.
--Regulus
Posted by Regulus at 11:58 PM