First up, one of the greats by one of the greats ...
"Mercy Mercy Me (The Ecology)" by Marvin Gaye from his album What's Going On (1971)
During this Trump/GOP rightwing lunatic junta (and let's face it, that's what it is) with the War on the Biosphere (among its many wars), this song takes on extra significance.
I've said it before and I'll say it again here: We lost Marvin much too soon.
*******


Finally, and completing our visit to the 1970s, let's end with something Old School and High Disco wonderful ...
"Night Fever" by the Bee Gees from their runaway hit soundtrack album Saturday Night Fever: The Original Movie Sound Track (1977)
I love the night video's scenes of driving on a wet night along -- according to the Keeper of All Knowledge -- the old "Motel Row" stretch of Collins Avenue in Sunny Isles Beach in Miami-Dade. According to the same source, the video was made in 1978 (when the single was released) but not shown to the public until 2004. Needless few, if any, of those old motels survive. 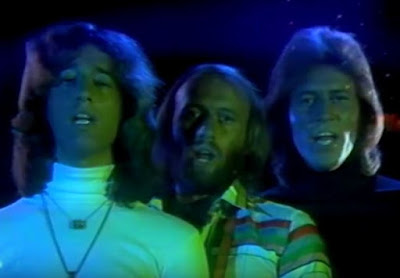 I was a bit surprised when I realized that I've never previously featured this Bee Gees hit song. To be clear, I have featured Bee Gees songs in multiple Jukebox Saturday Night editions -- here, here, and here, not to mention songs by the Bee Gees performed by other artists, such as here and here. Just not this song.
******


OK, that's all for now. In lieu of trying to hurriedly complete a Saturday Evening Post entry before midnight and then immediately posting this JBSN entry, I've decided to post the SEP entry after midnight (probably about 2AM). Yes, I know that means it will be Sunday.
--Regulus
Posted by Regulus at 10:53 PM