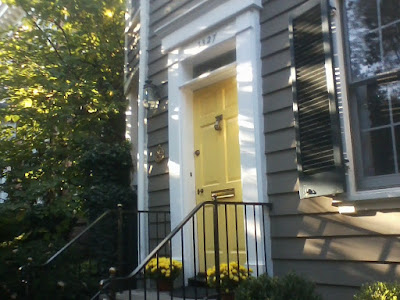 
Tuesday late morning (well, early afternoon by the time I post this).
I'm feeling markedly better compared to yesterday, although my appetite really hasn't returned.
I went to sleep around 5:30PM yesterday and -- even taking into account getting up several times, once to heat up a can of chicken noodle soup only a third of which I ate -- I slept for the better part of the next 16 hours with lots of weird dreams. I'm heading into the office right now. 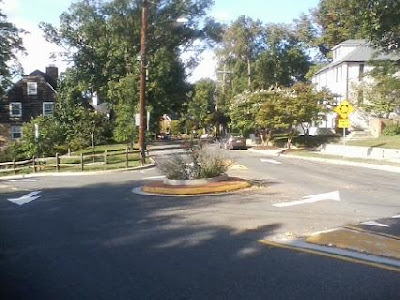 For tonight, I would like to try to go to the gym, but it is iffy, and I doubt I'll do a jog but instead a little weightlifting and swim.

There has been virtually no meaningful rain for two weeks (0.04" on Sept. 13th and, prior to that, 0.55" on Sept. 6th, both recorded at shitty National Airport).


Today, it is partly cloudy -- lots of high clouds from Hurricane Maria, now a minimal hurricane with 75mph sustained winds centered 175 miles SE of Cape Hatteras and plodding slowly northward -- but no rain is expected. Maria will race out to sea as soon as a shortwave picks it up within 24 hours.
At the 11AM hour at KDCA, the air temp now is 75F with a 68F dew point and a light northeasterly breeze.
A few Yahoo news headlines now 8 months into Trump World reality: 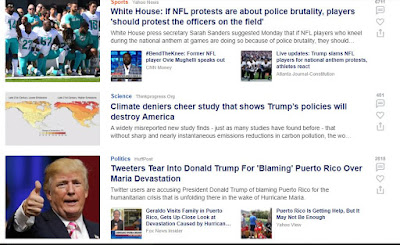 Re. the bottom headline, Trump decided to pick a big, huge, embarrassing, and ultimately self-defeating "tribal" fight this past weekend with the NFL this past weekend -- is it possible to hope both sides lose in that fight?? -- while Puerto Rico is in a post-Hurricane Maria catastrophic state. He did so for the usual Trump reason -- there was some perceived bit of victorious "dominance" to be realized.
******* 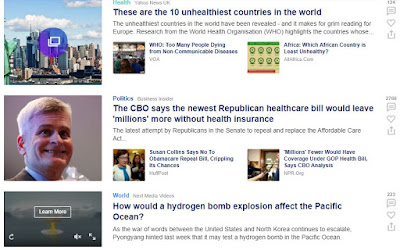 Look at Sen. Bill Cassidy (middle left image directly above). What a freakazoidal monster, not to mention a pathological liar -- imagine the kind of doctor he is. Louisiana must be very proud. As Bill Maher once said, Cassidy has the "Magic R" after his name, so he can do anything (and I do mean anything) with no consequences.
*******


OK, that's all for now. I'll try to post the entry I originally intended later tonight -- namely, the current borderline genocidal atrocity of a Senate GOP health bill (see above) that, thankfully, appears dead (again). However, zombie-like, it keeps returning from the dead because, apparently, the GOP donor class is threatening to without all its dark money from the next campaign cycle and the Trumpanzee GOP base is rabidly foaming at the mouth, like it always does.
OK, that really is all for now.
--Regulus