The Madam Returns to Set the Record Straight: What Happened Then, What's Happening Now 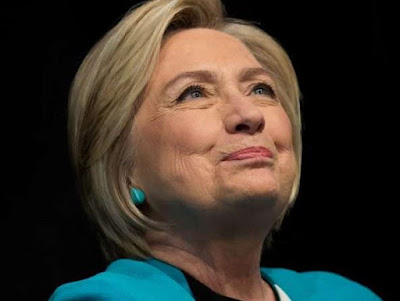 Hillary Clinton at her book signing at the Union Square Barnes & Noble bookstore in Manhattan, New York City, Sept. 12, 2017.
Here is an article about all the people who showed up -- and how long they waited -- at the Barnes and Noble bookstore in the Union Square neighborhood of New York City to see the person who will always be the rightful President of the United States even though that was a reality (in this Gnostic Cosmos) not meant to be. 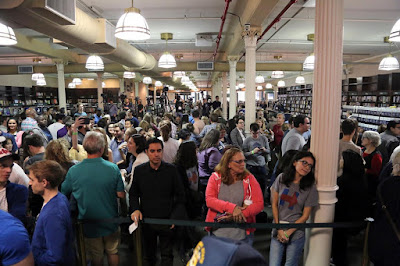 
I'm back from the gym and already made dinner. I'm watching the usual late night MeTV line-up of old shows. However, it's quite late and I'm quite tired and not even going to try to post a detailed entry on any topic. Instead, I just want to note the following ... 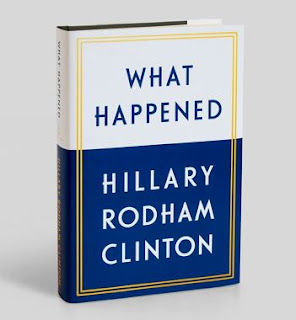 I'm very glad that Hillary Clinton has been making the media rounds this week to promote her new book What Happened about the 2016 presidential campaign and her unexpected loss -- how and why it happened. I'm delighted she is letting her views be known in no uncertain terms.


And fuck all those rightwing yahoos steeped in the virulent Petri dish of Fox News, rightwing talk radio, and internet trolldom who have such an atavistic and misogynistic hatred of her. 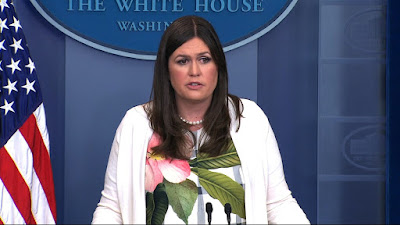 This brings up my second point in this entry: I am actually happy that the lunatics over at Camp Runamuck -- a.k.a., the Trump White House -- seem to be encouraging Trump's own Justice Department to go after James Comey for allegedly leaking "privileged government information" to the media (a charge that is likely bullshit). 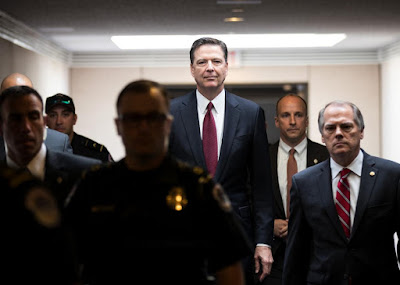 Grandstanding, showboating, ever-so-upright-and-sanctimonious former FBI Director James Comey -- all 6'11" of him -- arrives to testify on Capitol Hill this past July to give his version of events that transpired vis-à-vis him and Trump.
This charge is, in all likelihood, pure Trump bullshit fantasy. It's also true that Comey's firing was wrong on many levels, not to mention a terrible abuse of Trump's power. However, Comey is precisely why we have Trump as president -- Comey helped sway the election outcome by his "unprecedented actions" 11 days beforehand that, as the Madam correctly stated, "forever changed history" -- forever for the worse. 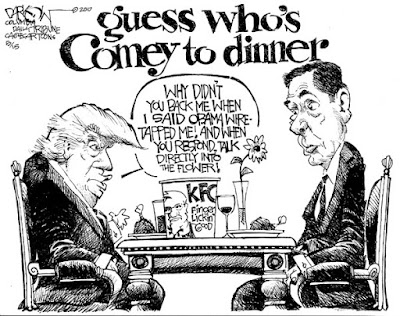 Thus, Comey getting fired by Trump and caught up in the billowing clouds of noxious smoke from the raging Trump dumpster-and-tire fire to include the astonishing Russian election meddling and Trump campaign collusion scandal, represents a case in which the right (just) thing is happened even though it is for all the wrong proximate reasons. (Talk about the "arc of the Moral Universe" and all that...) 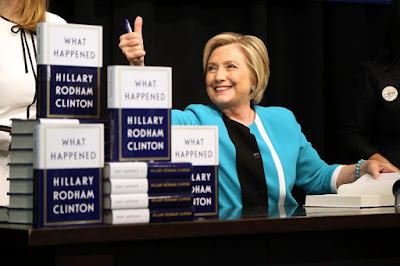 Hillary Clinton gives a thumbs up to supporters who lined up and waited for many hours to get her to autograph their copies of her new book What Happened, Barnes & Noble bookstore, Union Square, Manhattan, New York City, Sept. 12, 2017.
*******


I was going to try to post her interview earlier tonight with Anderson Cooper on CNN, but the only YouTube versions I found were divided up into too many segments. Instead, here is her interview a couple days ago with Ezra Klein of Vox.com:
About Special Counsel Robert Mueller's investigation into (as Charlie Pierce would say) the Russia "ratfcking" of the 2016 presidential election and everything else involving Trump and Russia, it is heating up again -- meaning Trump's frenetic tweets that reveal his megalomaniacally deranged mind should again resume. Here is a linked Slate article about the investigation. 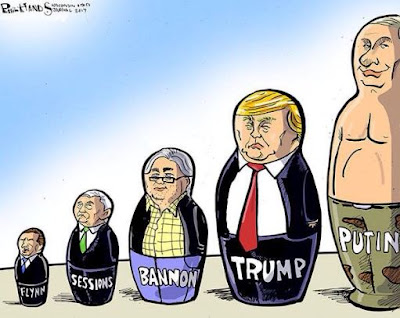 Best quote from that article:

The Russia investigation! It dropped out of the headlines for a few days there thanks in part to POTUS' sudden friendliness toward Nancy Pelosi and Chuck Schumer, but now it's back and better than ever, if by "better" you mean "uncovering yet more evidence that the American election was sabotaged by white-power trolls employed by a hostile foreign intelligence operation."
Here is a link to another piece on the topic, this one by Charlie Pierce.
OK, I think that's all for now. As I mentioned in my previous entry, I am planning on having a supplemental gym night tomorrow night after work. Thereafter, I also intend to post a new blog entru. 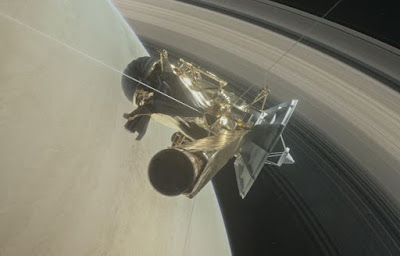 
Given that it will be the eve of the planned death plunge of the Cassini space probe into the atmosphere of Saturn, the entry will likely commemorate this awesome and intrepid little planetary space probe that left earth 20 years ago.
--Regulus
Posted by Regulus at 2:43 AM