September in the Rain: Personal Prelude and Comprehensive Update on Major Hurricane Irma (Including Model Forecasts and Radar Imagery) 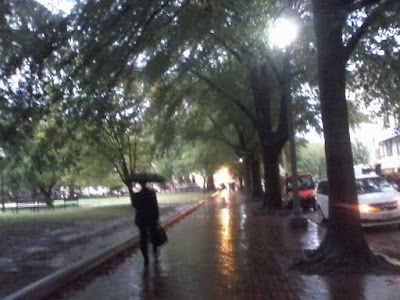 
This is a brief personal update followed by a comprehensive update on Hurricane Irma ...
Today (Wednesday), I wasn't as productive at work as I would have liked to have been, in part because I was so preoccupied with Hurricane Irma (see below for information). 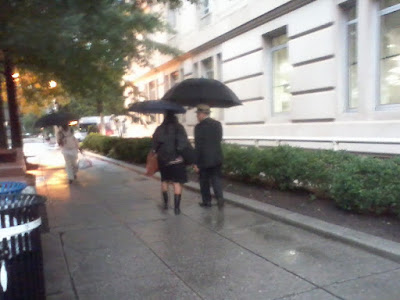 
Tonight, I went to Old Ebbitt Grill to the Old Bar to meet a long-ago person in my life (Tim). That is a long story that I don't have any desire to go into now. Suffice it to say, it was an interesting night. He actually paid the tab, and I walked home (although I managed to catch a well-timed S4 bus at P and 16th Streets NW to the remaining short distance to U and 16th Streets NW). 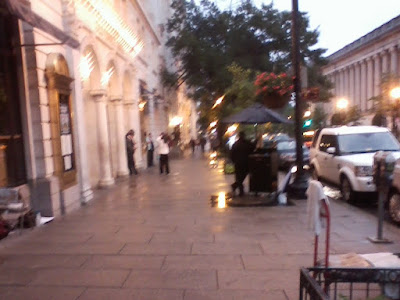 
I'm home watching my now-regular lineup of late night old TV show reruns on Me-TV to include: Carol Burnett and Friends, Perry Mason, The Twilight Zone, and Alfred Hitchcock.
The Twilight Zone is still damn scary after all these years. The one tonight was extra spooky: "Night Call."
The weather today and tonight was showery with intermittent heavier bouts of rain. Rainfall totals for Sept. 6th were as follows: 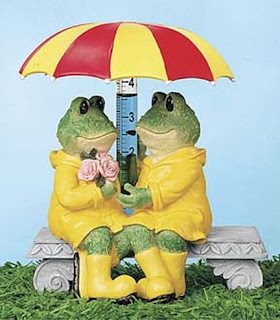 While highs for the day were in the low 70s F, those occurred shortly after midnight. Daytime highs were mostly in the 60F to 63F range.


For the next several days beginning on Thursday (later today), the weather is forecasted to be mostly sunny, cool, dry, and fall-like pleasant with highs in the low 70s F and lows in the low to mid 50s F.
Turning to the Hurricane Irma ... 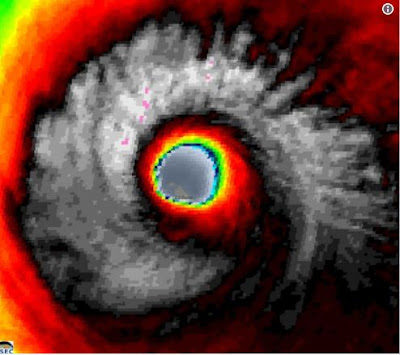 
We're approaching 36 hours that Hurricane Irma has top sustained winds of 185MPH -- even after passing over Barbuda and St. Martin and grazing Puerto Rico -- while continuing on its WNW course at about 16MPH. That sets some sort of record, even as the 185MPH sustained winds that passed over Barbuda around 130AM Sept. 6th (about 24 hours ago) made Irma tied for the second strongest tropical cyclone by wind speed to cross a populated land mass (even if just a small island). This is shown in the following table: 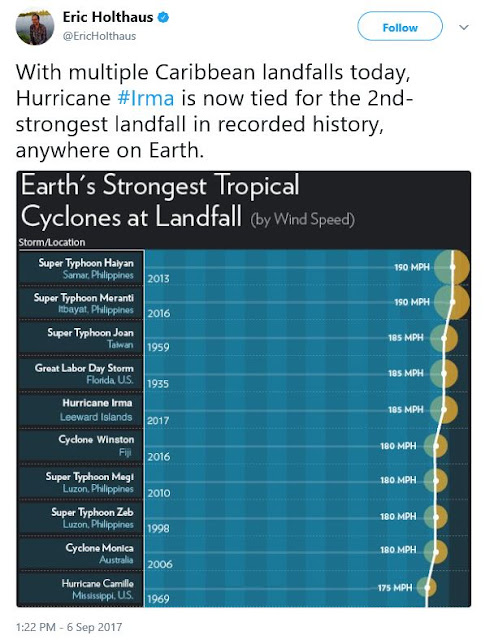 List of Earth's strongest tropical cyclones at landfall by wind speed as shown in a tweet by meteorologist Eric Holthaus, September 6, 2017.
Hurricane Irma ties for 2nd.
*******


What's remarkable is that record includes those monster typhoons of the western tropical Pacific Ocean.
There still isn't a good sense of the scale and scope of damage done -- or casualties including fatalities -- on those islands. Here is footage of Hurricane Irma striking St. Martin (the southern Dutch part is known as Sint Maarten):
This shows the astonishing fury of a category 5 hurricane with winds in the 150+MPH range. I believe this is on St. Martin. The camera -- possibly a traffic cam -- does down after about 1-minute. The second part of the brief video is silent footage somewhere else on the island.
In San Juan, the NWS daily climate summary indicated 1.08" of rain had fallen yesterday -- although I could not find the exact location where this is recorded. 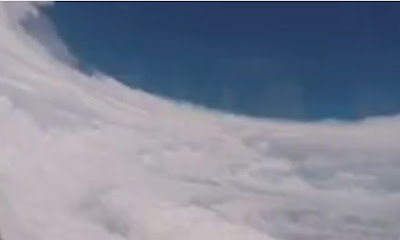 The view inside the eye of Hurricane Irma as seen on Sept. 5, 2017 by a U.S. Air Force Reserve hurricane hunter light; Photo by Major Brad Roundtree.
The inner eyewall's "stadium effect" is extremely well pronounced.
******* 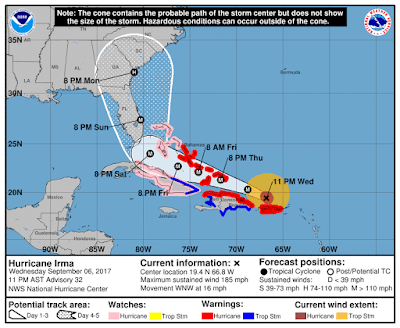 
The latest 0Z (Sept. 7, 2017) operational GFS is rolling in as I write this, and it shows the storm further intensifying to ridiculous -- and almost certainly overdone -- strength in terms of central pressure, but it also shows a slightly farther eastward point for the sharp northward curvature, narrowly sparing Miami-Dade a direct hit by a category 5 tropical cyclone.*
*Having said that, having an 898mb hurricane centered 40 to 50 miles off Miami is hardly an "all clear." 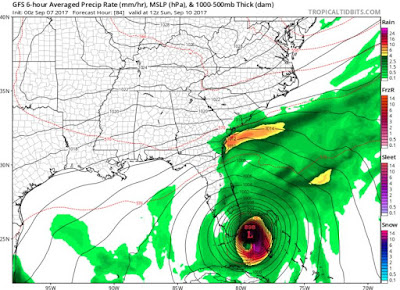 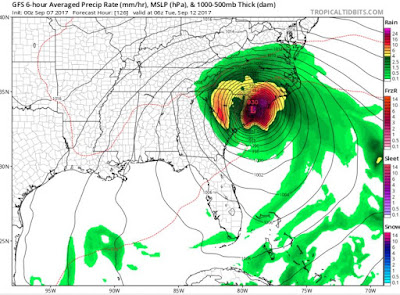 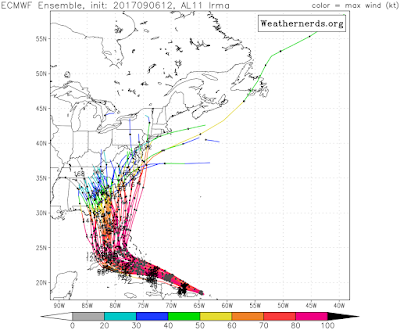 12Z Sept. 6, 2017 Euro's Integrated Forecast System (IFS) ensembles track forecast for Hurricane Irma .
This is through hour 168. The IFS has 51 members. (Note: I thought the IFS was called the Ensemble Prediction System (EPS), but I can't verify that.)
******* 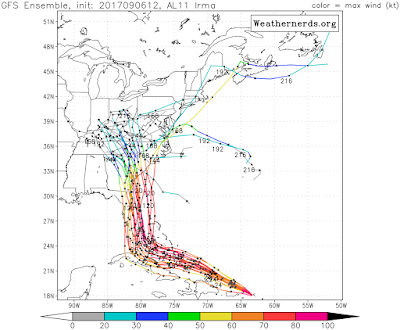 12Z Sept. 6, 2017 GFS Global Ensemble Forecast System (GEFS) ensembles track forecast of Hurricane Irma.
This is through hour 216. The GEFS has 22 members including the operational control ones.
*******


Below some radar images from the San Juan NWS radar on Sept. 6th -- in both composite and base reflectivity modes -- that are in chronological order (except for the last one) -- interspersed with the 11PM AST National Hurricane Center (NHC) discussion about Hurricane Irma:


Hurricane Irma Discussion Number 32
NWS National Hurricane Center Miami FL AL112017
1100 PM AST Wed Sep 06 2017
Earlier radar observations from the San Juan WSR-88D showed a concentric eyewall, and observations from an Air Force Hurricane Hunter aircraft showed a secondary wind maximum over the northwest quadrant. These phenomena may be associated with some weakening, but since the central pressure hasn't risen much the intensity is held at 160 kt at this time. Moreover, the concentric eyewall has become less apparent in recent radar imagery. Considerable lightning activity has been noted in the eyewall of Irma, which research has shown to sometimes be a harbinger of weakening.


Notwithstanding, low vertical wind shear and warm waters along the forecast track of Irma should allow it to remain a very powerful hurricane during the next several days. The official intensity forecast is similar to the previous one except at day 5 when stronger shear should cause more weakening. This forecast is generally above the intensity model consensus.


Irma continues on a west-northwestward heading at around 14 kt. A ridge of high pressure over the western Atlantic should maintain this course for the next 48 to 72 hours. Later in the forecast period a shortwave trough moving into the southeastern United States is likely to turn the hurricane northwestward to north-northwestward.


There has been a slight eastward shift in some of the track guidance models, but since the models could shift back to the west it is prudent to make little change to the official forecast at this time. In any event, users are reminded not to focus on the exact track since the average NHC track errors at days 4 and 5 are about 175 and 225 miles, respectively.


1. Irma is a potentially catastrophic category 5 hurricane and will bring life-threatening wind, storm surge, and rainfall hazards to Puerto Rico tonight, the northern coast of Hispaniola Thursday, and the Turks and Caicos and southeastern and central Bahamas Thursday and Friday.
2. Hurricane watches are in effect for the northwestern Bahamas and much of Cuba. Irma is likely to bring dangerous wind, storm surge, and rainfall to portions of these areas on Friday and Saturday.


3. The threat of direct hurricane impacts in Florida over the weekend and early next week has increased. Hurricane watches will likely be issued for portions of the Florida Keys and the Florida peninsula on Thursday.
FORECAST POSITIONS AND MAX WINDS


Any wholesale evacuation of Miami-Dade or anywhere else on the Florida Atlantic coastline will begin tomorrow, but the 0Z GFS -- for better or worse -- run might render problematic implementation of such a drastic plan. (This includes where my dad lives just north of Flagler Beach.)
By the way, I haven't written about the widespread wildfires creating dense clouds and overcast of smoke across the western United States the past few weeks. It has been a horrible summer in the western U.S. for heat, drought, and wildfires. 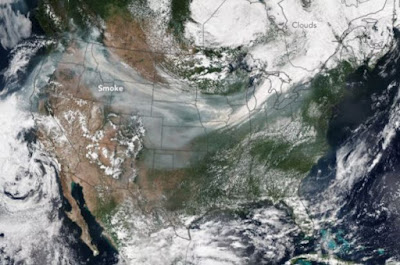 
OK, I'm going to sign off for now. Tomorrow night is a gym night, and I intend post a new blog entry thereafter, likely with more updates on Hurricane Irma.
--Regulus
Posted by Regulus at 2:24 AM