On Manatees, Maria, and GOP Malevolence -OR- Another Week, Another Category 5 Hurricane 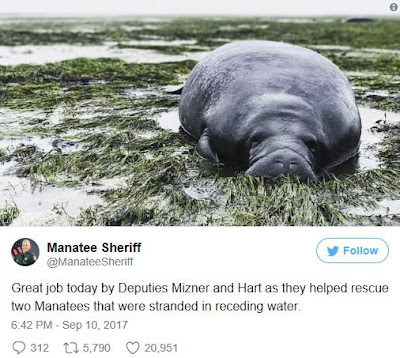 One of two stranded manatee in Sarasota Bay during Hurricane Irma rescued by two Manatee County police officers; county sheriff's office tweet, Sept. 10, 2017.
The powerful offshore winds on the front end of Hurricane Irma blew a large portion of the waters out of Sarasota and Tampa Bays -- creating ultra-low water conditions that caused the stranding of a number of manatees. This wasn't the only such rescue. 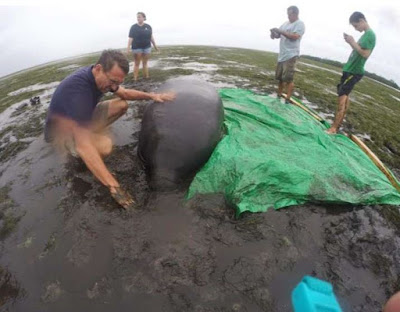 Another make-shift manatee rescue in Sarasota Bay due to the extremely low water created in a huge tidal blowout during Hurricane Irma, Sept. 10, 2017.
Apparently, these people somehow got the manatee onto that green tarp (using impromptu wooden "rails") and dragged the poor creature to water deep enough for it to swim away. (At least that was the story reported.) 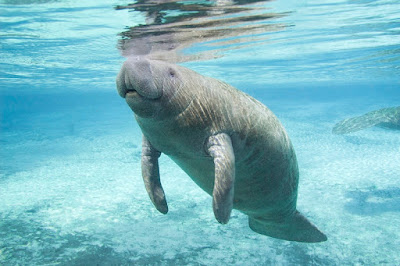 Fully grown manatees weigh, like, a thousand pounds, so you can't exactly roll one over stranded on land -- and even if you could, you would probably badly harm it. To that point, manatees are an endangered species, and by federal law you're not supposed to move or otherwise molest them; however, in a case like this, what's the protocol?
******* 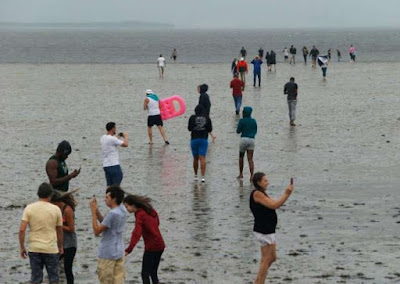 Large numbers of Tampa residents explore the briefly nearly-empty Tampa Bay due to powerful offshore winds that blew out most of the water during Hurricane Irma, September 10, 2017.
*******


To be clear, the reason for this extreme low water was different than what caused the temporary disappearance of the ocean waters around some of the Bahama islands when Hurricane Irma passed to the south of them. That was that was due basically to the extreme low pressure in the center of the storm that effectively sucked up all the ocean water. It returned the following day (gradually -- not tsunami-like). 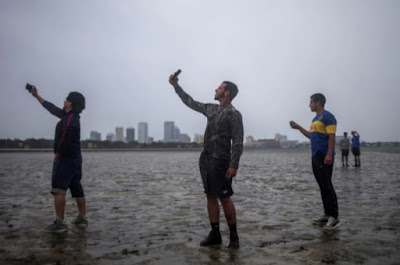 A trio of selfies by three young men in briefly empty Tampa Bay with the Tampa skyline in the distance during Hurricane Irma, September 10, 2017.
*******


So let's start the main part of this entry ...
It's late at night and I'm back from the gym following a Monday back-to-work day. I'm watching the usual late-night MeTV line up to include Carol Burnett & Friends, Perry Mason, The Twilight Zone, and Alfred Hitchcock Presents 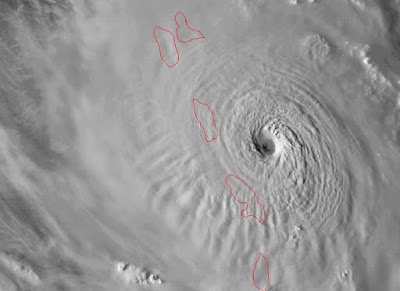 
Let's get right to it: There is another major hurricane in the Caribbean -- this one, Hurricane Maria, which rapidly intensified to category 5 strength with top sustained winds of 160mph and plowed into Dominica a short while ago. (Just as an aside, I've been to Dominica (once) and neighboring Guadeloupe (twice) back in the 1990s.)
Per the CWG, Hurricane Maria is expected to strike Puerto Rico as a category 4 or even a category 5 tropical cyclone (the last category 4 to hit there was in 1932 and the last / only category 5 in the historical record was in 1928). Thereafter, it is forecasted to transit the Turks and Caicos. 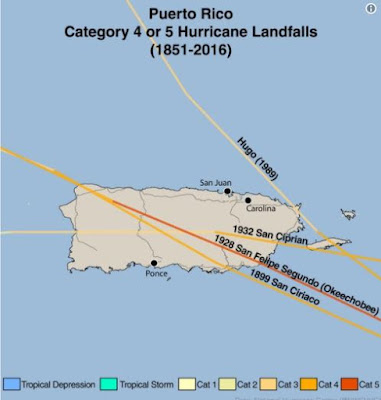 Map of the paths of all category 4 and 5 hurricanes to strike Puerto Rico, 1851 - 2016.
The 1928 hurricane (called the San Felipe Segundo Hurricane) went on to strike South Florida -- where it is known as the Okeechobee Hurricane -- that resulted in 2,500 people drowning when Lake Okeechobee overflowed its banks, an event that lead to the construction of the Herbert Hoover Dike, itself an ecologically terrible idea. This really gets more into the perfidies of what is known colloquially as Big Sugar -- but we'll avoid that topic right now. 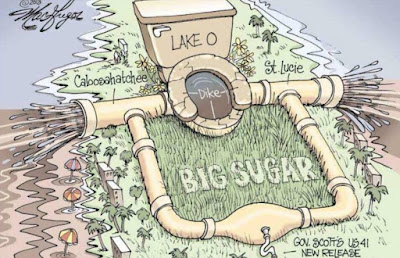 
The areas obliterated by Hurricane Irma including Barbuda, St. Martin, and parts of the Virgin Islands should be, thankfully, spared, although at this point, Maria would have just rearranged the debris.
Some forecast models suggest Maria could do a bit of a Fujiwhara dance around Hurricane Jose -- a category 1 hurricane presently centered 235 miles east of Cape Hatteras and moving north -- even as Jose becomes post-tropical / extratropical, resembling more of a nor'easter in terms of structure and wind field. This Fujiwhara dance could even make Jose execute a second loop out over the Atlantic. 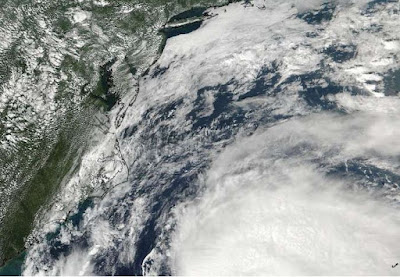 
However, both systems are forecasted to spare the U.S. East Coast -- in particular, the mid-Atlantic region -- as they curve to the east, although Jose could graze eastern New England and there are tropical storm watches up for that area.
The biggest impact from Jose is high surf and rip currents along the East Coast. 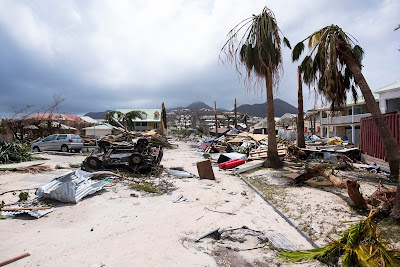 A scene of widespread destruction in Orient Bay on the island of St. Martin in the aftermath of Hurricane Irma earlier this month.
It has been reported that Barbuda has been completely evacuated for the time being -- with all the local population (roughly 1,650 people) now on Antigua in the wake of Irma. (Antigua and Barbuda is a sovereign country.)
******* 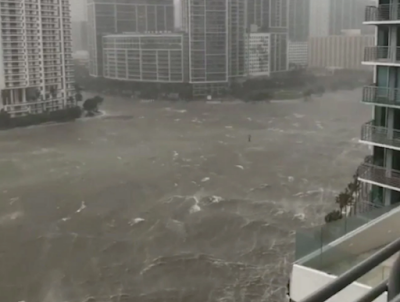 Flooded streets in Miami, Fla., during Hurricane Irma, September 10, 2017.
Irma created moderate flooding in Miami and record flooding in Jacksonville (not to mention parts of Charleston, S.C.) and devastated parts of the Florida Keys (especially between MM 20 and 30 where the eyewall crossed over Cudjoe Key at 9:10AM Sept. 10, 2017 with 130mph sustained winds). Owing to a bit of luck in terms of the city's placement with respect to the right front eyewall, Key West narrowly avoided complete devastation. 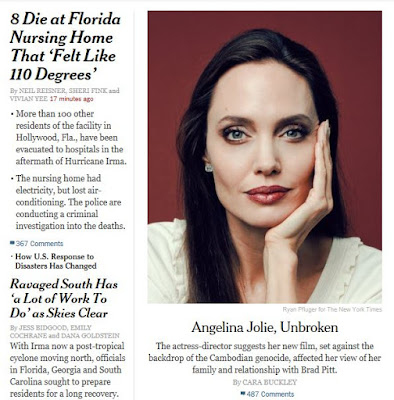 New York Times online headline from Sept. 13, 2017 about the Florida nursing home deaths.
Certainly the worst tragedy in the hurricane were the needless deaths of 8 senior citizens at a nursing home in Hollywood, Fla., as a result of excessive heat due to HVAC systems not having full power. The oldest fatality was 99 years old. Imagine living that long and dying like that. And in Florida --where you likely went to escape the cold. Directly above is the New York Times online headline about it (with free, unrelated Angelina Jolie picture).
******* 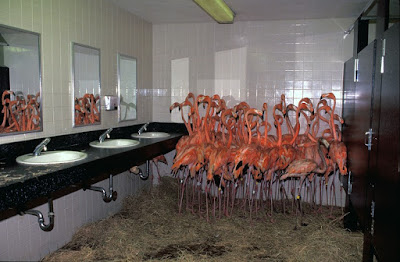 No, this isn't a collection of trailer park lawn ornaments. Rather, it's the flamingos at the Miami-Dade Zoological Park and Gardens. They were moved temporarily into a men's room during Hurricane Irma for their protection.
Confused and scared, the flamingos huddled together. Either that or they were catching a smoke.
*******


Now let me be clear: I am not hoping for a catastrophic hurricane here or anywhere -- far from it as they are too destructive and disruptive. What's more, I'm getting tired of writing about hurricanes (and, yes, I realize I never posted my Hurricane Irma synopsis). Rather, I was hoping here for just a garden variety nor'easter followed by cool fall weather. 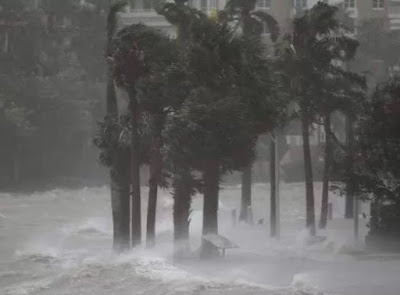 
Bottom line is that we're back into our familiar extended "weatherless in Washington, D.C." pattern with just the usual partly cloudy, warm, humid, and nothing else weather with highs around 82F, lows around 62F. Any legitimate "autumnal" weather is probably six weeks away. 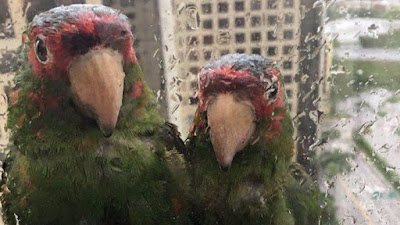 Two parrots seek shelter on a ledge of the Miami Marriott Dadeland Hotel, in Kendall, Fla., Hurricane Irma arrives, September 9, 2017.
Poor things. Instead of taking their picture, the person should have just let them in. (Yes, I know hotel windows don't usually open.)
*******


The political stuff is heating up again in terms of the Trump campaign collusion with Russia scandal -- which increasingly has the chance of actually toppling Trump, but that would just give us President Pence with a more competent brand of GOP insanity (fundamentalism meets oligarchy). 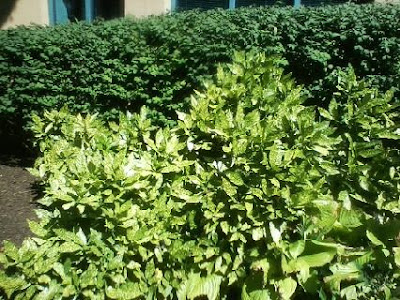 
Also, the GOP is making its final attempt to destroy Obamacare (for the current fiscal year, anyway). The latest and once-again-morally-obscene Senate iteration embodies the GOP Holy Grail of block granting Medicaid while shoving more money to multimillionaires and billionaires and corporate oligarchs.
The demented twist in this proposal, though, is how it gives most of the Red States more Blue State Medicaid money as a way -- presumably -- of punishing the Blue States that accepted the Medicaid expansion under Obamacare. 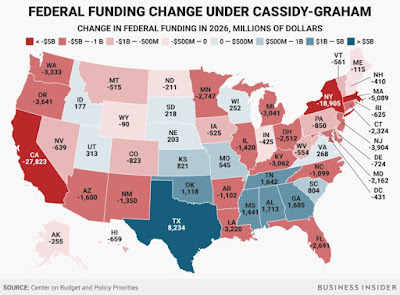 Cassidy-Graham health bill changes in federal funding for Medicaid by state by 2026.
The info is from a Center on Budget and Policy Priorities analysis (see link above) with the state map above created by Business Insider. Even if it passes, this outcome by 2026 has mathematically a near-zero percent chance of happening.
*******


If you're interested in Washington Post masturbatory / nihilistic "process story" coverage, here it is. (I'll spare you the even worse POLITICO account or any "who's up and who's down" garbage by Chris Cillizza.) 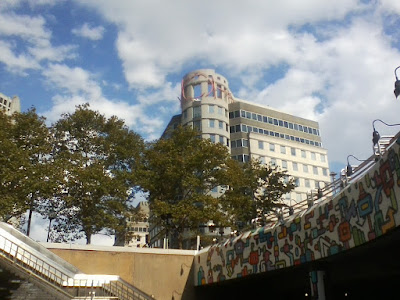 
The bill may or may not pass -- but regardless, I'm of the view that destroying Obamacare now quite possibly speeds up the faster arrival of a single payer system within the next decade, or at least a vastly expanded Medicare-for-all type of plan rather than trying to reconstruct the three-legged "stool" of Obamacare -- subsidies, mandates, and no preexisting condition limitations -- whose whole original reason for being was to safeguard America's for-profit health insurance system. (Of course, this requires the current Republican lunatics to not longer be in power.) 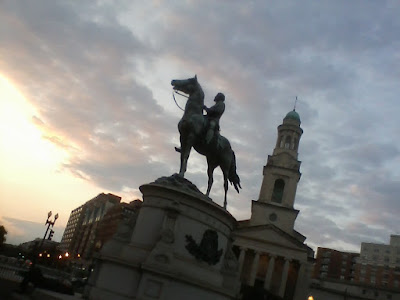 
Well, at least that's how I see it right now. I could be wrong. In terms of incremental versus radical reform to single payer, here is Hillary Clinton's take on the matter.
OK, I think that's all for now. It is after 4AM as I wrap up this entry. My next planned entry will be late Wednesday or early Thursday.
--Regulus
Posted by Regulus at 4:11 AM