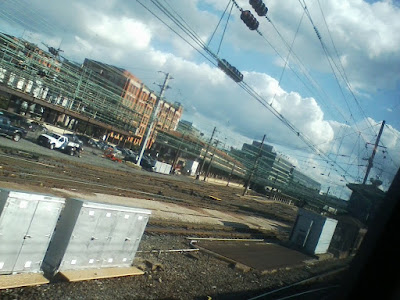 
This is just a short entry this Monday Labor -- Labour -- Day afternoon. (OK, not so short.)
As an update, I visited my mom this weekend, and we had a very nice time. On Saturday, we went to Mike's Crab House north in Pasadana on the Rock Creek, one of the numerous waterways of the Chesapeake Bay (at the confluence of the Patapsco with the bay). It was a very rainy day, and it was nice sitting by the large glass windows watching the rain fall on the outdoor deck area. 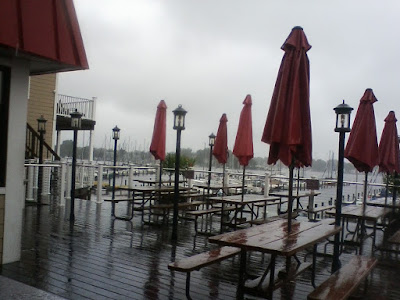 
On Sunday, we went to Adam's Grille in Severna Park and had a nice lunch in the chilly air-conditioned bar area and then headed to Odenton, where I caught the train to Union Station. Of note, there were a lot of people away this Labor Day weekend so the restaurants and roads were not crowded. 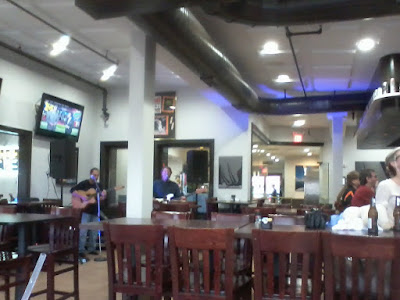 
Last night, I went to No. 9 and Trade and also had dinner with my neighbor-friend Fred at Stoney's, where Howie was bartending. I got home around 1130PM, so not too late. I had wanted to get up a lot earlier today and be out and about taking a walk, but (as usual) I just couldn't get up. 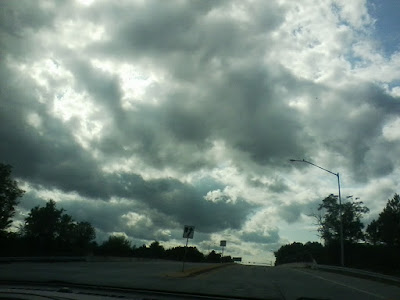 
There is something about the period between 6AM and noon that just makes me want to sleep, especially with all the REM dreaming. It is as though I live this entire other life or set of lives in alternate realities (whether Earth or some other Earth-like world, or a hybrid). It frequently involves flying, as well, which I like. 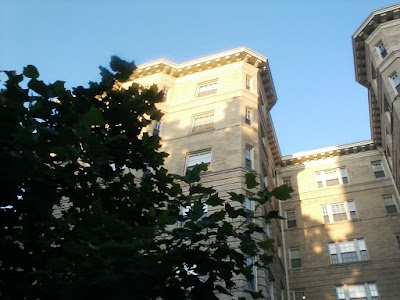 
Well, that aside, I'm up and about now and about to head out for the afternoon. I intend to post an entry tonight about Hurricane Irma, now a major hurricane approaching the Leeward Islands and about 6 days out from a possible Florida landfall. 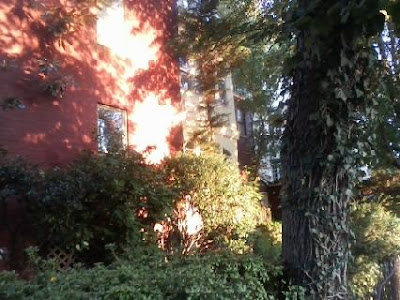 
I will be talking a lot more about Irma in the upcoming week, but I would like to note some information as of right now including the possible track. The forecasted track has shifted significantly to the south and west from a few days ago -- and the storm is now a heightened threat to Florida. 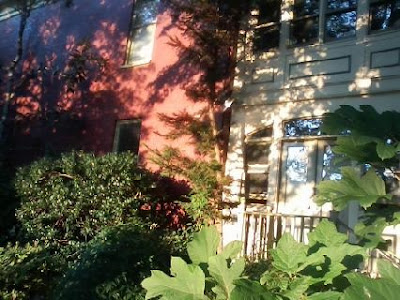 Another view of setting sunlight shining onto the exterior wall and into the small, overgrown yard of a row house at the corner of 15th and S Streets NW, Washington, D.C., 7:08PM September 3, 2017.
*******


In terms of track, Chester told me about this site called "Weathernerds" that features images from the GFS and ECMWF ("European") models and their ensemble systems (GEFS and EPS, respectively) for both Atlantic and eastern Pacific basin tropical cyclones. 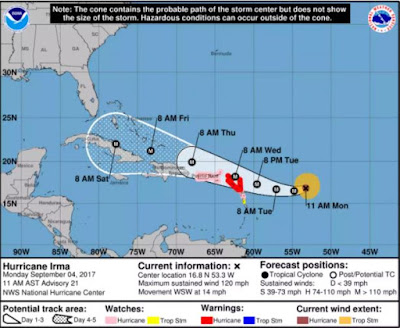 
Specifically, there are images of the tracks of the various ensemble members from both systems. The site also features output from numerous models. (I'm not quite sure how Weathernerds does this since the European Centre makes it almost impossible for the public to access that model except in the coarsest spatial and temporal resolution possible. Government agencies and research institutions must pay to access the high resolution output.)
Here are the 12Z GEFS and 0Z EPS tracks for Hurricane Irma ("AL 11"): 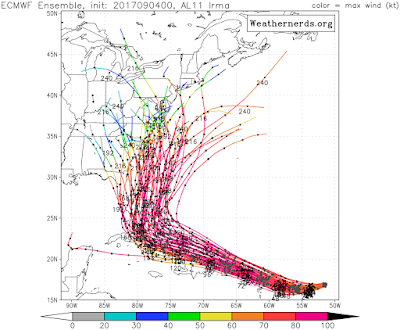 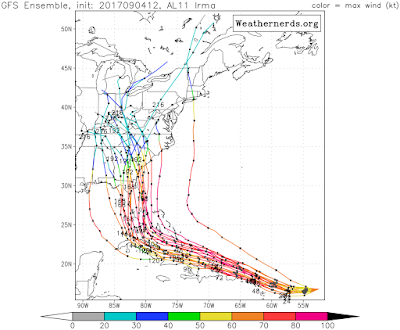 
In terms of strength, the GFS seems to be wildly overdoing the intensity -- showing a tropical cyclone with a freakishly deep intensity in the mid-to-upper 880s-mb range at one point. For reference, Hurricane Andrew's lowest pressure was 922mb and the strongest Atlantic basin tropical cyclone ever, Wilma, was 882mb. The GFS seems to be having a problem of badly over-intensifying hurricanes this season. 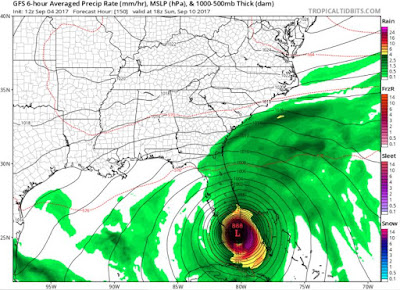 
However, given the track right up and through the Florida peninsula (see image directly above), this isn't something to be just dismissed. (I've already been texting my dad. Recall that last year, he refused to evacuate his seaside trailer park just north of Flagler Beach during Hurricane Matthew. He was fine but that was more luck that Matthew's eyewall stayed just offshore.)
I'll write more about this in the coming days. In the meantime, I recommend reading this CWG entry by Greg Porter (link embedded): It's becoming more likely Hurricane Irma will at least affect U.S., if not make landfall.
OK, that's all for now. I will try to post another entry tonight, but if I do not, then it will be tomorrow night after work and gym. (The pool is back open -- yay!)