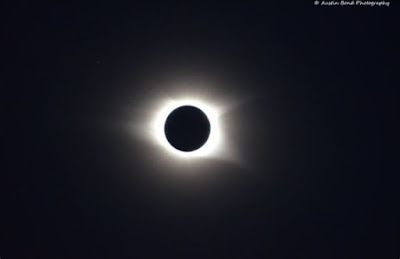 The total solar eclipse as seen from Greeleyville, S.C., in a photo by twitter user Austin Bond Photo and reposted in this CWG entry.
This photo was taken about 20 miles east from where I viewed the eclipse.
*******
Back from my South Carolina eclipse trip.
But only VERY briefly (see below).
The total solar eclipse, like the first one I saw back in Feb. 1998 on Guadeloupe, was astonishing. However, everything else about the trip was highly stressful including what amounted to 28 hours of travel time (including frequent stops and massive traffic snarls) in a 60-hour period, to include 16 hours from D.C. to Charleston and 12 hours from Charleston back to D.C., stopping to view the eclipse in what turned out to be perfect viewing conditions about 60 miles inland in a place along Rt. 601 about 10 miles north of St. Matthews, South Carolina.
I wasn't back in my apartment here in D.C. until just about 4AM this morning (and my mom back at the next door Northumberland's guest suite).
I will never do another road trip like that again, especially in a group. But my mom and I got there safe and sound and back safe if not fully sound. Also, I saw my dad -- and my parents had a chance to meet and talk while in Charleston at dinner (at a place called Henry's and then at the Grill 225 rooftop bar at the Market Pavilion Hotel.
I also got to see my friend Chris T., who came to Charleston from Atlanta and watched the eclipse with us. And I enjoyed talking to Imara's mom on the extended ride.
My former coworker and friend from Rockville, DD, was also in Charleston.
My dad stayed in Charleston at his motel. Viewing conditions there were sky conditions were quite iffy (which is why the caravan I was with drove inland).
I had numerous text messages, including with Chester, who was in Lafayette, Tenn., with his wife and two young children, as well as a former coworker Jeremy who lives here in D.C. and was within 30 miles of where I was for the eclipse.
I'll have a lot more to say about the total solar eclipse and the trip, with photos, but right now, I must go. I must catch a flight this afternoon to go to yet another DOE workshop as a note-taker, this one in Cleveland. The flight is from National by way of Chicago O'Hare, so in typical American airline carrier, I overshoot my destination by about a third. Also in typical American airline carrier fashion, it is "economy minus" -- necessitated by having to get the cheapest flight possible.
Economy minus is also known as the storage / steerage section, which overlaps with the screaming baby and shrieking two-year / clueless mother section.
Things settle down -- I hope -- by Friday after my late night Thursday return (on the same route but in reverse).
I'll try to post an entry to two from Cleveland, time and free hotel Wi-Fi permitting.
--Regulus
Posted by Regulus at 11:25 AM