Some Late Night Notes from Cleveland -OR- Now Past Totality, This Eclipsed August Nears Its End 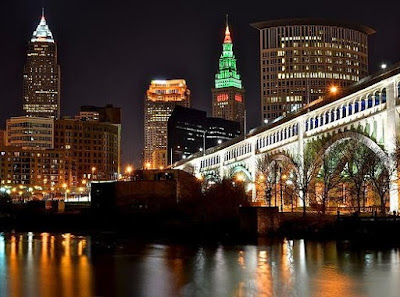 Cleveland skyline at night in an (uncredited) picture.
*******


Late night here in Cleveland.
I'm at the (Breaking) Wyndham Hotel at Playhouse Square here in downtown Cleveland for yet another DOE workshop -- my sixth one this year so far as a note-taker including fourth for AMO. 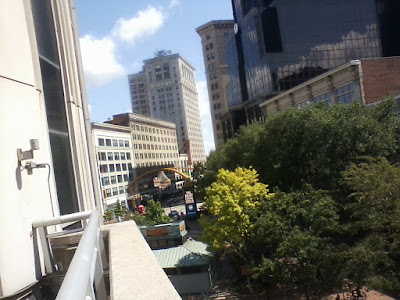 
Yes, I made it here on time -- leaving overheated and over-humid Washington, D.C., on Monday early afternoon. God, it was hot and humid (air temp about 90F and a dew point in the 75F to 77F range, giving a heat index of about 100F). 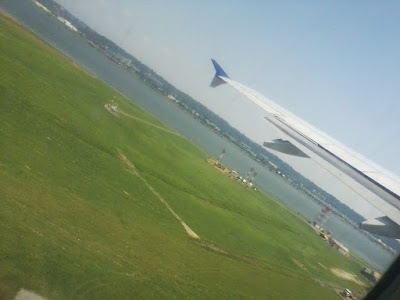 United flight 552 taking off from Reagan Washington National Airport, 2:02PM August 22, 2017.
This picture actually includes a view of the KDCA ASOS weather station (both the temperature sensor and the rain gauge). If you can't make it out, here is a (blurry) blow up of the image: 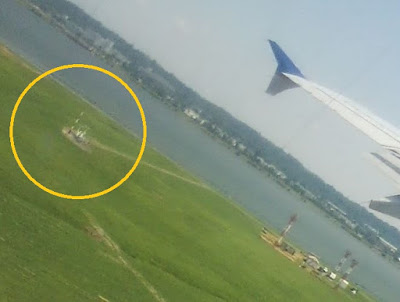 
The journey here to Cleveland via Chicago O'Hare on two United Airlines flights was quick and the first leg to Chicago O'Hare was surprisingly pleasant. I was in the backmost row that I had all to myself and so I was able to take the window seat. And no screaming babies or shrieking two years old. 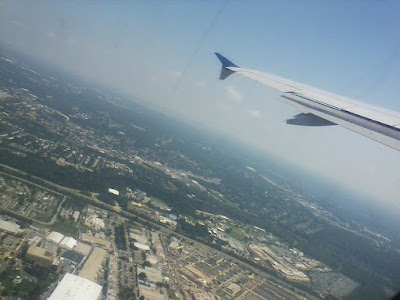 Ascending from National Airport with a view to the east over an expanse of Prince George's County, Md., 2:03PM August 22, 2017.
Obviously, the jet followed the downriver takeoff approach.
*******


The flight to Chicago was over a weather system and into a distinctly cooler airmass. Upon arrival in Cleveland, there were squally rain showers pushing in from Lake Erie. The weather here in Cleveland is pleasant, esp. for late August, with highs today around 75F (although KCLE reached a high of 79F) and tonight presently around 65F. Speaking of the weather, back home it is forecasted to feature high temps under 80F -- around 78F -- for the next five days, which is kind of remarkable for late August. 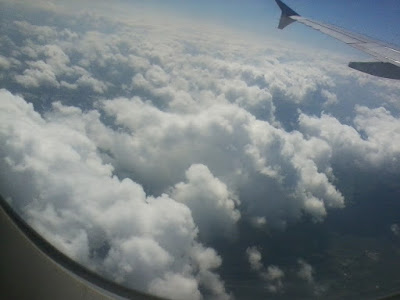 
Earlier this evening, and following a busy day at the workshop, I went to a Mexican restaurant next to the hotel -- Puente Viejo-- with my supervisor and someone else on this workshop trip and we were joined by a fourth person. 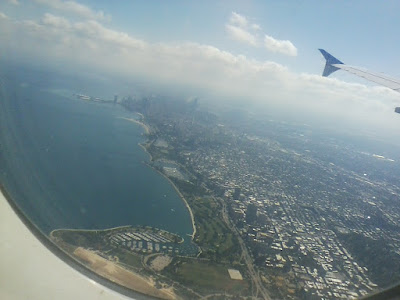 Jet descending over the Lake Michigan lakefront of Chicago into O'Hare Airport, 2:34PM August 22, 2017.
Ah, yes, another visit to Chicago -- although this was just a passing through one. I would like to go to Chicago again this fall (maybe around October) for a few day stay and perhaps with Chris or Brian.
Oh, yes, note that the time here is CDT, not EDT.


As for the workshop, I took a lot of notes -- typing nearly a dozen pages in the breakout sessions I covered. I should mention that my left wrist has been hurting a lot today -- some combination of carpal tunnel and a pulled muscle a result of too much keyboard typing and recent weightlifting. 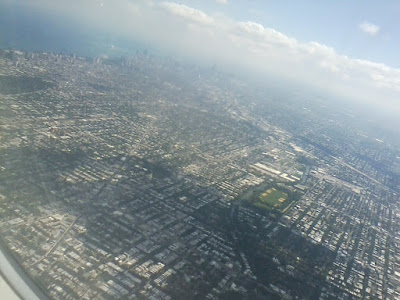 
Other than going there and to the next door YTR restaurant -- where the dinner I had last night of salmon, saffron rice, and Asian mixed vegetables in wasabi was excellent -- I haven't seen diddlysquat of Cleveland except for the inside of this hotel. 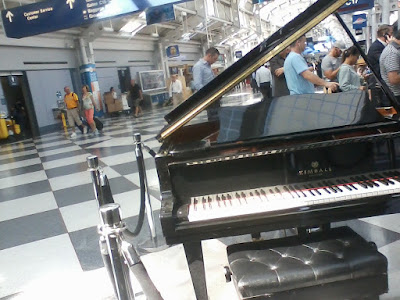 
Tonight, I've been watching the local PBS station since I could not find anything else to watch. I was watching earlier the incredible documentary about the Voyager 1 and 2 space probes called "The Farthest: Voyager in Space."
Awesome program. More on that in a subsequent entry. 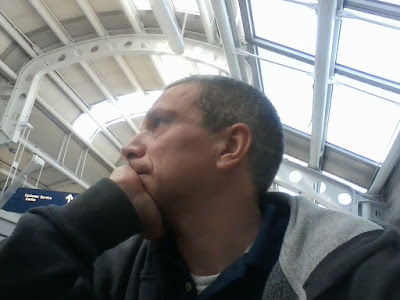 
However, thereafter, I found an episode of The Carol Burnett Show on the local Me-TV affiliate followed by a Perry Mason episode and (as I write this) a Twilight Zone episode. 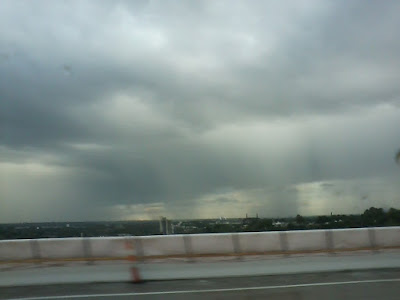 
Alas, I did not make it to the gym on this trip -- and I think I'm getting fat again -- but I'm planning on resuming my normal schedule on Saturday. (I should note that the gym is closed for a few days over the Labor Day weekend for an annual "deep cleaning," and the swimming pool is presently closed for its own cleaning / repainting of the bottom until Sept. 4th. 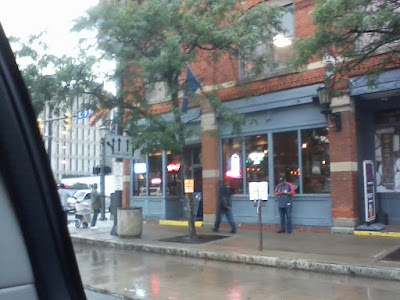 The Brickstone Tavern in downtown Cleveland, Ohio, 7:24PM August 22, 2017.
The Brickstone is located across the street from Progressive Field, home of the Cleveland Indians. There was as baseball game going on -- and lots of people going to it.
I wanted to go there but I didn't get a chance to do so. As for the baseball stadium, I can see the tops of the nearby stadium lights from my 11th floor hotel room.
******* 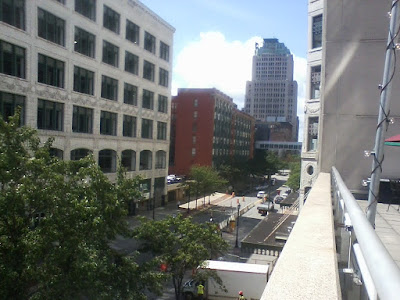 Another view of downtown Cleveland, Ohio, as seen from the Wyndham at Playhouse Square hotel third floor terrace, 12:37PM August 23, 2017.
This is in the opposite direction as the one above.
*******


Following the conclusion of the workshop tomorrow, I return to D.C., in the evening and, hopefully, things settle down a bit after a chaotic last five days that included the total solar eclipse viewing trip to South Carolina. About that eclipse trip to Charleston and inland to see the phenomenal event itself, I won't have a chance to write up an account of it including the photos I took for a week or so. 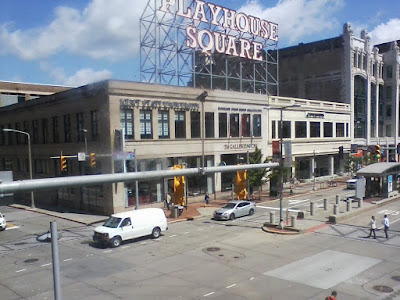 Playhouse Square as seen from the Wyndham Hotel, downtown Cleveland, Ohio, 12:41PM August 23, 2017.
This was the view from the ballroom in the hotel where our workshop's hotel-catered lunch was held.
*******


In the meantime, here are a few good reads by Jonathan Chait and Charles Pierce:
Steve Bannon’s Talent for Destruction
I Have No More Patience for Trump Supporters
Hillary Clinton's Side of the Story Matters, Too
I am not going to excerpt them now but please do read them. 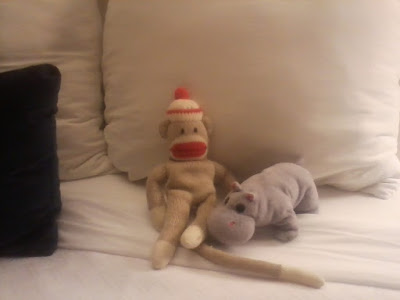 My plush spider monkey and one of my plush hippos that I brought here on this trip here to the hotel, Cleveland, Ohio, 10:42PM August 23, 2017.
The rest of my plush monkeys and pod, er, bloat of plush hippos are back home.
*******


OK, that's all for now. My next planned entry will be on Friday.
--Regulus
Posted by Regulus at 1:54 AM