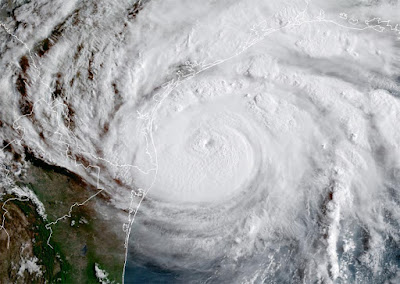 
Tonight, Hurricane Harvey is bearing down on the Texas Gulf Coast -- zeroing in on Corpus Christi -- with fantastical amounts 20 to 40 to (according to a Euro model run) 60 inches of rainfall possible and resulting widespread catastrophic flooding forecasted as a result of the fact the system comes ashore and moves little for the next four to six days. While the Euro model certainly has convective feedback issues in that, even half the amount would be catastrophic. 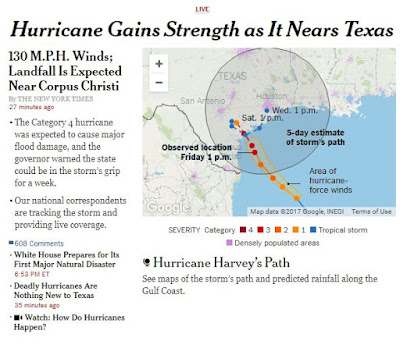 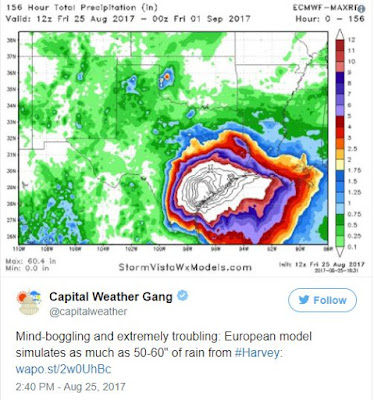 
There is also the matter of Harvey having intensified to a category 4 hurricane as of 7PM CDT this evening with top sustained winds of 130MPH. The central pressure is down to 941mb (27.79" Hg). Forward motion is NW at 8MPH. The center tis located at 27.8N, 96.8W or 35 miles east of Corpus Christi. 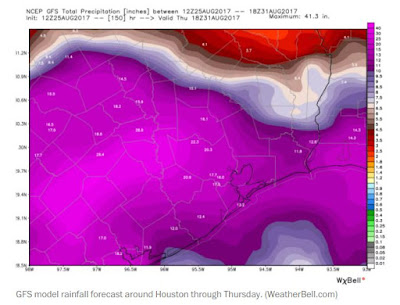 
As for the storm surge, this is also from tonight's 7PM CDT NHC advisory:
STORM SURGE: The combination of a dangerous storm surge and the tide will cause normally dry areas near the coast to be flooded by rising waters moving inland from the shoreline. The water is expected to reach the following heights above ground if the peak surge occurs at the time of high tide. 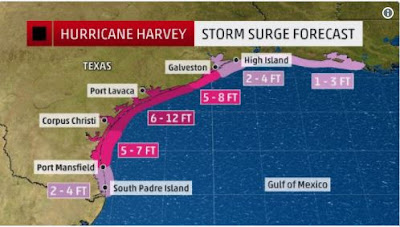 The deepest water will occur along the immediate coast near and to the northeast of the landfall location, where the surge will be accompanied by large and destructive waves. Surge-related flooding depends on the relative timing of the surge and the tidal cycle, and can vary greatly over short distances. For information specific to your area, please see products issued by your local National Weather Service forecast office. 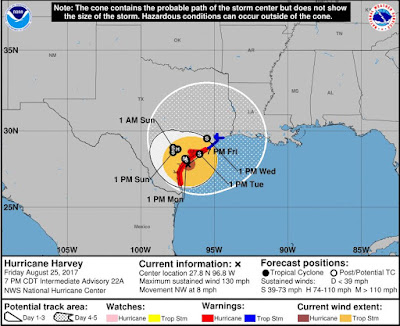 
Here is the CWG entry about it that is being updated (link embedded): Harvey intensifies to Category 4 storm, destructive winds and 'catastrophic' flooding expected in Texas
Note: In dangerous weather situations such this one, the CWG entry titles often changes.
Here is another one (link embedded): Storm surge looms as dire threat from Hurricane Harvey 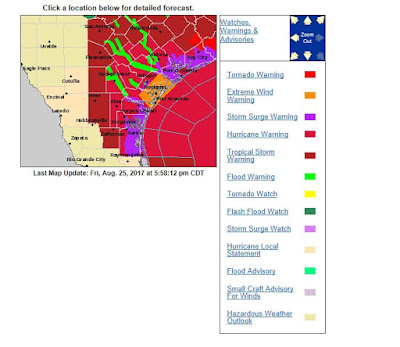 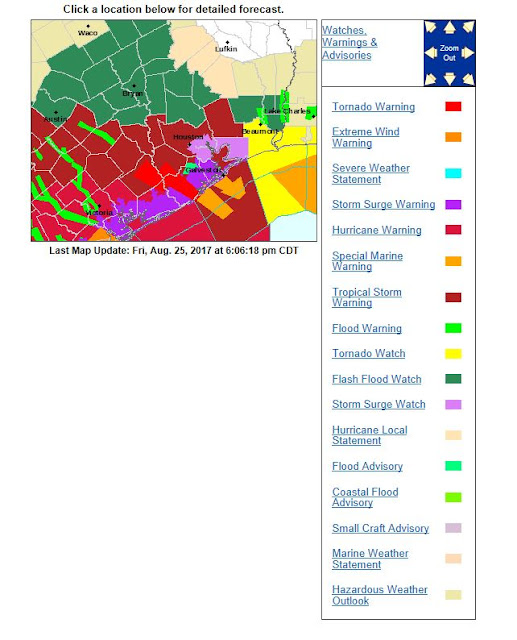 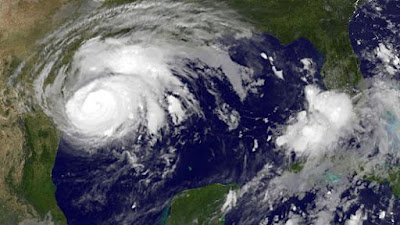 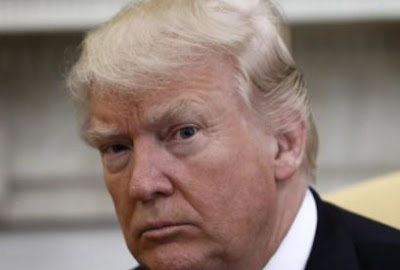 On a political note -- and this has to be said -- this will be the first large-scale disaster to confront the Trumpizoidal White House and, naturally, it's completely unprepared for it and instead the mentally unstable Trump will make it all about him while wildly lashing out and insulting everyone else.
Oh, compounding the likelihood of a massively botched response that exacerbates things, the affected region has Sen. Ted Cruz and that vile little pudge-ball creature Blake Fahrenheit Farenthold (whose existence as the GOP Congress-creep for that part of Texas has been made possible by all that wild gerrymandering of the Texas state legislature that the federal courts keep knocking down over and over and over again). 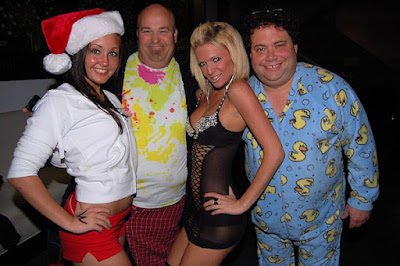 Maybe they can hold town hall meetings to explain why billionaires need another tax giveaway at the expense of their health insurance and why "global warming" -- which is certainly "juicing" these monstrous storms -- is a "Nancy Pelosi Democrat" hoax. And the folks down in them parts there might just buy that shit. Or at least some of them.
To that end, here is a comment by Alex1952 in the CWG entry (which has over 1,500 comments already) that is right on target:
Trump and his advisers are already meeting in the White House to plan their response. On who to blame. Odds are it will be Obama, but Hillary is running a close second, with Schumer, Pelosi, and the entire Democratic Party tied for third. McConnell, McCain, and Ryan are possible dark horses.
OK, that's all for now. My next planned update will be tomorrow evening. For tonight, I'm meeting Fred at Annie's and then Jeremy at Trade. Tomorrow is a planned regular gym day. I need to post some additional Cleveland pictures and, of course, my South Carolina eclipse trip pictures.
--Regulus
Posted by Regulus at 9:04 PM