Approaching Totality: Preparing to Go to South Carolina for the Great American Eclipse of 2017

Great American Eclipse of August 21, 2017 - animation of the Moon's umbral and penumbral shadows.
The Moon's shadow moves in the same direction that the Earth rotates because the Moon is rotating about the Earth in the same direction -- only much more slowly than the Earth revolves on its axis, which is why the Moon appears to rise in the east and set in the west on any given day but over the course of approx. 27 days, "retrogrades" from west to east.

This animated image shows it (although the actual orbit is slightly elliptical, not a perfect circle):

Animation of the Moon revolving around the Earth over the course of 27 days.
*******


Yes, yes, I know, I know: I was supposed to post an eclipse-themed entry last night but instead posted this one.
I don't have time to post such an entry -- and I'm quickly running out of time before my scheduled departure tomorrow morning to Charleston, S.C., with my mom and Andrea & Co. In addition -- as I mentioned here -- not long after I get back late Monday / early Tuesday (as in, less than 12 hours), I have to fly to Cleveland for another work-related workshop.
I am scheduled to return late Thursday so things really won't be settled down until next weekend. During this time, I am unsure how much opportunity, if any, I will have to post entries, although I will be taking my PC with me down to Charleston and to Cleveland. 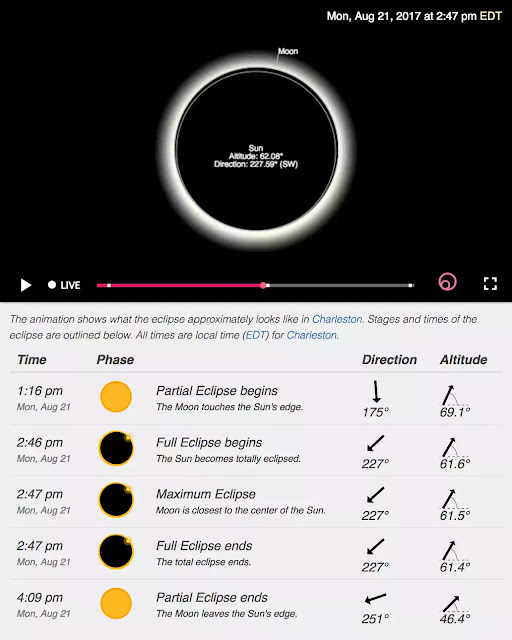 
Right now, I'm leaving work early in order to meet my mom at Union Station. She's staying tonight in the guest suite in the building next door to mine -- that is, the nice Northumberland where my friend Fred lives, located cheek-by-jowl next to my Hampton Courts -- and then we leave by van tomorrow morning by 9AM.
It's a long drive to Charleston. I'm not driving, of course, but just along for the ride -- and the sort of "Spiritual Advisor" for this total solar eclipse trip (which means it is certain to be cloudy; the forecast is iffy.)
For tonight, I need to figure out where to go to dinner with my mom.
OK, that's all for now. I'll try to post another entry tonight.
--Regulus
Posted by Regulus at 3:11 PM