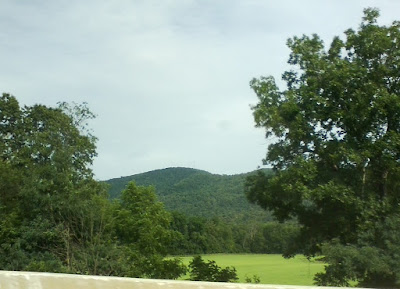 
I'm back in D.C. following my 2-1/2 day work trip to Pittsburgh with two coworkers. The ride back was far less pleasant than the drive there -- simply because we took the Pennsylvania Turnpike to Breezwood, Pa., and then I-70.

There is something very unpleasant about the Pennsylvania Turnpike. Too many damn tractor trailer trucks and too much high speed traffic -- not to mention all those ugly highway gas/food rest stops. As a toll rode, it's also obnoxious.


As I mentioned in my previous entry, the Tuesday ride to Pittsburgh was really nice -- a fact likely due to the time of day we traveled, the weather conditions, and the route (namely, I-70 to Hancock and then I-68 through western Maryland to Keysers Ridge and thence onto U.S. Route 40 (the old National Road / National Pike) through picturesque Uniontown and into the Pittsburgh area from the south). 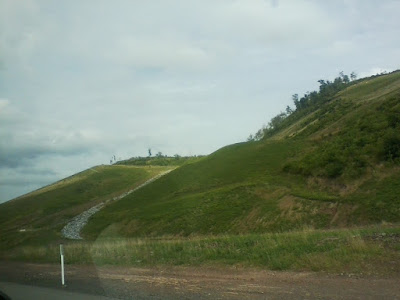 Another view along the Pennsylvania Turnpike, 4:47P August 10, 2017.
This was 11 minutes prior to the lead picture, so it was probably in Somerset County. I took this picture because the hillside reminded me a bit of that landscape in the opening of Teletubbies.
*******


Actually, I got back yesterday evening, but I didn't have the chance to post an entry last night. I was dropped off by my coworker at the Rockville Metro (where no fewer than 6 trains went in the direction of Shady Grove while I waited like an idiot for a Glenmont-bound one to take me back into D.C., but this is par for the Metro course).
I got home and went quickly to the gym, where I spent about an hour weightlifting and then had a swim in the pool. I skipped any treadmill stuff since I had gone the two previous days while at the hotel in Pittsburgh and, besides, I didn't have enough time.

The old Post Office Pavilion and now the frickin' Trump International Hotel Washington, D.C., Washington, D.C., 8:38PM August 7, 2017.
This is where all of Putin's oligarchs stay while in Washington carrying all their laundry, so to speak, that Trump and his little familial Cosa Nostra helps to clean.
*******


Upon arriving home, I gave myself a buzz cut with my Wahl clipper and then showered and, afterwards, made dinner. I also watched two very funny old reruns of Newhart on Antenna TV.
The weather this evening is mostly cloudy, warm, and humid (KDCA 6PM air temp 81F and dew point 71F). The day was actually not much warmer than that -- continuing the very welcome paucity of 90+F days recently. There is a chance of showers and t-storms. 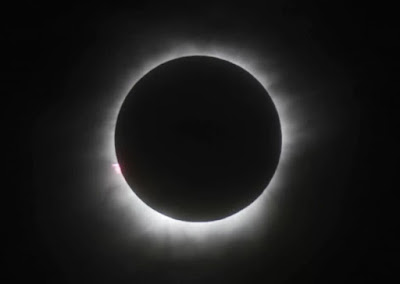 
So we are now within 10 days of the Great American Eclipse of August 21, 2017 and it is close enough for the longer range weather models including the GFS to start giving an idea of the weather forecast and hence sky conditions for that day, specifically, for coastal South Caroline where I am planning on being to view it.
A few days ago, the GFS had widespread showers and thunderstorms for the Southeastern U.S., but as of now, it looks a bit more promising in terms of less areal coverage and less cloud cover. 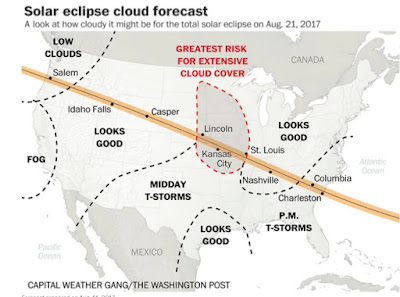 
Recall that I am going to South Carolina with my mom, my dad, and one of my best friends (Andrea) along with Imara (her husband) and her in laws (Imara's parents). Jake and his girlfriend are supposed to be there as is my friend Chris T. from Atlanta.
I'm mentioned before that my dad is coming up from Florida to join the rest of the group. This will be the first time my parents have met since January 2013 (at my late great Aunt Babe's 100th birthday party in New Jersey) and, honestly, I don't know how many more times they will meet.

Climatological likelihood of clear skies for August 21st with total solar eclipse path shown.
No legend is provided for the blue-to-white shading, but the bluer the color, the more likely for clear skies.
*******


News of the eclipse is now quite widespread and multi-faceted (in terms of "hook" topics) across the U.S. and most folks are at least vaguely aware of it. How many people are planning on being somewhere along the 3,000-mile path of totality is unclear -- but it will certainly be in the millions, if not few tens of millions. 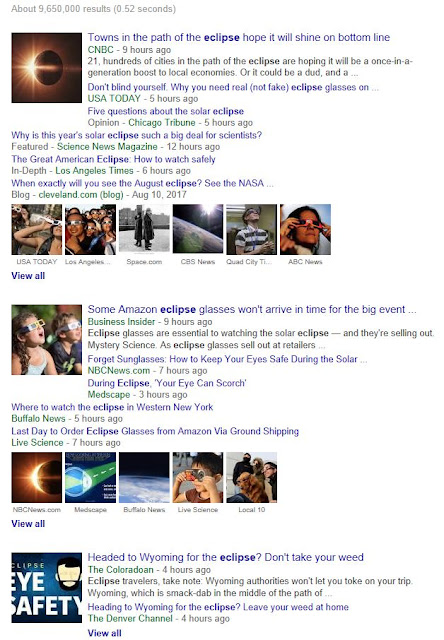 Screenshot of aggregated Google news of upcoming total solar eclipse news, 7:45PM August 11, 2017.
As you can seem, much of it involves eclipse-viewing safety (and, despite more nuanced information including the fact that it is perfectly safe to view a total solar eclipse with the naked eye during totality, the still over-the-top warnings that start to blend into superstition). I do like the (bottom) one from Colorado about not bringing your weed to Wyoming.
*******


The CWG's Jason Samenow posted this nice entry featuring excerpts of moving pieces by those who have witnessed total solar eclipses and the impact such an event had on them: These powerful, moving solar eclipse reflections will compel you to watch on Aug. 21.
This includes a memorable piece by Mabel Loomis Todd, the American editor and writer best known for her publications of Emily Dickinson poems. I posted in the comment section my own recollections of seeing the Feb. 26, 1998 eclipse in Guadeloupe with my father. 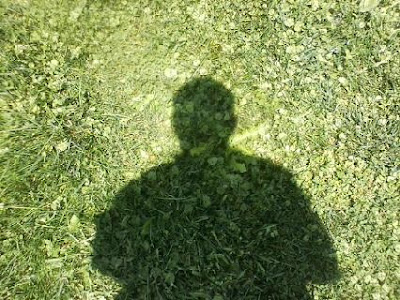 Me and my shadow as seen outside a McDonalds in Grantsville, Md., around noon, August 8, 2017.
Yes, we stopped at a McDonalds for lunch. The three of us talked about Obamacare and America's health care versus those of other First World countries. That seemed to attract the interest of the table next to us.
*******


OK, rather than opening up a whole new line of political commentary on all disasters Trump and the GOP, I think I'm going to end this entry now.
Oh, yes, for today ... 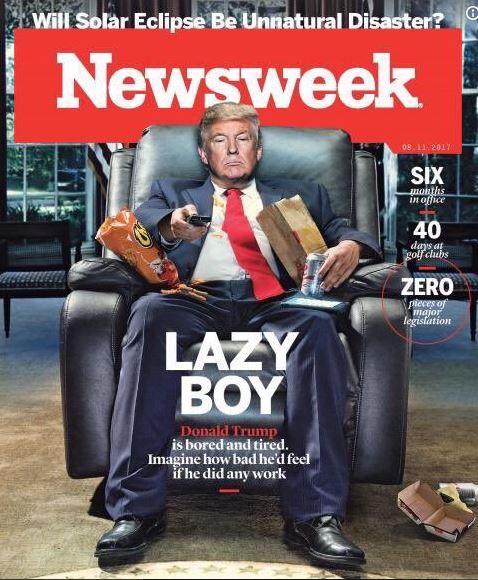 
My plan for tonight is to get dinner and then go to Trade. Tomorrow is a gym day followed by laundry. I intend to post my usual two Saturday night entries. For Sunday, my ostensible free day, I dunno ... I'll figure something out.
--Regulus
Posted by Regulus at 8:00 PM