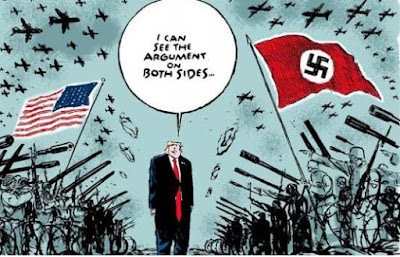 This is the high-level message of this entry (link embedded): Trump Opens Breach With C.E.Os., Military and G.O.P.
Wow.


By the way, I hate the lack of the use of the serial comma.) 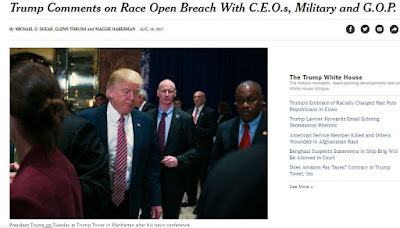 
So we're now at a point where our white supremacist-loving, morally-perverted, highly-unstable and dangerous "Commander-in-Chief" -- the Vulgar Talking Yam of a President* who is unwilling / incapable of seeing the difference between neo-Nazis and Klansmen on one side and basic humanity, decency, and morality on the other -- is in a cornered and dangerous state, and his enablers and apologies around him aren't quite sure what to do. 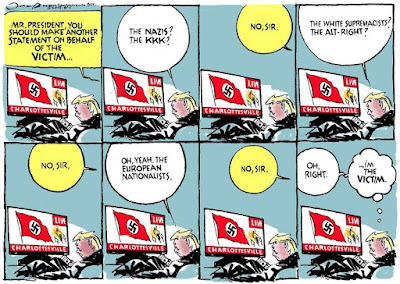 Of note, here is the garbage that his personal lawyer -- some onion-domed piece of offal named John Dowd -- sent out to the usual farrago of rightwing pundits and assorted Trump enabling types:

Portion of Trump lawyer John Dowd's email comparing George Washington to Robert E. Lee, August 15, 2017.
This was actually supposed to be an argument that made everybody go, "OH, YEAH, the flawed founder of the country and the top military rebellion commander in favor of an slave-based, agrarian theocracy ARE the same!!" not to mention, "TRUMP IS THE GREATEST, EVER!!!"
******* 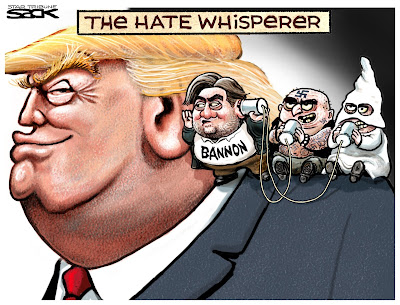 On one level, the failure here is to realize that the GOP inverted Marxist-libertarian "agenda" of the corporate-oligarchical overclass must be carried out carefully, not with an air horn and a sledge hammer. 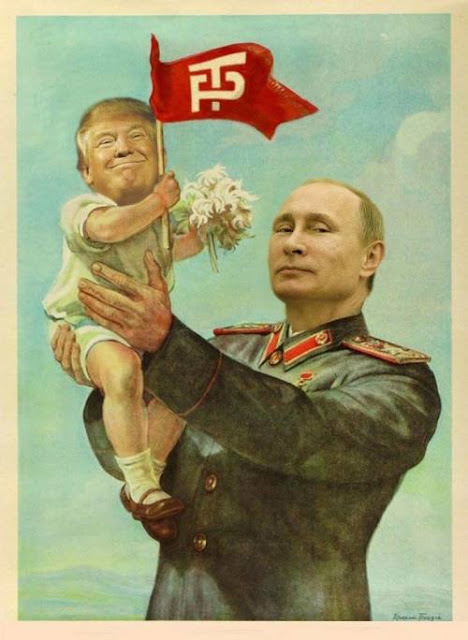 We're actually surprisingly -- disturbingly -- close to a President Mike Pence (still staring moon-eyed at Trump) and his nightmare (but otherwise sober and not mentally deranged) rightwing theocracy.
I'm not usually in the habit of point-blank agreeing with Cornel West, but Trump is nothing short of a neo-fascist gangster -- and is quickly becoming toxic to the GOP. 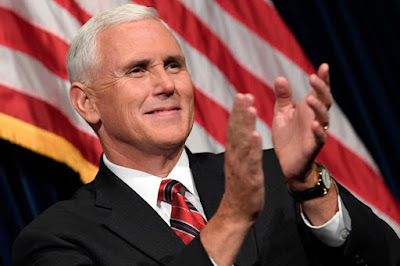 Now I don't see this morally degenerate, white supremacist-loving Vulgar Talking Yam resigning or being convicted in an impeachment, but I don't see how he survives for the next 3-1/2 years (even though we aren't a parliamentary democracy or a Third World kleptocracy -- take your choice).
I would like to note this excellent piece by Ross Douthat: Our House Divided.
A message of hope from another reality ... 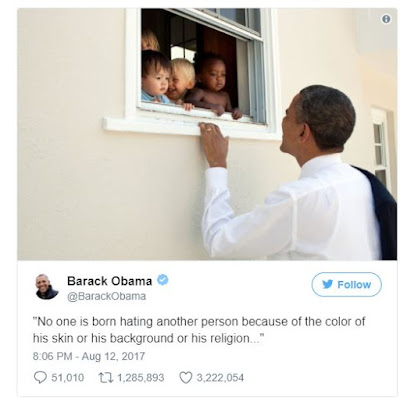 
BTW, here is how Fox News Channel tried and SPECTACULARLY failed -- but in a profoundly good way -- to have a "conversation" about whatever bullshit they thought was conversable: 'Fox & Friends' Host Miserably Fails To Moderate Emotional Exchange On Race.
Here is the YouTube clip of it:
God bless Wendy Osefo and Gianno Caldwell for what they said and how they said it on that goddamn toxic network. If that kind of discussion is going on over there, that can only be a good thing.
*******


OK, that's all for now. I do need to post a total solar eclipse-themed entry. The trip to South Carolina to see it (hopefully, without clouds!) is now just days away.
--Regulus
Posted by Regulus at 1:23 AM