A Few Late Night Notes from Pittsburgh (with Some Pictures of the Allegheny Mountains and of Uniontown, Pennsylvania) 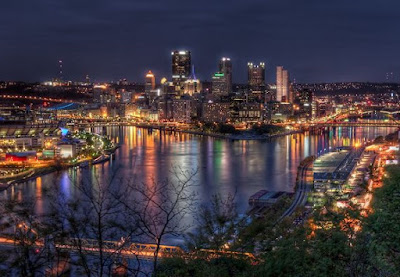 
A brief OK, a not-so-brief late night update from Pittsburgh.
I have (free) Wi-Fi here in the hotel, but I didn't get a chance to post an entry last night since I went out with my two coworkers and by the time I got back to the room, I just needed to go to bed. We went to a place called the Church Brew Works -- and it was actually once a vaulted Catholic Church that had apparently fallen into disuse / disrepair. It was St. John the Baptist Roman Catholic Church, but it has been its current bar/restaurant incarnation for 21 years. 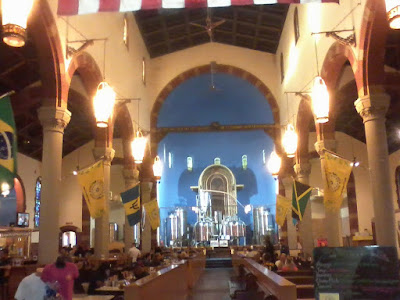 
Seeing the giant beer brewing tanks and related equipment at what was once the altar was kind of, well, disturbing. In fact, the first image that flashed through my head when we walked in -- after taking an Uber there -- was of that scene in Beneath the Planet of the Apes with the "Alpha and Omega" doomsday bomb in the altar of what had been St. Patrick's Cathedral and worshipped by the human mutants. 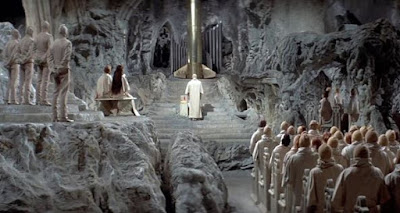 
Having said all that, the food and drink were just fine and we had a very nice young server (Moira), who (like I) was originally from New Jersey.
The weather yesterday when we arrived after the drive here from D.C. was just stunningly lovely -- and not at all August-like but more akin to early autumn -- with an air temp about 72F and a dew point for a while at 49F before notching up to about 55F. Last night was actually cool with the airport (KPIT) recording a low of 54F (which is 8F below the normal daily low of 62F at KPIT). 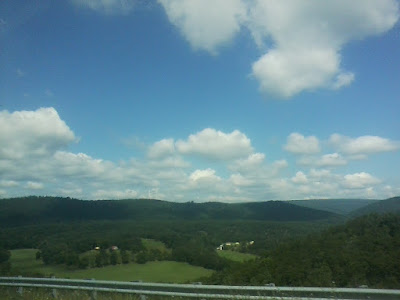 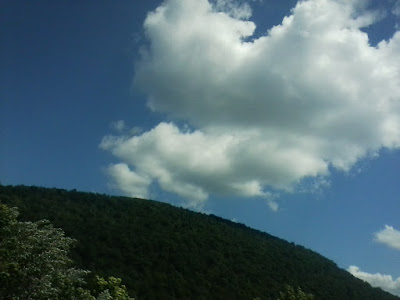 
This was a far nicer ride -- especially on the lovely high summer but not at all hazy/hot/humid day. (On the previous trip, after 2 hours of D.C. area traffic jams, we were riding at night through endless dark nowhere and the thick mist that fell for a period of time made it seem even more middle-of-nowhere-y.) 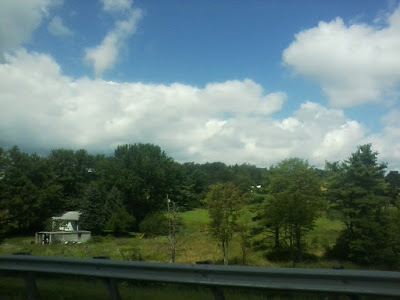 Another Western Maryland bucolic view from I-68, 12:13PM August 8, 2017.
I think I impressed my riding companions by knowing the names of so many of the mountains of western Maryland -- such as Sideling, Big Savage, Dans, and, of course, Negro. These are actually elongated ridges of the Alleghenies that run for tens of miles in elongated folds (and that have the occasional high spot that has another mountain name, e.g., Mt. Davis in Pennsylvania is the high spot on Negro Mountain).
*******


On this trip, we went through Uniontown, Pa., and I was surprised at what a lovely picturesque town it was. However, I'm not sure I believe that Uniontown was actually incorporated as a town on July 4, 1776. 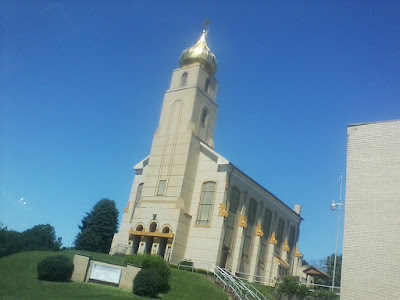 
Of note, the town's population is down over half from its 1940 Census peak, or so says the Keeper of All Knowledge. Among its local notables was George Marshall -- General, Chief of Staff of the Army, Secretary of State, Secretary of Defense, and author of the post-WWII Marshall Plan. The latter is commemorated on a mural in the town (although I didn't understand the "George C. Marshall Plan II" part; was there a Marshall Plan I??). 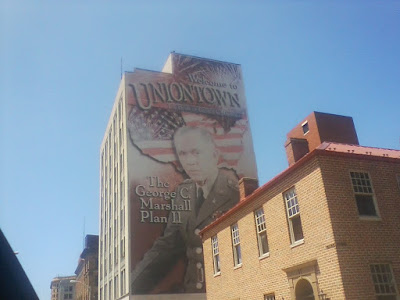 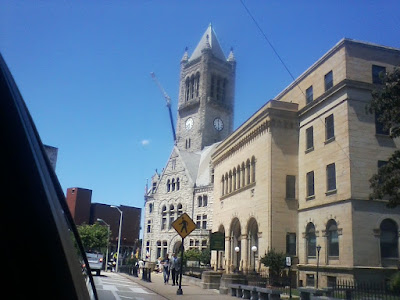 
While here in Pittsburgh, I managed to go the fitness room and the little indoor pool here in the hotel two days in a row. While I got in a jog both days on the treadmill -- 5+ miles each time -- the fitness room only had one set of free weights and nothing else, so there wasn't much I could do by way of weightlifting. 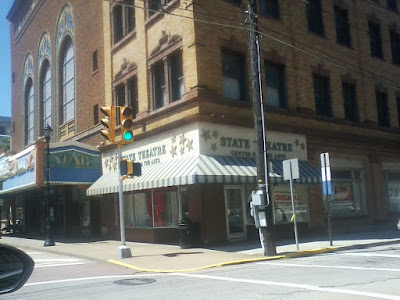 
Earlier tonight, I went with one of my coworkers to a nearby TGI Fridays which, actually, turned out to be fine. For tomorrow, the workshop ends around 2PM and we are driving back to D.C., although how long that takes is anyone's guess. I will go to Rockville and take the Metro back into D.C. 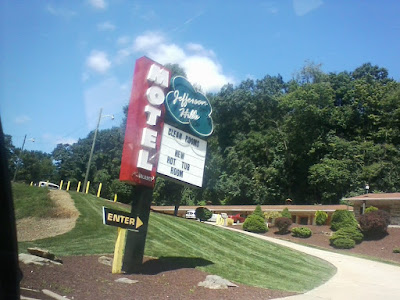 
This work trip has been basically fine, although today I had some stomach issues that required me to run back to this hotel (the Cambria) from the workshop venue (the nearby Marriott) during a break. Oh, and taking all those notes during a vigorous back-and-forth while feeling that way was kinda difficult. Also, I'll still need to write up my notes into something coherent when I get back. 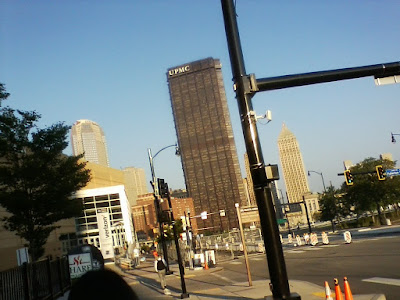 View of downtown Pittsburgh, Pa., from outside the Cambria Hotel, 7:35AM August 9, 2017.
Today was a much warmer and more humid day.


Tonight, I had a nice conversation with my dad. I hadn't talked to him in a while. He is planning on coming to South Carolina to see the Aug. 21st eclipse. I'll be there with my mom and Andrea & Co. I should note, though, that the long-range weather forecast (out to day 12) isn't looking that promising with a lot of showers and t-storms, but a day 12 forecast has quite low confidence. 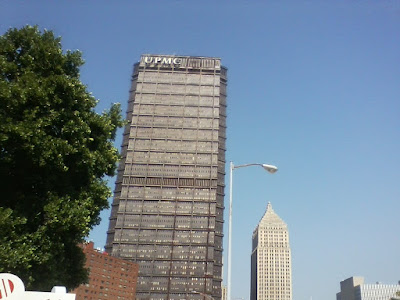 A view of the old U.S. Steel Tower, Pittsburgh, Pa., 10:48AM August 9, 2017.
This is a weird modernist building -- now 50-years old and old-looking thanks to the COR-TEN steel used on the exterior and with what at least appears to be actual roll-down window shades on its hundreds and hundreds upwards of ten thousand windows. The UPMC logo on it is for the University of Pittsburgh Medical Center, which leases the top floors. The building is 841 feet (64 stories) high -- making it presently the tallest building in Pittsburgh.
COR-TEN steel (weathering steel) -- a registered trademark of, yes, US Steel -- oxidizes to form the shit dark brown color you see. This oxidized layer apparently resists corrosion.
*******


OK, that's all for now. I'm refraining from any and all political commentary about anything Trump said or did in the past few days including the crazy, off-the-cuff comments about nuking North Korea.
Oh, yes, here are my two plush stuffed animals I bought on this trip ... 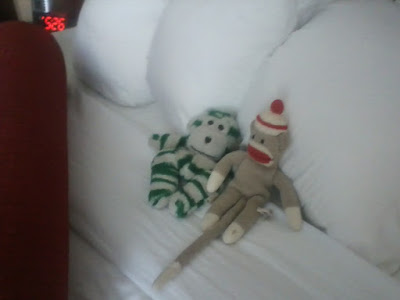 Randy (the green-and-white-striped monkey) and my plush spider monkey.
I bought the spider monkey to Dallas, as well, but this time, I brought along another monkey rather than a plush hippo.
OK, good night. My next planned entry will be on Friday.
--Regulus
Posted by Regulus at 1:01 AM