Two Minutes to Midnight: A Brief Monday Late Night Posting with a Pair of Lovely Pictures 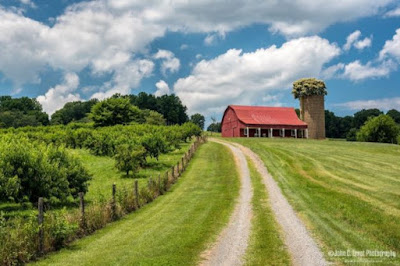 Bucolic farm scene taken in Delaplane, Va., earlier this month; photo by John Ernst.
The above picture and the one below are from recent CWG entries including this one and this one.
*******


Home tonight after a Monday back-to-work workday and a Monday night gym visit. I'm watching TV -- the pair of Wings episodes aired on Antenna TV (remember I don't have cable but just a digital antenna). I'm rather chagrined, though, that whoever makes programming decisions replaced the pair of Becker episodes with a pair of frickin' Family Ties ones.
Much like Three's Company, I just have been able to get into Family Ties. Newhart is still on at 1AM and 130AM. As for the commercials aired on Antenna TV, well, let's just say thank God for the mute button. 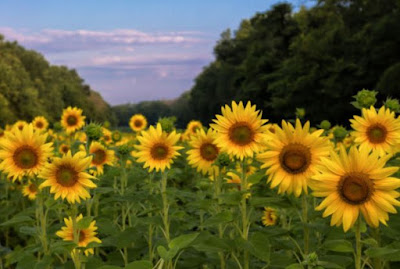 Sunflowers in a field in or near Poolesville, Md., as seen on July 17, 2017; photo by Kathy Swendiman.
I think this image might have been taken at the Maryland DNR's McKee-Beshers Wildlife Management Area just outside Poolesville.
*******


As for the gym, I had an overall good multi-part workout except I kinda crapped out on the jog. I managed to do 3.33 miles -- but I just can't do the hour-long / 6+ mile jogs these days. As it is, I've shifted more to weightlifting. I did a bit of a core routine tonight and then finished with a swim -- really, that's more of end-of-workout relaxing thing.
OK, I'm going to post this entry before midnight so I can have a Monday entry. (Well, actually, I already posted it so it would have a certain time / date stamp, but then I reverted it to draft form. I didn't actually finalize it until 1217AM Tuesday, so I guess technically I cheated.)
Anyway, I would like to post an entry containing the two dozen or so pictures I took yesterday after I got back to D.C. following my weekend visit to see my mom. These pictures include one in which I got caught in a deluge in Georgetown. However, I'm rather tired, too, at this point and might not do it. Tomorrow is a non-gym night and I usually don't post entries on those nights.
--Regulus
Posted by Regulus at 11:58 PM