On the Passing of Legendary D.C. Street Artist COOL "DISCO" DAN and His Washington World

(Apologies, but I just don't have a lot of pictures for this entry and couldn't readily find appropriate ones.) 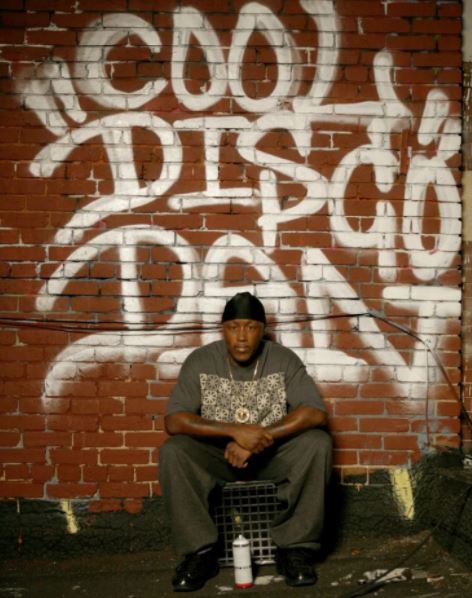 Danny Hogg, a.k.a., Cool "Disco" Dan, photo by Ned Needham.
Legendary street ("graffiti") artist Danny Hogg -- known by his "tag" COOL "DISCO" Dan -- has died.
You must be of a certain age with a certain life history in Washington, D.C., to appreciate the significance Cool "Disco" Dan: What that graffiti tag meant. Now I don't mean you have to be a native born Washingtonian -- I'm certainly not -- but it certainly helps to have some history here. (I count mine as stretching back 25 years to 1992, although that includes 8 years living in College Park and 6 months in Silver Spring.)
I say this in order to be able to put Cool "Disco" Dan in his proper place and time: The world of Washington, D.C., in the 1980s into the early 1990s, during the turbulent, disjointed Imperium of Marion "Mayor for Life" Barry and the worst of the crack epidemic and its attendance murder and mayhem, before the massive waves of gentrification set in that have transformed this city into the strange, half-utopian/half-dystopian organic millennial playground that it now is in 2017 (though that's not to say there aren't still vexing and persistent urban pathologies and attendant suffering -- there are).
So what I'd like to do is repost the Washington Post story noting Mr. Hogg's passing and his life. He died last Wednesday (July 26th) from complications due to diabetes. He was 47. Note that this article contains a link to the October 1991 Washington Post Style section feature article on Mr. Hogg (direct link embedded): Mark of the Urban Phantom. (FYI, his last name is pronounced "Hogue," not "Hog.")
(I was at the horrible St. Mary's College when that piece came out. Like an idiot, I used to read The Post religiously back then. Obviously, only the print edition existed then.)
Also, this article gives a different story about the origin of the name Cool "Disco" Dan than in that 1991 piece -- which invoked a character (which I don't recall) from the TV sitcom What's Happening!
Lastly, the comments to the article reflect the predictable (and ugly) issues of racial relations (and the dreaded white privilege), class and gentrification, obeying the law, and a whole laundry list of stuff, none of which I want to get into now except this: "The marketplace of ideas ... " Horseshit. Everybody hates everybody and nobody listens to anybody -- or ever admits they were wrong on anything.
--Regulus 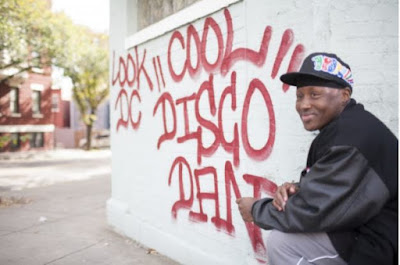 
Danny Hogg, the prolific Washington street artist who plastered the city with his tag, Cool “Disco” Dan, died of complications from diabetes on Wednesday. He was 47.
Mr. Hogg’s tag became an enduring symbol for a city that had endured a lot. He was at his most prolific in the late ’80s and early ’90s, an era when D.C. was known as the country's "murder capital" and then-Mayor Marion Barry was arrested for using crack cocaine.
"When you think of D.C.'s turbulent times, what happened and where the city came from, he is an icon of that era,' said Roger Gastman, a documentary filmmaker who produced a movie, "The Legend of Cool 'Disco' Dan," about Mr. Hogg and the D.C. street art scene. "There's not many left. He's a folk hero." 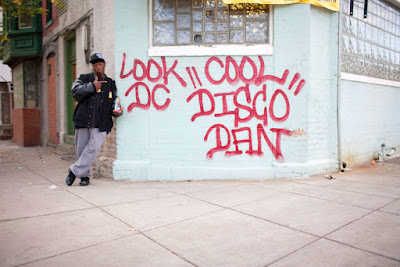 Mr. Hogg grew up in Capitol Heights, Md., and spent most of his childhood drawing, said his mother, Denise Womack. He got his nickname from going to go-go shows, and spent his teenage years spray painting that name on buildings across the city.
"I would give my kids allowance for doing errands in the house, and he would use the money to buy spray cans and markers,” said Womack, who recalled throwing them in the trash whenever she found them. "The police came to our door many times -- 'Oh, your son was writing on government buildings,' " she said. 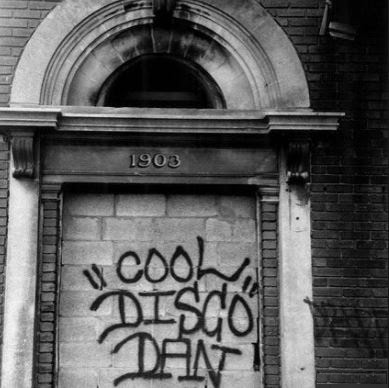 His graffiti style was "very plain, simple, in your face, the bare bones of graffiti," said Asad Walker, a graffiti artist and friend of Mr. Hogg's. "I think the overall D.C. style, still to this day, can be kind of simple and straightforward. That aesthetic was promoted by him." 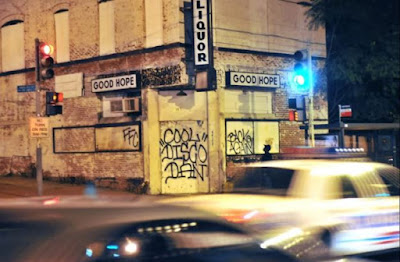 Mr. Hogg with one of his tags on Good Hope Road (Photograph by Rosina Teri Memolo).
In 1991, Mr. Hogg was profiled by Washington Post reporter Paul Hendrickson, who accompanied him on a late-night tagging binge.
"Almost always this is an after-midnight man. He finds a wall. He Hancocks it. He’s gone," Hendrickson wrote.
Some thought he was the most prolific graffiti artist in D.C., but that wasn't true, Gastman said. "I bet other people had their name more. Dan just picked the best spots."
Like along the Metro's Red Line, where commuters could see his tag every morning. Or on the former Washington Coliseum. Or along the 14th Street Bridge.
"He thought long and hard about where to put it," said Joseph Pattisall, who made the documentary with Gastman. "He would go back and trace it to get it as thick and as bold as he could. He took more risk than pretty much anybody." 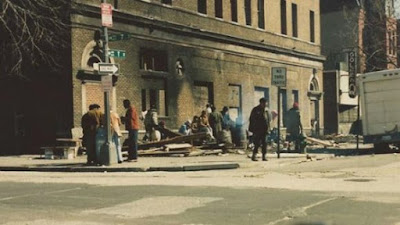 T and 7th Street NW, Shaw, Washington, D.C., 1988
He had run-ins with the cops, of course. But Mr. Hogg’s notoriety preceded him, and his relationship with police was not entirely adversarial. Walker remembered a time when the two of them were painting graffiti in Edgewood Terrace and heard gunshots nearby. They decided to leave, and were walking down Rhode Island Avenue, when a police cruiser passed by them and slowed down. 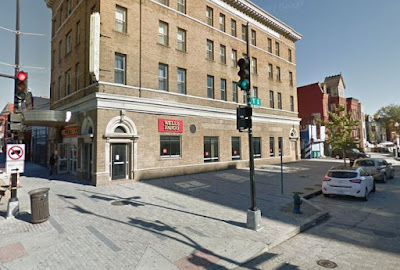 T and 7th Street NW, Shaw, Washington, D.C., Nov. 2016 (Google street view).
"I was like, man, if these cops turn around, I'm dumping all of these cans," Walker said. "The cop car does a U-turn and comes back to us, and the cop is like, 'Hey Dan!' It was 3 a.m. The cop recognized him from behind. That's how famous he was."
In person, Mr. Hogg was reserved and shy.
"Graffiti is a funny thing, because you want everyone to know you, but you don’t want anyone to know you at the same time," Pattisall said. 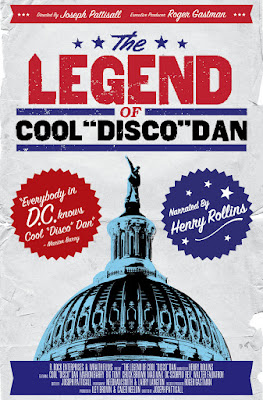 Mr. Hogg stopped tagging in the early 2000s. But he experienced a bit of a comeback in 2013. That was the year Gastman's documentary made its debut, and an increasingly gentrified D.C. experienced a collective nostalgia for the city’s bygone culture -- but a sanitized version of it. Cool "Disco" Dan found his work displayed in the Corcoran Gallery of Art for "Pump Me Up," a tribute to D.C.'s graffiti and go-go culture.


It also briefly inspired the name of a doughnut shop -- Cool “Disco” Donuts -- which sparked an angry discussion about appropriation in a city where several white-owned restaurants are named after black artists. 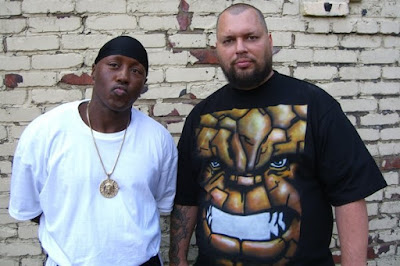 In addition to his diabetes, Mr. Hogg struggled with mental illness, poverty and homelessness throughout his life. He didn't attend some of the screenings of his documentary because he couldn’t be reached. His final residence was a state-funded group home in Fairfax, Gastman said, who, along with Pattisall, maintained a relationship with the artist after their documentary was produced.
Mr. Hogg was wary about this turn in the spotlight, but eventually warmed to it, said his friend Rosina Teri Memolo, a local photographer who has documented his work.
"He was always happy to sign things and to make people’s day," she said. "I think that was one of his favorite things, the love that he got. I think he thrived off of that and he appreciated it.
Most of Mr. Hogg's tags have been erased now -- painted over, or gone because buildings have been replaced by condos and offices. His friends said that in recent years, he had come to embrace his legacy as D.C.'s most famous street artist.
"He knows, without being egotistical, that Cool 'Disco' Dan is an icon of D.C.," Gastman said, still speaking in the present tense about his friend. "He knows that it has become larger than himself."
Posted by Regulus at 11:49 PM