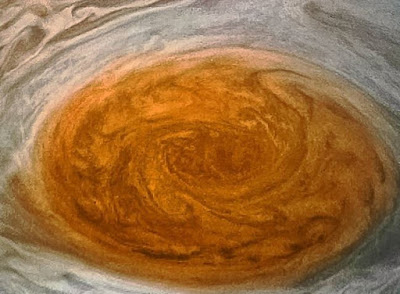 
Explanation from the NASA Juno website:
Measuring in at 10,159 miles (16,350 kilometers) in width (as of April 3, 2017) Jupiter's Great Red Spot is 1.3 times as wide as Earth. The storm has been monitored since 1830 and has possibly existed for more than 350 years. In modern times, the Great Red Spot has appeared to be shrinking. 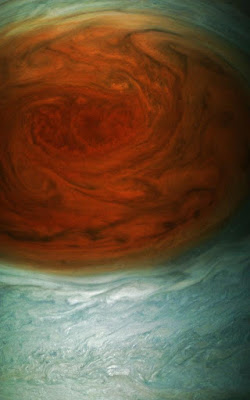 All of Juno's science instruments and the spacecraft's JunoCam were operating during the flyby, collecting data that are now being returned to Earth. Juno's next close flyby of Jupiter will occur on Sept. 1. Juno reached perijove (the point at which an orbit comes closest to Jupiter's center) on July 10 at 6:55 p.m. PDT (9:55 p.m. EDT).  At the time of perijove, Juno was about 2,200 miles (3,500 kilometers) above the planet's cloud tops.


Eleven minutes and 33 seconds later, Juno had covered another 24,713 miles (39,771 kilometers), and was passing directly above the coiling, crimson cloud tops of the Great Red Spot.
The spacecraft passed about 5,600 miles (9,000 kilometers) above the clouds of this iconic feature.
Juno launched on Aug. 5, 2011, from Cape Canaveral, Florida. During its mission of exploration, Juno soars low over the planet's cloud tops -- as close as about 2,100 miles (3,400 kilometers). During these flybys, Juno is probing beneath the obscuring cloud cover of Jupiter and studying its auroras to learn more about the planet's origins, structure, atmosphere and magnetosphere. 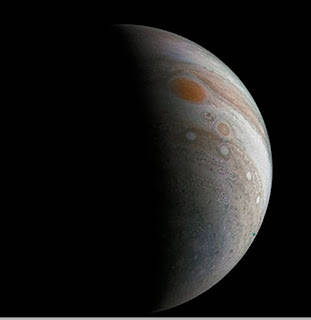 
Sigh.
Well, I was going to post my planned political-themed entry tonight, but it is already 1234AM as I write this and I'm quite tired after a long day to include work and the gym.
The bigger issue, though, is that I have the major editing project to do for work that I mentioned in my previous entry -- and that is likely going to spill over into my weekend if I am to have any prayer of finishing it by Monday.
Because of that, blogging is going to be difficult for the next 3 to 4 days -- and might even interrupt my usual Saturday schedule.
Anyway, I'm really tired and I'm not even going to try to post an entry tonight.
So apologies ahead of time if blogging is light for the next several days.
--Regulus
Posted by Regulus at 1:51 AM