We'll begin with a nice smooth jazz piece...
"The Traveler" by Earl Klugh from his album Life Stories (1986)
Earl Klugh is still actively performing and touring.
*******


Let's continue with the traveling theme ...
"Get Here" by Oleta Adams from her album Circle of One (1990)
This is a lovely song -- and I love the lyrics, too.
Get Here was composed, of course, by Brenda Russell and released on the album of same name in 1988. Ms. Adams released her version in 1990 -- and it became a major hit and one of her signature songs. 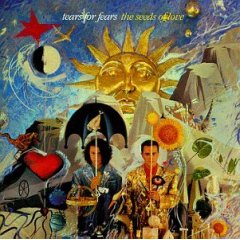 Interestingly, the story is that Ms. Adams was actually discovered in 1985 by the Tears for Fears duo of Roland Orzabal and Curt Smith in a hotel bar in Kansas City where she was performing as they were on a U.S. Ms. Adams's website states the same thing.


She actively collaborated with them including on their 1989 album The Seeds of Love (album cover image above).
******


And we'll end with something -- despite its Spanish name -- rather energetic and fast-paced ...
"Despacito" by Luis Fonsi ft. Daddy Yankee released as a single (2017)
"Despacito" means "Slowly" in Spanish and the song is considered to be in the genre of "reggaeton," which you can read about here. 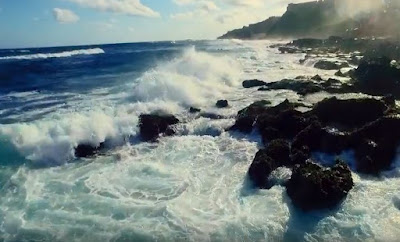 Opening screenshot from "Despacito" of the coastline near Old San Juan, Puerto Rico.
I really like the opening drone flyover along the rocky coastline of Puerto Rico, presumably in the La Perla shantytown of San Juan where the video was filmed (see image directly above). 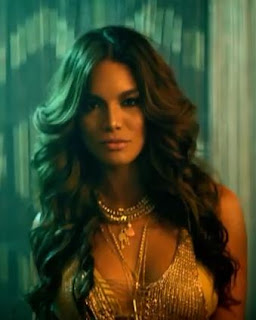 The fast-paced, colorful video features a local bar called La Factoría and the very pretty young woman featured throughout the video with the feathered hair is Puerto Rican native Zuleyka Rivera, who won the 2006 Miss Universe contest. She is pictured at left in a video screenshot -- making her grand entrance at La Factoría.


Of note, according to the Keeper of All Knowledge, this video hit 1 billion YouTube views in just 154 days, a new record, and as of yesterday was at 2.4 billion views -- making it the fifth-highest YouTube view (and highest Spanish language view). 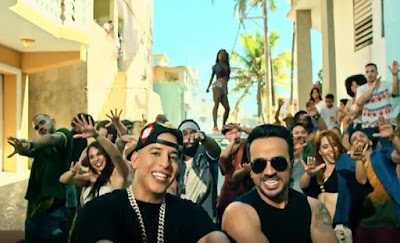 Luis Fonsi (left) and Daddy Yankee (right) reggae-rapping while a throng of young background dancers make appropriate gyrations and gestures.
Nice teeth, both of you.
Apparently, Justin "Leave It To" Bieber did a remix of this a few months ago but this video -- thankfully -- doesn't have him in it. That would just look stupid, anyway, given the setting.
*******


OK, that's all for now. Please see my previous entry for a brief update. As I wrote there, I will try to post a new entry tomorrow before heading out to Dallas for 2 days, but if I cannot do so, my next entry will then not be until Wednesday.
--Regulus