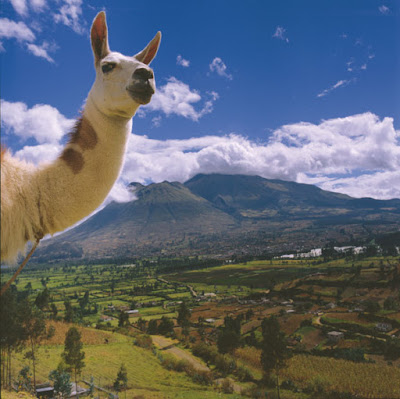 A llama in Ecuador with some lovely background scenery.
At least I think it's an actual picture and not photoshopped.
*******


I'm visiting my mom this weekend here in Glen Burnie, a.k.a., the Big Burn Out. I took the MARC train up earlier this evening to BWI Rail Station and we had dinner at Lee's Szechuan in Millersville.
You wouldn't think a Chinese restaurant in a non-descript suburban strip mall would have good food or a pleasant setting -- but it did. The place has a healthy menu that is actually, well, kinda healthy, to include sauce on the side and steamed vegetables, chicken, and/or shrimp. 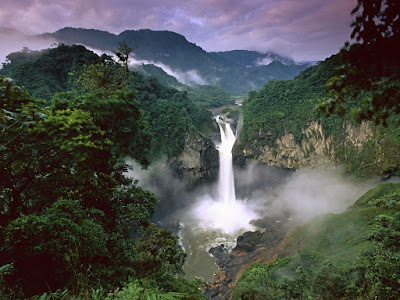 The San Rafael waterfall along the Quijos River outside Quito, Ecuador.
(To be clear, I think this is the San Rafael falls near Quito. There were numerous versions of this picture stating that it was in Yasuni National Park.)
*******


I've been watching TV tonight. I just watched a rather wonderful program on WHUT called "Ecuador: The Royal Tour." 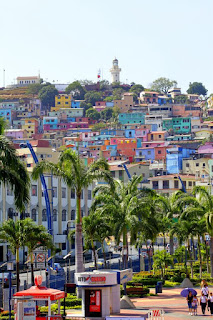 In it, CBS News Travel Editor Peter Greenberg is taken on a weeklong whirlwind tour of Ecuador by the then-President of Ecuador Rafael Correa to include the incredibly biodiverse Yasuni National Park in the Amazon rainforest, Quito's gold-laden La Iglesia de la Compañía de Jesús, Correa's hometown of Guayaquil, the seaside town of Puerto López, and the Galapagos Islands where we see, yes, a giant tortoise (the kind that live for centuries).

The full episode is available here. 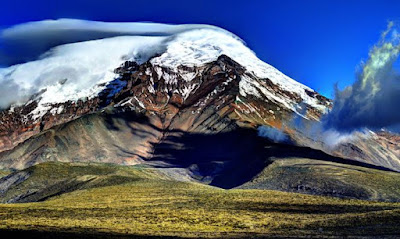 Mighty Cotopaxi.
No, not the tramp steamer SS Cotopaxi that went missing in Dec. 1925 en route from Charleston to Havana -- and that was "featured" in Close Encounters of the Third Kind.
******* 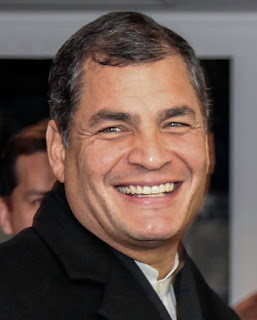 This show is part of a series of such "Royal Tour" documentaries in which Greenberg is taken on tours of countries by the heads of state, in this case, Rafael Correa (pictured left), who was the President of Ecuador from Jan. 2007 to this past May (and was succeeded by the former Vice President Lenín Moreno).


The show was the another installment in the series that has visits to Jordan, New Zealand, Israel, Mexico, and Peru. (I would link to Greenberg's personal website but Google states it might be hacked.) 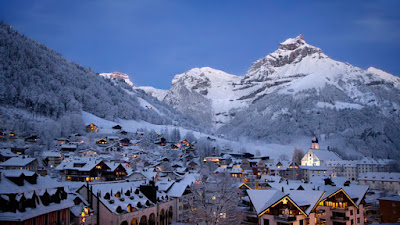 
Now there is a travel show (Real Rail TV) on about railway travel across Switzerland and it features some stunning Swiss natural scenery as well as visits to chocolate factories, monasteries, picturesque alpine villages, a St. Bernard dog training school, and rickety suspension bridge walkways high in the Alps. Engelberg seems an especially lovely town. 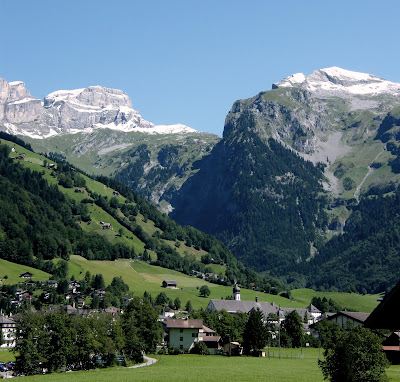 Summertime in and around Engelberg, Switzerland.
*******


Tomorrow, we're going to Mike's North restaurant in Pasadena near Fort Smallwood (and not to be confused with its older sister restaurant Mike’s Crab House in Rivera Beach). I'll head back to D.C. on Sunday. I also want to determine if it is possible to see the White Rocks formation at the mouth of the Patapsco River.
A few pictures from earlier today interspersed with some Charlie Pierce and Jonathan Chait political pieces on our ongoing Trumpocalypse ... 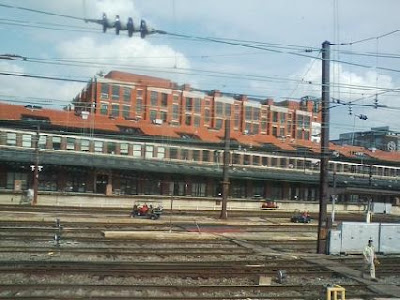 
Some good reads (links embedded)...
Trump's Warning to Mueller Proves, Again, That It's All About the Money by the great Charlie Pierce.
Excerpt (without embedded links):
It is about the money because it always has been about the money, and, because it always has been about the money, we suspect that the hounds now are baying loudly at the doors of the Kompromat Laundromat. This is how it could have happened: The Trump Organization, reportedly deeply in debt, needed money and couldn't get a loan from a U.S.-based bank. Meanwhile, the vicious Russian kleptocratic elite had a lot of dough it needed cleaned and was washing it through Deutsche Bank and through banks in Cyprus, an underrated spot for such enterprises. It was a profitable relationship for both parties: Both of the older Trump boys boasted in the past about how important Russian investment had been in maintaining the Trump Organization. Then Dad ran for president. Then he won. And then, by all indications, the bills came due... 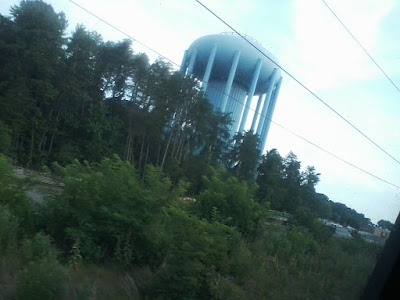 Water tower along the Amtrak / MARC train tracks, Odenton, Md., 4:44PM July 21, 2017.
As I've mentioned before at various times on this blog, there are many water towers -- most blue and looking like an ellipsoidal spaceship on elevated legs -- across the Metro Baltimore area. By contrast, the Metro D.C. area has relatively few water towers. I think this has to do with the fact that the D.C. area relies on the Potomac River for its water supply while the Baltimore area depends on a sort of archipelago -- so to speak -- of manmade reservoirs and so water storage is more of an issue.
I could be wrong, though.


His entire presidency has been an exercise in playing chicken with the other institutions of government, and, by and large, because they are controlled by his own party, which is composed now of the most conspicuous public cowards in the history of the Republic, he's won every time. Why wouldn't he try it again? The Post story was somebody's idea of a warning shot. That it was handled clumsily should surprise nobody. But it was a warning shot nonetheless. Don't go near the money because it always has been about the money. His whole life. His whole image of himself. His delusions of grandeur. It always has been about the money. 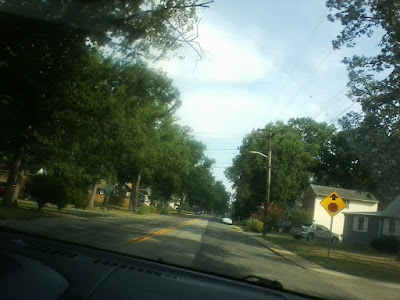 
Trump Is Mobilizing for War Against the Rule of Law by Jonathan Chait.
Excerpt:


The legal conflict between Donald Trump and Special Counsel Robert Mueller is escalating rapidly. New reports in the Washington Post and New York Times are clear signals that Trump is contemplating steps -- firing Mueller or issuing mass pardons -- that would seem to go beyond the pale.
Except: Trump's entire career is beyond the pale and, in his time on the political stage, the unthinkable has become thinkable with regularity.
Trump's actions are best understood in the context of the overwhelming likelihood he, his family members, and at least some of his associates are guilty of serious crimes. The investigation might not produce proof of criminal collusion with Russia’s illegal hacking of Democratic emails. (Though reasonable grounds for suspicion already exists in abundance.) ... 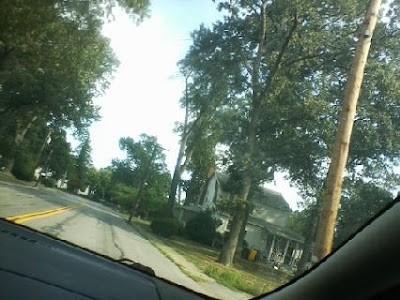 
Continued excerpt:
Trump has shown himself immune to widespread warnings that certain steps are simply not done. His hiding of tax returns, firing of U.S. Attorney Preet Bharara (who was investigating Russian financial crimes when he was let go), and ousting of FBI director James Comey were all steps that would seem to immolate his career. Ordering the Department of Justice to fire Mueller, or pardoning the targets of his investigations, would be an open announcement that Trump considers his financial ties to the Russian underworld and state to be beyond any legal accountability. The ominous threats emanating from the White House are that of an administration mobilizing for war against the rule of law. 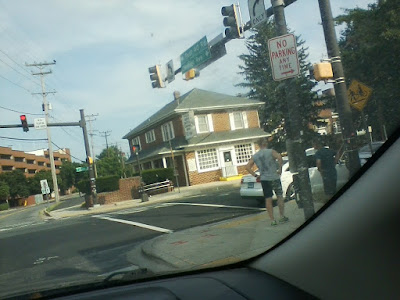 The intersection of Central Avenue, Post 40 Road, and Crain Highway, Glen Burnie, Md., 5:13PM July 21, 2017.
This intersection is actually the zero point (0.0) of Glen Burnie's quadrant-based grid system. Like D.C., it has NW, NE, SE, and SW "quadrants," but unlike D.C., the street numbering really doesn't adhere to it -- if anything, most Glen Burnie addresses are on the larger Baltimore numbering system.
However, along Crain Highway the numbers drop off to 1 at this intersection -- hence the address of that Glen Burnie Mutual Savings Bank (shown in the above picture) is 1 Crain Highway.
*******


Well, I think that's about all for now. Also, I might not have a Saturday Evening Post or Jukebox Saturday Night entries tomorrow.
--Regulus
Posted by Regulus at 11:55 PM