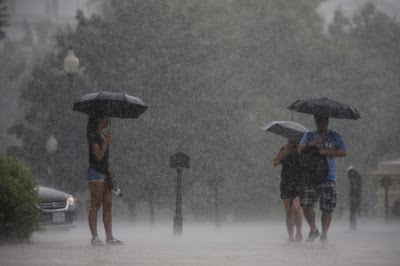 TOURISTS! In this case, tourists in a downpour near the U.S. Capitol Building, July 28, 2017; Photograph by Oliver Contreras for The Washington Post.
We love the tourists. They're so goddamn annoying. You need to be in a Zen-like state for them NOT to annoy you. And clueless. As for the Trumpizoidal Red Staters, well, ohhhhh, never mind ...
*******


Friday night. I'm here at the office on a very rainy night but getting ready to leave.
A highly anomalous weather pattern in the form of a storm system more akin to February or March than late July -- in terms of upper level low, surface low development strength and coastal baroclinicity, overall 500mb negative geopotential height anomalies, easterly fetch, and precipitation shield. 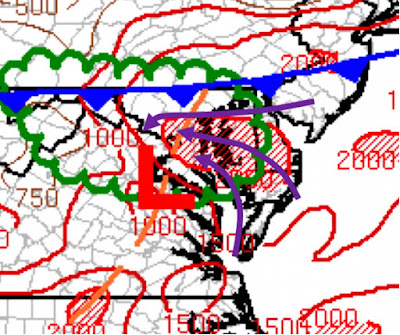 
Today has featured heavy rainfall across the Metro D.C. and Baltimore areas and multiple flash flood warnings. As I mentioned yesterday, the entire State of Maryland is presently under a flash flood watch -- something I've not seen before and quite noteworthy given that the state is located in four (4) different NWS forecast office CWAs and the weather from Garrett County to Somerset County is often highly variable even in a given synoptic situation. 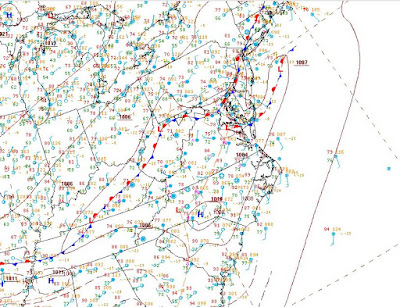 
Flash flood watch area remains in effect into Saturday afternoon. Coverage expected to increase tonight with the heaviest rainfall as the upper low moves across the forecast area and the surface low moves over the Delmarva. A storm total of 2-4+ inches is possible on average over the watch area. 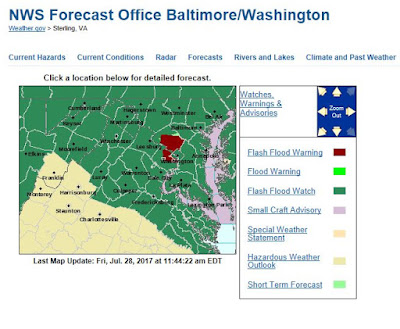 
Here is an excerpt from this evening's Sterling area forecast discussion (AFD). WOODY! wrote it (which I could tell without even reading the signature line based upon the first-person style in which it was written)
Although FFA extends to Greene County I remain most worried about northern VA up to the PA border - as I've seen in writings this does appear to bear some similarity to Nor`easters and makes me think of some of the bigger snowfalls I've seen here where the CHO area might get 8" and central MD/eastern WV 20-25." 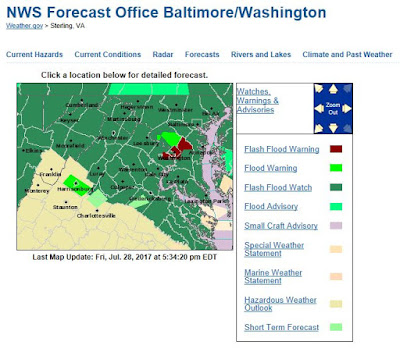 NWSFO Sterling (LWX) CWA advisories, updated as of 5:34PM EDT July 28, 2017.
There were two flash flood warnings for at least parts of the District of Columbia today -- and I received text alerts for both.
*******


12Z Euro shows rapid deepening of the low tonight as it moves over the Delmarva and strong northeastly flow pushes moisture into the northern part the forecast area. Given the rainfall that north DC/Montgomery Co. have already received with several inches more possible tonight this will bear close watching. 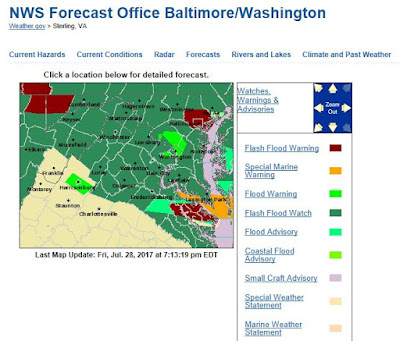 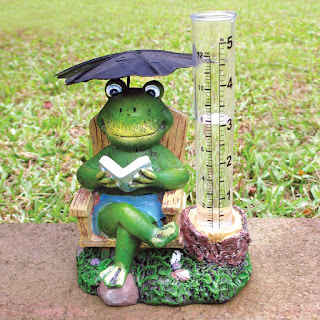 Rainfall totals today through 8PM have varied widely with KDCA again the jackpot winner. They are as follows:


The rainfall tonight and tomorrow could bring the region-wide storm total into the 3 to 5 inch range with localized amounts of 6 to 8 inches. 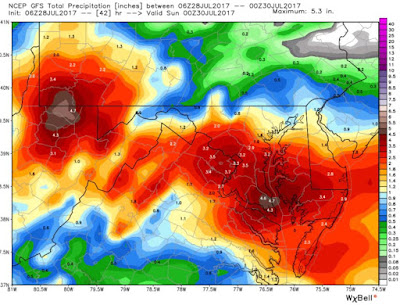 
The CWG has a number of entries on this weather event the past few days to include the following just today (July 28th):


Extreme rain and flash flooding are bearing down on the D.C. region (Updates)


PM Update: Torrential rain continues on and off through the evening, showers taper off on Saturday
How strange is this heavy summer rain event in D.C.? Very.
This entry by Wes Junker (the CWG's winter weather expert and a retired NWS meteorologist) and Angela Fritz makes the following assertions: 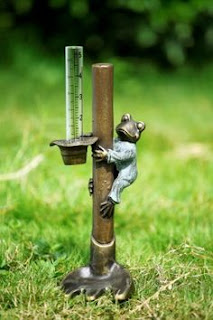 1. This storm is more like a winter (snow) storm than a summer one. It cites the example of the "Snowzilla" storm in Jan. 2016.


To buttress this, it claims that the mean 850-hPa (mb) zonal wind return interval (i.e., recurrence) for this event over the northern half of Maryland is outside of the observed 38-year interval back to 1979 -- and may in fact be on the order of once-every-100 years. (The 38 years refers to the period of the Climate Forecast System Reanalysis (CFSR) period and its current 1979 - 2009 climatology base period.) 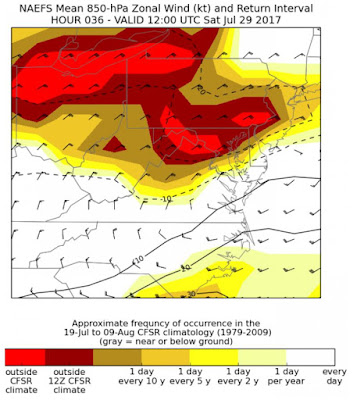 D.C.-area forecast: Heavy downpours arrive today, and flash flooding is likely
Keep in mind that CWG entry titles sometimes change -- in particular, those with multiple updates during significant weather events.
I'm just going to leave it at that for now. 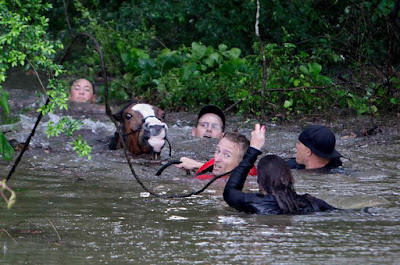 This is a dramatic photo from the remarkable rescue of dozens of horses stabled at the Cypress Creek horse park outside of Houston during a flood in April 2016.
*******


OK, that's all for now. I would have liked to post another installment of BIG Y'EYEMAH's Friday Night Creature Feature. 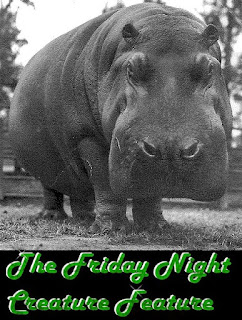 Indeed, I'm still quite keen to post that episode about BIG Y'EYEMAH achieving commercial spaceflight thanks to all the CORNED CHEESE, pork 'n 'beans, Big Macs, sauerkraut, bread-for-the-world she eats combined with a well-timed bout of constipation, and a posterior strategically-placed can of Sterno.


Watching her go all FULL FUNDAMENT PHASE in low Earth orbit with little bits of corned cheese shootin' and poopin' out the backside between here and Mar a Lago is something about which all children raised in the Space Age dream.
That's all for now. My plan is to post at least a Jukebox Saturday Night entry tomorrow and possibly a Saturday Evening Post as well.
--Regulus
Posted by Regulus at 8:27 PM