Eve of July 4th, 2017 Edition: Trump Truly Lost in Space, Fireworks in the Low-Rent District of Life, and a Return from a Long Time Ago

This picture says it all ... 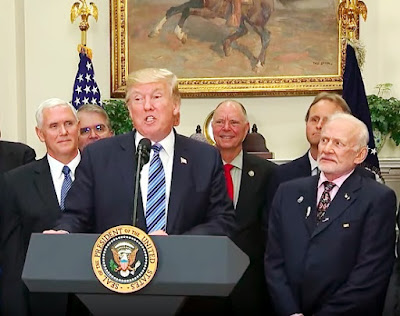 Apollo astronaut Buzz Aldrin's priceless facial expression last week at the White House while Trump attempted to ponder the importance of "space" and what it means to Americans.
Aldrin, the second human being on the Moon after Neil Armstrong in the Apollo 11 mission, was at the Trump White House, a.k.a., Camp Runamuck, on Friday as Trump signed some weird executive order that either involves restarting the National Space Council or crowning himself emperor. Story here.

No one is really sure, not even Trump, who for his part spent the weekend displaying his deepening psychological instability through tweets. This included one in which he doctors 2007 footage of himself body slamming a wrestler at WrestleMania -- itself bad enough -- to show an anthropomorphic "CNN" logo.

Here he is folks, the Orange Buffoon Emperor (OBE) himself, making America great again.
Phew. What a nut-job. Aren't you proud, Red Staters and white working class folks everywhere??
By the way, this Jonathan Chait piece is an important read (link embedded): Now We Have a Road Map to the Trump Campaign's Collusion With Russia. 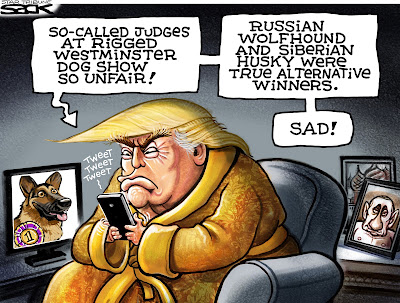 It's Monday evening and I was supposed to meet a coworker after work -- in lieu of going to the gym -- but she wasn't feeling well. As it is, I am meeting Brian and Greg (in town for the weekend from NYC). For tomorrow -- July 4th -- my plan is to go to the gym before it closes at 4PM, but realistically, this means getting there by 1PM.
If that doesn't come to pass, I'll just go Wednesday night. 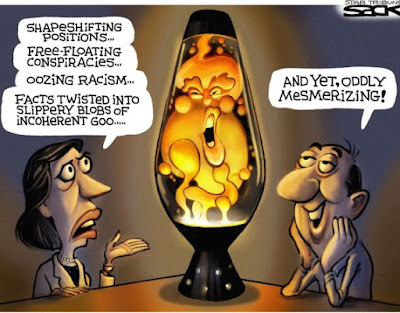 For tomorrow, I have no intention of viewing the fireworks on the National Mall in a vast and sweaty throng. Nor do I have any desire to be in any of the other parts of the city -- such as Columbia Heights and Petworth -- where jury-rigged contraptions of low-grade, dangerous fireworks are set off on every street corner and the air is thick with dense, acrid and sulfurous clouds. 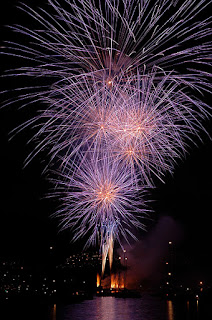 Fireworks, not to put too fine a point on it, are culturally trashy.

Now I don't mind the big, well-controlled public displays -- and to that end, I may view the Mall fireworks from Dupont Circle -- since you can actually see them looking south down 19th Street, which is on the same "longitude" as whence they are launched along the Reflecting Pool.


By the way, it is worth noting how many people with dogs or cats have to handle the trauma of their pets on July 4th due to the explosive sound of the fireworks. I personally know three -- two with dogs and one with cats. 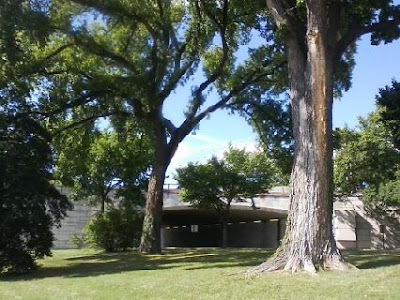 
By the way, I should mention that on Saturday night -- or rather, in the wee hours of Sunday morning -- as I was walking up 14th Street from Trade back home, I bumped into someone with whom I was friends many years ago (nearly 20, to be precise). Now I've seen him about the neighborhood over the past 5 years and even talked to him once, but this was the first time we chatted in any meaningful way.
I'm not really sure what to make of it, since we even had a subsequent email exchange. 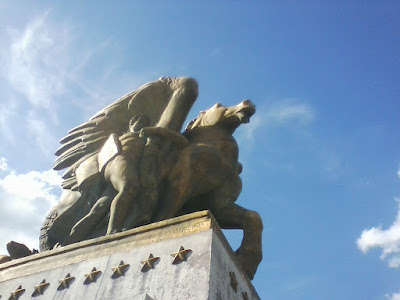 Aspiration and Literature, one of the two The Arts of Peace bronze, fire-gilded Neoclassical statues -- the other being Music and Harvest -- that frame the entrance to Rock Creek and Potomac Parkway, Washington, D.C., 5:00PM June 25, 2017.
Nearby are the bronze, fire-gilded Art Deco-style The Arts of War sculpture pair of Valor and Sacrifice on the D.C. side of the Arlington Memorial Bridge.
*******


OK, I think that's all for now. Oh, yes, my work travel to Dallas for the period Sunday - Tuesday of next week is on.
My next planned entry will be either tomorrow or late Wed/early Thursday.
--Regulus