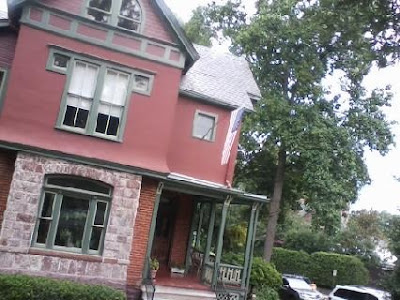 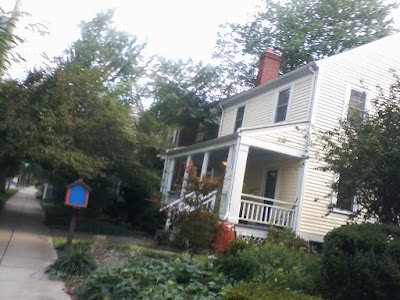 
Except for the rainy morning image (farther below), I took the D.C. pictures in this entry on my Tuesday, July 4th off-day walk from Friendship Heights Metro to Georgetown (where I caught a well-timed G2 bus and didn't have to walk the remaining 2 miles back to Dupont Circle / Logan Circle). My route took me through Spring Valley and Battery Kemble Park into Palisades. 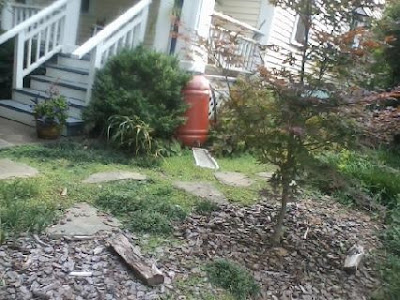 
Of note, I tried to have lunch at the Cheesecake Factory in Friendship Heights -- sitting again at the bar -- but this my sixth or so time there was the worst by far. It went from being a really enjoyable experience to basically ghetto to include crummy food (poorly cooked salmon, messy mashed potatoes, and microwaved vegetables that somehow has a combined 1,300 calories according to the menu) and lousy happy hour-discounted cheap wine.
Combine that with a bartender who was just useless as a server, utterly indifferent and repeatedly vanishing for minutes at a time, and I'm just not paying nearly $50 with tip for that sort of experience.
In the end, I cancelled the order and went to Chatter's -- the old Chadwick's and subsequently Chad's -- and had a much more pleasant lunch there before starting my evening walk. 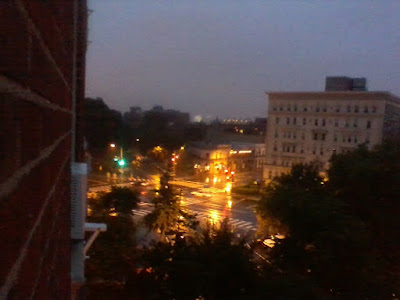 Rainy summer dawn apt view of the nearby intersection of 16th and U Streets and New Hampshire Ave NW, Washington, D.C., 5:36AM July 6, 2017.
(Part of Rosslyn's skyline is visible in the distance in this blurry image.)
See -- I actually can get up very early. The problem is I go back to sleep (love that morning lucid dreaming!) and then my entire day is offset a several hours from the rest of the world to include work and gym and everything else.
*******


It is a warm and thickly humid evening following bouts of heavy rainfall across the Metro D.C. and Baltimore areas the past 24 to 36 hours including here in Washington, D.C. The air is purely maritime tropical (mT), and it feels tropical rainforest-like. 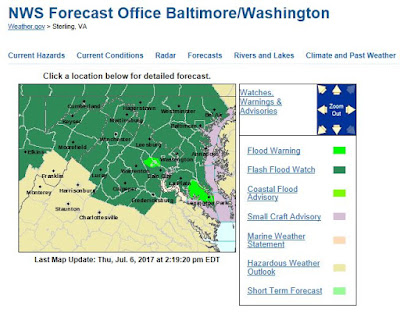 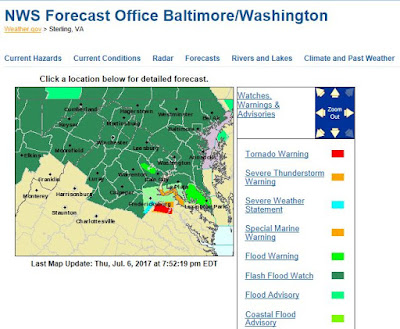 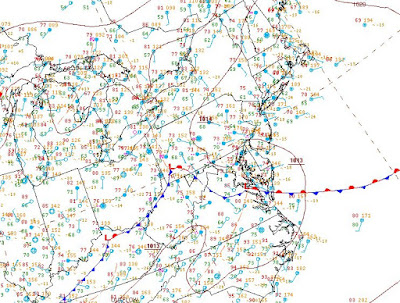 
A flash flood watch is in effect across much of the region to include all of Maryland and Delaware and northern and central Virginia. A quasi-stationary frontal boundary is draped across the region with waves of low pressure riding along it (see weather map image directly above). 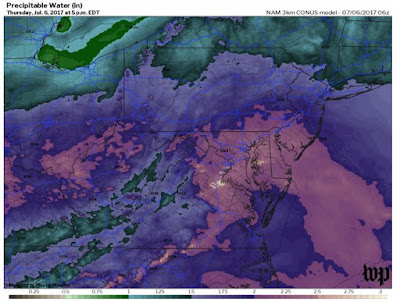 Precipitable water (PWAT) values (in inches) for the Mid-Atlantic region from the 6Z 7/6/2017 3-km NAM valid at 5PM EDT July 6, 2017.
These are about as high as the PWAT values ever get around here any time of the year. This map and the Doppler radar-estimated rainfall image below came from this CWG entry.
*******


The boundary is providing a focus for rainfall in an atmosphere with exceptionally high precipitable water (PWAT) values -- in the 2 to 2.5 inch range (see image directly above) -- and where thunderstorms have formed, there have been monsoon-like rainfall totals in short periods. 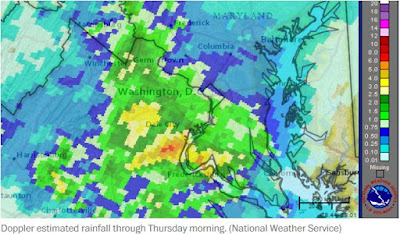 
The Patuxent River Naval Air Station (KNHK) received 1.05" in 23 minutes this morning. Rainfall totals in parts of St. Mary's County reached 4.5 inches. The rainfall gauge image below (with the hot pink painted wood) is taken from the same CWG-linked entry above, and it is of someone's backyard gauge in California (St. Mary's County), Md.
Some radar imagery ...


Today was actually for an extended period an overcast and showery day -- making it unusual for the time of year. 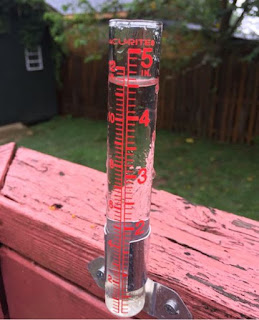 Rainfall totals for today through 5PM and for all day yesterday (July 5th):


As you can see, the Wednesday rain was focused over the D.C. area and points southwest. Today's rainfall was more widespread, although most of the rainfall here in the District and KDCA was in the overnight hours.
Additional radar imagery ...


This rainfall has helped significantly alleviate what looked like a return to drought conditions following an abnormally dry June, which in turn had followed a wet April and May that had made up for a nearly year-long below normal precipitation period.
A cold frontal boundary is forecasted to cross the East Coast late tomorrow into Saturday and usher in much drier air.


As a brief update, I had a good gym workout last night after work. Concerning work (my job), I am going to Dallas on Sunday for a Monday/Tuesday day-and-a-half work conference. I'm supposed to be back on Tuesday night.
Dallas, Texas in July. Wonderful. I just need to make sure I don't use the wrong bathroom. (Yes, the strangle-holding state GOP there is on a lunatic fundamentalist kick about that.) 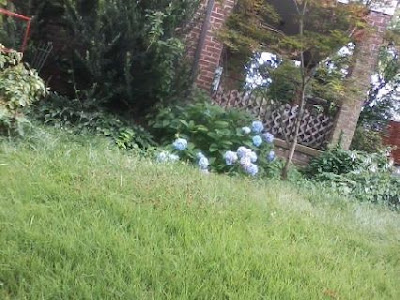 
This will be the first time I've been in Texas -- except for a brief airplane transfer at Dallas/Ft. Worth Int'l Airport (DFW) at some unspecified point at least 20 years ago -- since when I lived there as a child for part of 1980 and 1981 with my mom and late stepfather. I'm scheduled to be back on Tuesday night. 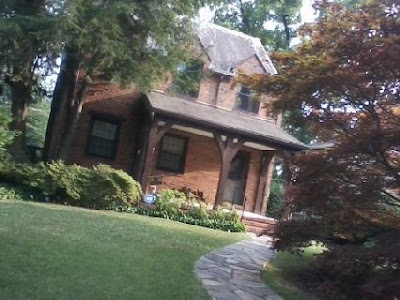 Another house in the Friendship Heights section of Washington, D.C., 6:30PM July 4, 2017.
It is possible I was already south of River Road at this point, in which case this is the American University Park neighborhood (not quite to Spring Valley).
*******


Of note, thanks to my supervisor -- who is also going to Dallas with me -- and Expedia, I was able to find relatively inexpensive and direct, non-stop flights between D.C. and Dallas. I had tried to use Southwest but could only find a roundtrip for just over $1,000 and United was too high at $600 (remember that we have to justify to and bill the federal client for these trips).
The United one also involved changing in O'Hare (back to Chicago!) and 8 hours of total travel time including nearly 3 hour layover. I would have had to leave around noon on Sunday -- meaning getting up by 830AM. 
Instead, I was able to get a flight from National (DCA) to DFW -- direct and nonstop -- that leaves around 630PM. Returning, I'm going from Dallas Love Field to DCA on Tuesday evening on another air carrier and scheduled to get in around 1030PM. If it is too late, I'll take a taxi back into the city.
Now to be clear, I don't have seat assignments (you're supposed to contact the airlines directly) so it is possible I don't even have a seat on either flight ... 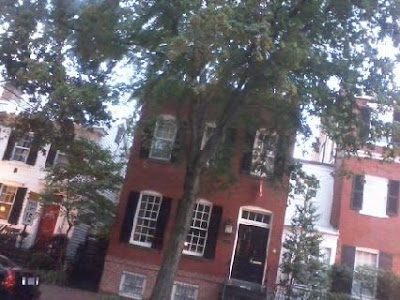 
Before ending this entry, I'd like to mention my planned upcoming blogging schedule for the next week. In short, it is going to be a bit light until at least very late Tuesday or Wednesday. In addition, I have a fairly major editing project to complete by next Friday (not related to the Dallas workshop), so I might have to limit blogging further next week as well. 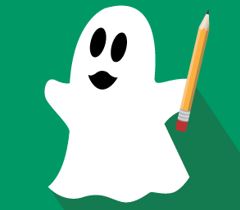 That being the case, I probably will not post a BIG Y'EYEMAH's Friday Night Creature Feature tomorrow, but I will make every effort to post a Saturday Evening Entry and Jukebox Saturday Night edition this weekend.


Time-permitting, I will also try to post on Sunday before leaving an entry about my long-ago time in Texas.
OK, that's all for now.
--Regulus
Posted by Regulus at 9:31 PM