A Dallas Reunion and (Hotel) Room With a View 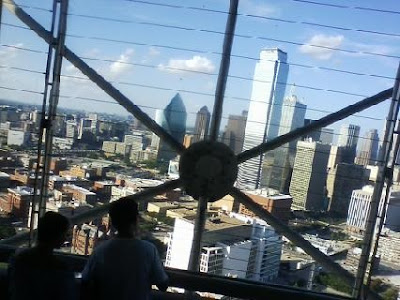 
Well, my brief trip to Dallas, Texas is just about over and I'm getting ready to head to the airport for my scheduled evening flight back home to D.C.
I was able to get a late checkout and right now, I'm seated in my quiet, air-conditioned hotel room on the 14th floor of the Hilton Dallas Lincoln Centre looking at one of the ubiquitous massive, busy freeways and spaghetti-maze of on and off ramps that crisscross the Dallas/Fort Worth Metroplex, watching the never-ending whirl of traffic. The endless white noise whoosh of traffic (with occasional louder roar, revving engine, or siren) is just audible through the double-paned, tinted windows.
This is a powerfully private-vehicle-centric culture and it is exceedingly difficult to get anywhere without one. That is obvious but it also needs to be stated at times. 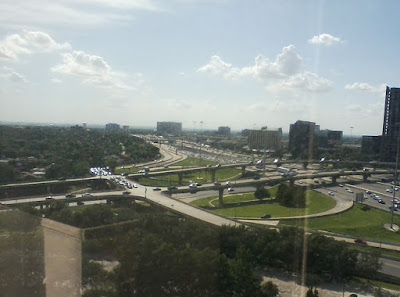 
It's a typically hot day in July here -- about 95F -- and the dull, bright blue sky has some elevated cumulus / towering cumulus clouds but no real sign of thunderstorm development.
The workshop ended just before noon and I was able to get lunch and go for a quick swim in the hotel's somewhat unusually-designed outdoor pool (it looks more like a strange, extended fountain than a swimming pool) locked behind gates and locked doors that require a hotel key card.
I'm flying out of Dallas Love Field rather than the far more massive and daunting Dallas / Fort Worth Int'l Airport, and I need to take a taxi to the airport. (I get to expense that, though, and ditto a taxi once I'm home.) It is a direct, non-stop flight to National Airport, so if there are no delays, I should be back home in D.C. in my apartment by about 1130PM Eastern Time. (It is about 315PM Central Time as I write this.) 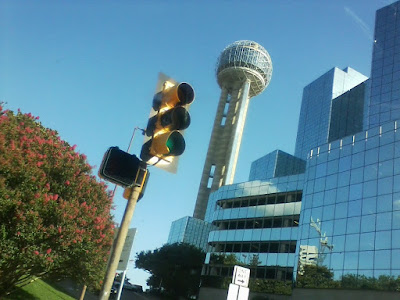 
So yesterday evening, after the workshop had concluded for the day, I took a taxi -- or rather, a Lyft even though I don't have a Smartphone with necessary app -- into downtown Dallas. (My Lyft driver, who had been parked in the hotel driveway, was a very nice native Jordanian man named Abu, and I'll write more about him in a subsequent entry.)
I got off at Reunion Tower and went up to what is called the GeO-Deck observation deck and also two flights of stairs higher to the Cloud Nine Café, itself below the Wolfgang Puck restaurant. (I'm unsure if the old Antares restaurant where I had my previous last dinner in Texas on my 12th birthday with my mom and Ray -- on Nov. 26, 1981 -- was where the Cloud Nine Café or the Wolfgang Puck restaurant is.) 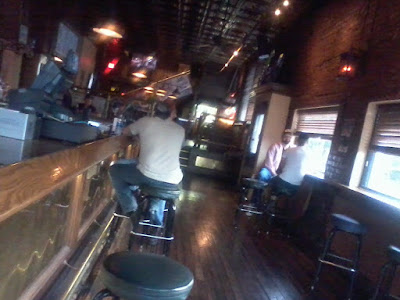 
I then walked all the way to JRs Dallas on a somewhat convoluted route to include the Katy Trail -- in a city I know nothing about, although I had studied a Google map just enough to have a sense of where I wanted to be -- by about 815PM. I had a couple drinks there and then took a cab -- which the bartender kindly called for me -- back to the hotel.
I had another wonderful cab driver -- this one a native Ethiopian fellow named Daniel -- and I'll write about him in that subsequent entry as well.
Once back the hotel, I went to the lobby hotel bar, where I had dinner and some additional interesting conversations with interesting characters in what, upon reflection, feels like a Middle American version of The Canterbury Tales.
I got to bed by about 1230AM -- having spent a shit-ton of money but having had a wonderful day. And I still got up in time for the 830AM start of the workshop.
OK, that's all for now. I am heading out. Owing to my work schedule and need to finish something urgent, blogging may be light the next several days.
Oh, yes, I have a window seat on the flight back -- at least I think I do -- and hopefully there will be no screaming two year old.
--Regulus