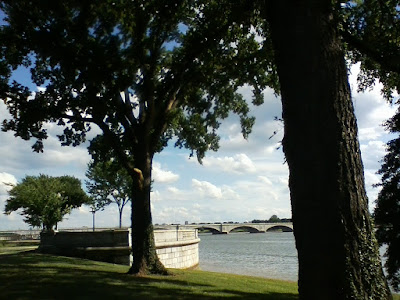 
So this is a political-themed entry tonight because -- to quote the inestimable Charlie Pierce -- of the billowing clouds of smoke coming from Camp Runamuck, a.k.a., the Trump White House, is a sight to behold. 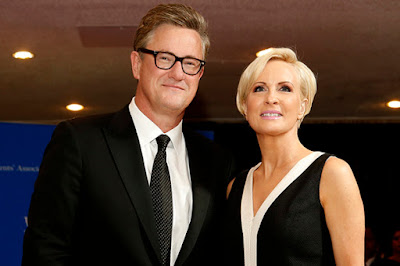 Of the many Trumpster dumpster fires burning, the latest conflagration involves Trump's noxious and deranged tweets Thursday morning against Morning Joe cohosts (and erstwhile Trump friends) Joe Scarborough and Mika Brzezinski (pictured above). (The two are now engaged.) As background, the relationship between the co-host couple and Trump has soured bigly in recent months as they've begun questioning everything about him including his mental health. 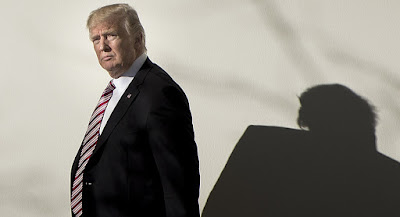 It was Trump's usual deep and hateful misogyny that erupted -- and as CNN pundit Ana Navarro noted -- in the context of his bizarre fixation on women and blood, hence the tweeted remarks about "low IQ crazy Mika" Brzezinski and how on New Years Eve she was "bleeding badly from a face-lift." 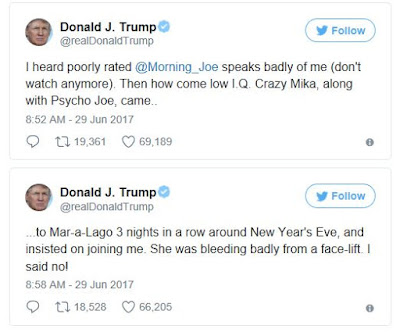 Above are images of the two tweets that our mentally unbalanced President sent out -- and the response across the media-scape (with the exception of the Fox News propaganda organ and rightwing hate radio/internet garbage) was revulsion and condemnation. 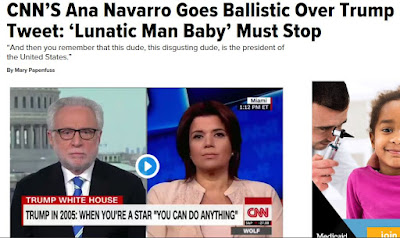 For her part, the awesome Ms. Navarro said the following to dough-faced Wolf Blitzer:
"I was frankly disgusted ... This dude has got such a fixation with women and blood. What is wrong with him? And then you remember that this dude, this disgusting dude, is the president of the United States. ... He's acting for all of us ... and he is embarrassing. He is shameful."
She went on to say: "It's time that somebody ... calls him up and says, 'Listen, you crazy, lunatic 70-year-old man-baby, stop it. You are now the president of the United States, the commander in chief, and you need to stop acting like a mean girl, because we just won't take it.'"
Source here.
Trump also just lied when he wrote that this -- since it basically states that neither Scarborough nor Brzezinski were in attendance with Trump at the Mar-a-Lago New Years Eve bash when there is every bit of photographic proof that they were: 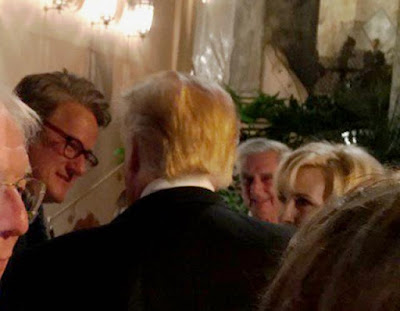 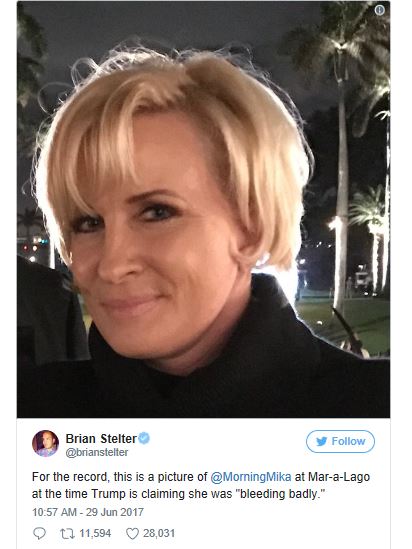 A picture of Mika Brzezinski at Mar-a-Lago on New Years Eve 2017 -- as sent out in a tweet by CNN's Brian Stelter yesterday -- showing that she was most definitely not "bleeding" from a face-lift for any other reason.
*******


Of course, Trump and the truth have almost no overlap. Earlier this week, the New York Times had a full page print edition list of all Trump's lies -- available here online as well. 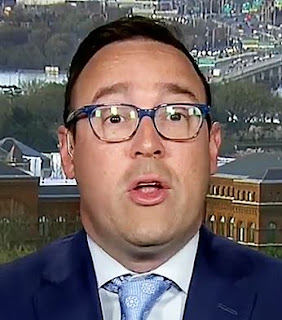 Well, all except for idiot Chris Cillizza, who tried to sound like some jaded, worldly sophisticate by yammering on about how "this is who Trump is and he won't change" -- as if that is some sort of resolution to the moral and ethical depravity of that man who occupies an office to which he should have never ascended.


Oh, and Melania Trump's reply through her mouthpiece was equally offensive with its thuggish "When attacked, Trump will hit back ten times as hard" mindset. This shows mental instability and abusiveness -- and it also shows Ms. "Stop Cyberbullying" to be full of shit.
That's some abusive marriage she's in. 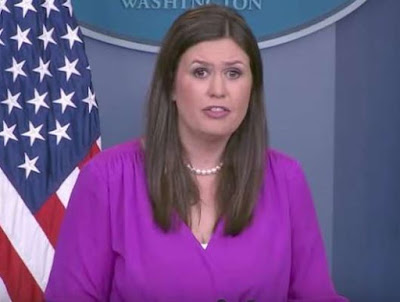 As for the useless Sarah Huckabee Sanders (pictured above the other day), to cite what Charlie Pierce recently wrote, had Trump not won, she "would be would be on the 700 Club, hawking Jesus by the pound." 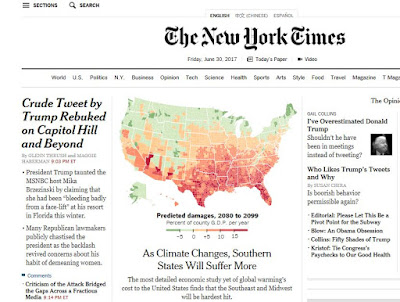 
The Trump tweets caused an earthquake in the American media and political worlds -- representing a sort of breaking point (or at least it seemed so in the heat of the moment). They also instantly appalled literally tens of millions of Americans who pay attention to these things. Here is the main New York Times article about it -- it has at present over 5,200 comments associated with it.
The Washington Post news, analysis, and opinion pieces on it similarly have thousands of comments per piece.


I have to note in this entry the Washington Post op-ed headlined "Donald Trump is not well" that Joe Scarborough and Mika Brzezinski wrote today. 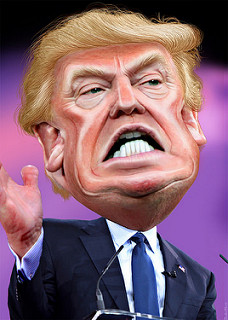 The piece details on the Mar-a-Lago New Years Eve event and the revelation that "top White House staff members warned that the National Enquirer was planning to publish a negative article" about the co-host couple unless they "begged the president to have the story spiked."

They wrote: "We ignored their desperate pleas."


Of the 5,500+ comments associated with it as of this update, the top one by poster "Mark Sparkman" is worth reposting here: 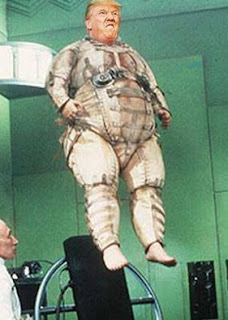 Trump defines himself through his criticisms. It's called psychological projection and he is the poster child for a Psych 101 course on this disorder. Just look at his most recent critical language, "low IQ", "showboat", "grand-stander" -- sound like someone we know? In the past he has called people "losers", "incompetents" -- this from the guy who has been married 3 times and bankrupted 4 or 5 times. "Fake news" from the man who pushed the Obama birther lie and the bogus wire tapping claim. If you want to know the real Donald Trump just look at his endless criticisms, he tells us exactly who he is.

Oh, and the Washington Post editorial board had this unsigned editorial (link embedded): Trump clearly won't change. Here's what the rest of us can do.
I never thought I'd be in a reality where I found common cause with Fred Hiatt & Co. Funny that.
End of Update.


Trump's unhinged outburst -- calling to mind the blood comments he made about former Fox News personality Megyn Kelly -- was all too much for many Senate Republicans, some of whom had surprisingly harsh denunciations of Trump, including South Carolina Sen. Lindsey Graham (R - Gay) and Nebraska Sen. Ben Sasse (R-Cornhusk Hole). 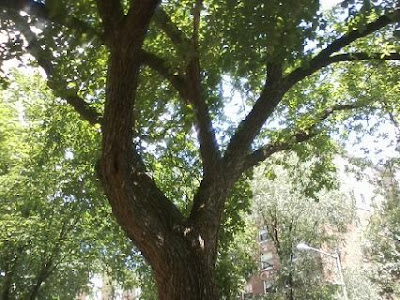 A leafy elm tree in the 2000 block New Hampshire Ave NW, Washington, D.C., 1:42PM June 25, 2017.
This tree is across the street from my apartment building and I see it from my window. It's actually about 7 stories tall -- higher than my 5th floor apartment. This means it is taller than the tallest dinosaur that ever lived (Sauroposeidon)-- but not longer in length than the blue whale.
*******


For their part, Senate Republicans are in a deserved and hopefully intractable mess over their Obamacare "repeal and replace" effort that is little more than a trillion dollar tax giveaway to the superrich at the expense of Medicaid recipients and that pits the far libertarian right Teabagger types against the moderates (i.e., garden variety right-leaning Senators) worried about how such a savage reverse class warfare will weigh on their electoral chances once the human devastation starts piling up as a result of the passage of the bill. 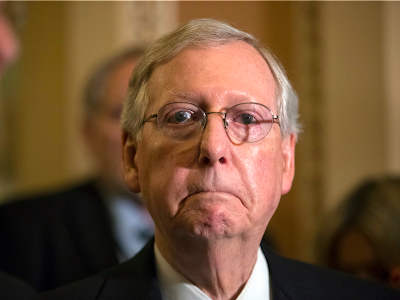 Leading this effort is Senate Majority Leader Mitch McConnell, who is an amoral tool of oligarchy and plutocracy -- and who bears a striking resemblance to a tortoise. But at least he doesn't tweet hateful bullshit. 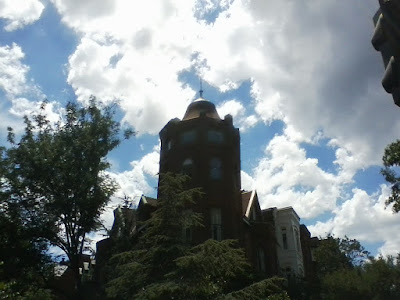 1272 New Hampshire Ave NW, Washington, D.C., 2:14PM June 25, 2017.
*******
Regarding that "Better Care Reconciliation Act" -- still as much of a bloody abortion of a "health bill" as the House Republican "AHCA" version -- there have been some great pieces on the whole process and ongoing sudden / unexpected developments from my usual trio of must-read political writers to include Jonathan Chait, Josh Barro, and Charlie Pierce, each in his own effective style. 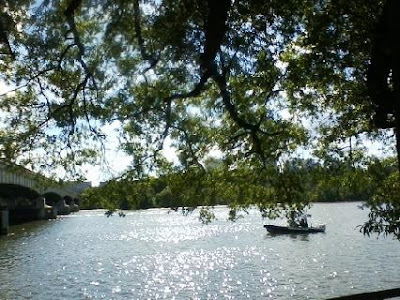 
I would like to post more but it is already ridiculously late -- nearly 4AM. However, before signing off, I would like to note that I did something I haven't done in a long, long while (as in, 2 years 3 months), namely, I updated my long-lost-from-any-purpose Arcturus's World blog.
Several of the images in this entry are also in the new entry I posted over there. That being the case, I'm going to sign off now. I'll try to post a BIG Y'EYEMAH's Friday Night Creature Feature edition later today. 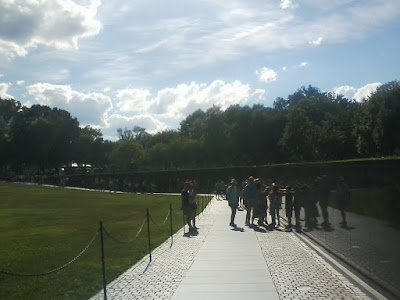 Vietnam Veterans Memorial, Washington, D.C., 5:10PM June 25, 2017.
It's far better to see it on a cold, still winter night when there are few tourists around and instead the memorial is bathed in subdued lighting.
*******

OK, goodnight, or rather, good morning.