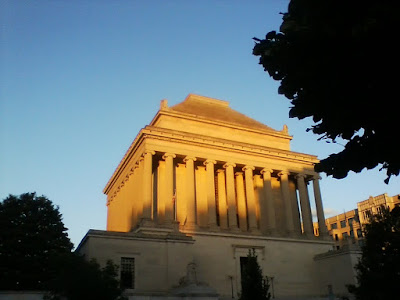 
I just finished three loads of laundry and I'm making a bit of dinner -- although I might still go to Old Ebbitt Grill later tonight. Earlier today, I went to the gym and had a good multi-part workout ending with a swim.

This weekend is Capital Pride here in D.C. -- this being the 42nd year since the event started a long time ago in a very different cultural and economic context back in 1975 (when it was just a one-day, small "Gay Pride Day").


It is an annual event with which I as a middle-aged gay man and longtime D.C. resident have a decidedly mixed relationship, but I'm not going to get into that now. 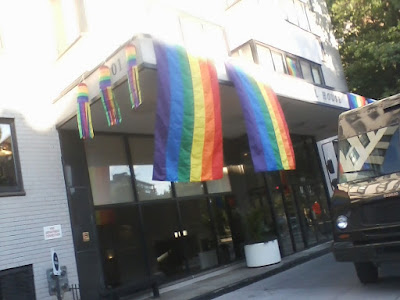 Two rainbow flags and other gay pride decorations festoon the exterior of the Imperial House by Dupont Circle, Washington, D.C., 7:05PM June 9, 2017.
What a dumb name for a building.
*******


I will say that I've never seen so many rainbow flags as I've seen this year -- literally every other business establishment has the LGBTQ rainbow flag hanging in a window (and in the case of the YMCA, it is the U.S. flag with rainbow strips).
A few words about the rainbow flag ... 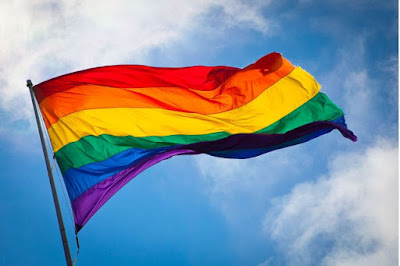 The LGBTQ rainbow flag in all its colorific glory.
*******


Earlier this month on June 2nd, Google had a Google Doodle in honor of the birthday of the late Gilbert Baker, the artist and gay rights activist who designed a precursor to what would become the LGBTQ movement rainbow flag. To be clear, though, various iterations of the rainbow flag long predates its usage in the LGBTQ movement. 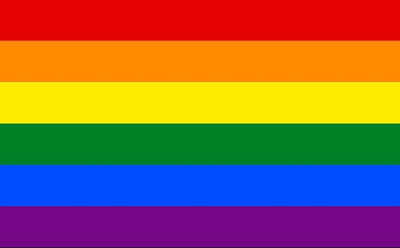 The most popular currently used version of the LGBTQ rainbow flag.
******* 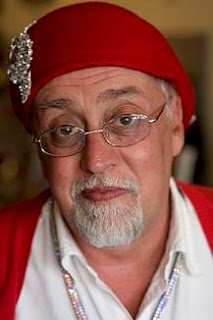 Baker -- who passed away on March 31st of this year at the age of 65 -- originally designed a flag in 1978 for use in the San Francisco Gay Freedom Day parade in June of that year and he did so with eight colors, not the current six. According to this Wikipedia article, the eight colors each had a specific meaning to include sex, life, healing, sunlight, nature, magic/art, serenity, and spirit as follows: 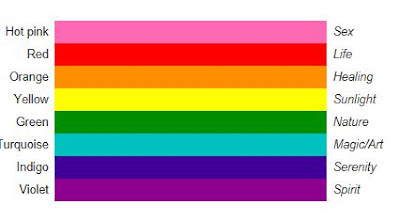 The original design had eight colors but for various reasons, the hot pink and turquoise colors were dropped and the flag assumed its current six-color configuration (with turquoise and indigo changed to royal blue). 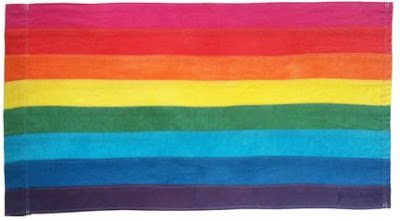 An image of what is claimed to be the original flag that Baker designed with the eight (rather than six) colors.
*******


In any event, so far, I've participated in precisely zero Capital Pride events including viewing the parade earlier this evening. I was at the gym and, fortunately, my path to and from the YMCA Anthony Bowen doesn't take me across the parade route -- unlike when I used to go to the old National Capital YMCA.
From what I saw, it looks as though the parade route was mobbed. It is still a very popular event. 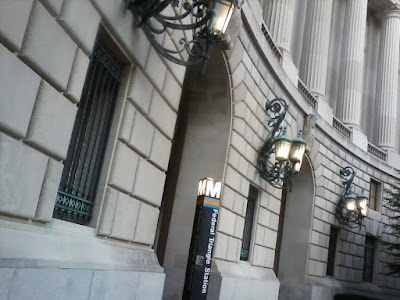 Federal Triangle, Washington, D.C., 8:12PM June 8, 2017.
I got off the Metro at Federal Triangle on Thursday after work in order to stop at Bobby Van's on 15th Street.
The structure here is the William Jefferson Clinton Building -- formerly the Ariel Rios Building -- that houses EPA headquarters. The EPA is threatened with annihilation in the current Trump / GOP Push for Oligarchical, Kleptocratic, Planetary Despoliation Dystopia.
*******


For tomorrow, I'm supposed to meet my mom for lunch. She is taking a Sunday MARC train to Union Station. I had wanted to go to a restaurant elsewhere in D.C. -- perhaps Circa DC at Foggy Bottom, where I sometimes go on Sundays -- but the weather is supposed to be so goddamn hot (forecasted high 95F) that it sort of nixes that idea. 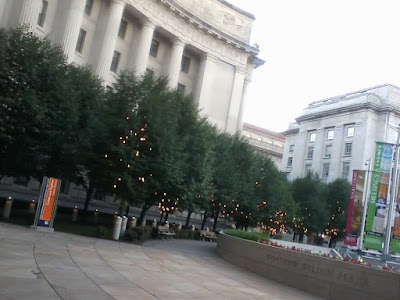 
Actually, I'm surprised she still wants to do anything since she tends to stay home on really hot days. The humidity isn't supposed to be too high -- dew points around 65F -- but for me, hot and "dry" with blazing sunshine is just as shitty as hot and humid. Indeed, it is even worse when there is a hot, dry foehn-like westerly wind. The next chance of rain -- in the form of thunderstorms -- isn't until Wednesday.
Because of the heat and sunshine, I probably will not go down to the Capital Pride street festival on Pennsylvania Avenue. I just can't stand being outside on hot pavement. 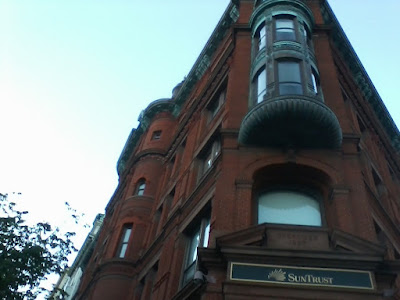 
Yesterday after work, I went to Annie's to meet Fred. We were upstairs and the place was mobbed -- everything in the "gayborhood" to include the 17th Street gay mafia's territory between P and R Streets and in the P and 14th Street area near Logan Circle are mobbed this weekend because of Capital Pride.
As if D.C.'s gay population -- or, for that matter, its straight Millennial population -- needed any excuse to drink excessively and be on Grindr or, for the straights, Tinder. 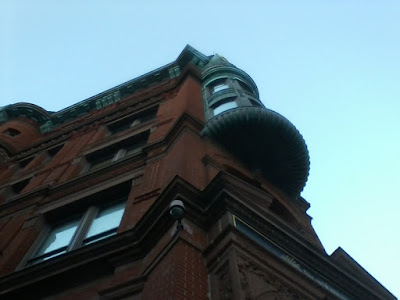 Another view of the National Savings and Trust Company Building, Washington, D.C., 8:24PM June 8, 2017.
I want to call that structure a parapet but it apparently is not.
*******


While at Annie's, I met a guy named Ron who is from Chicago but who lives in Portland, Oregon. He used to live here in D.C. and was sort of high up at the VA at its Vermont Avenue headquarters. Ron is 69 years old -- but he looks / is in the shape exactly how I want to be at that age in 22 years (assuming I'm still alive).
A bit taller than I am (not that that requires much height), Ron is fit, trim, and in excellent health. You would guess his age somewhere around 54, not 69. 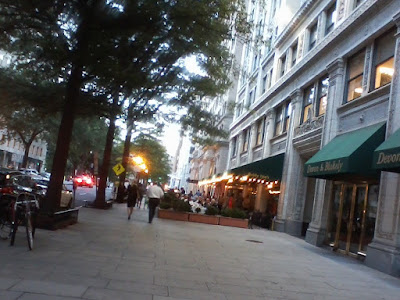 
Ron and I parted from Fred and walked to No. 9, but the line to get in was very long. We also tried Trade, but it too had a lengthy line. Our third try -- the Green Lantern (a.k.a., the Green Latrine) -- was also a bust in that there was a lengthy line to gain entrance.
I suggested that we go to the netherworld that is Stan's. 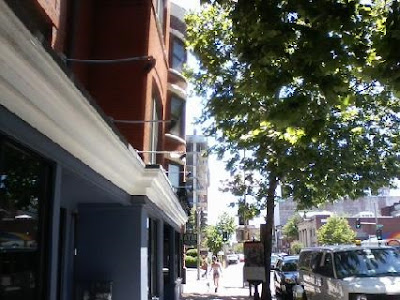 
Stan's is a subterranean bar / restaurant at the corner of Vermont Ave and L Street NW. You go down a steep flight of stone steps into what amounts to a large hole in the ground and enter through glass doors this subterranean world with its mirrors on the wall and 1985 décor. There is a bar at what is ostensibly the front with a sort of strange layout due to the glass doors.
The clientele is almost entirely African American -- the offspring of a certain Old School 1980s D.C. when Marion Barry reigned supreme. 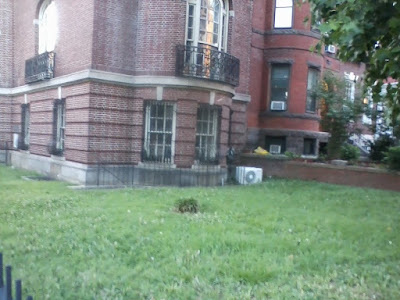 The yard at the corner of R and 16th Streets NW, Washington, D.C., 8:12PM June 9, 2017.
Yes, I realize this is a blurry picture. I was trying to take a picture of that shrub growing in the yard. It has been there -- looking basically identical except for the occasional lawn-mowed haircut (leaf-cut) it gets -- since at least 2005 (I can vouch for that) and probably many years before that.
That shrub could be literally 30 years old.
*******


I've actually gone to Stan's on occasions when I've just not been let in, and I've also gone there when there was a seat at the bar but a large black man made it clear I wasn't to sit there -- until he suddenly relented, but on the proviso that the woman whom he was expecting would get the seat as soon as she showed up. (To be clear, he wasn't expecting a particular individual but rather any woman that he found attractive.)
Ron and I had one drink each there -- but just so you know, the vodka drinks come in water glass sized portions and the soda or other mixer you get is in a small flask. You only have one drink at Stan's -- two would black you out. 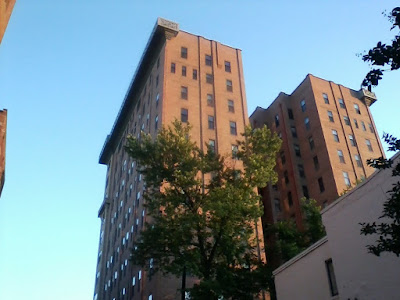 The north-facing façade of the Cairo as seen from R Street NW, Washington, D.C., 8:14PM June 9, 2017.
The Cairo is the proximate reason that the District of Columbia has a height restriction on its buildings. It began as a local fire safety ordinance but later was codified in federal law.
*******


Later, we went to Stoney's (upstairs), and although Howie was working, Gasy the Hangry Chipmungorilla was there with his new best friend and we left, at which point I went home, although things are a bit fuzzy. I have Ron's number and we may meet up tomorrow. (As for new best friend, Gary is his problem now.
OK, that's all for now. A Jukebox Saturday Night edition to follow momentarily (as I already composed the entry). My next planned entry will be late Monday or early Tuesday.
--Regulus
Posted by Regulus at 11:06 PM