Let's start out with something old school jazz ...
"Exodus" by Eddie Harris and his quintet on his Exodus to Jazz album (1961)
This is the kind of music I love to hear played live late at night -- such as at the very nearby restaurant JoJo Restaurant and Bar (where there is live jazz almost nightly).
There is a slightly (and unintentionally) topical connection to this in that Eddie Harris wrote music for The Bill Cosby Show (not to be confused with The Cosby Show or Cosby).
*******


Next up, a visit to the New Age Dreamtime side ...
"Corroboree" by Mars Lasar from his album The Eleventh Hour (1993)
The term "corroboree," of course, has a very special meaning to the Aborigines -- and this New Age instrumental incorporates Aboriginal themes and sounds to include, necessarily, some didgeridoo action.
Here is Mars Lasar's website and it includes his bio.
*******


We'll conclude with a curious and wonderfully upbeat song by a group that I've been terribly remiss in not previously featuring in my Jukebox Saturday Night series ...
"Soul Food to Go" by The Manhattan Transfer from the group's album Brasil (1987)
This is the music video that accompanied the release of this song 30 years ago. The quality of the video is a bit grainy / blurry, but it features miniature clay animation versions of the quartet.
The Manhattan Transfer was founded in 1969 and -- as the Wikipedia article notes -- "has explored a capella, vocalese, swing, standards, Brazilian jazz, rhythm and blues, and pop music" in the intervening decades. 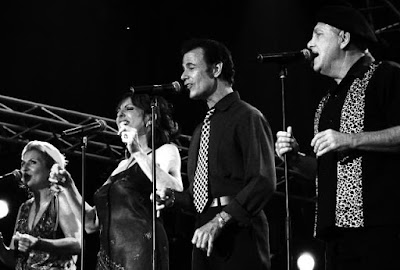 The Manhattan Transfer quartet in 2008; Left to right: Janis Siegel, Cheryl Bentyne, Alan Paul, and Tim Hauser.
The lead singer in this video is founding member Tim Hauser, who passed away in Oct. 2014. The others, I believe, are Cheryl Bentyne, Alan Paul, and Janis Siegel -- and all three remain active members of The Manhattan Transfer. The other current member is Trist Curless along with the group's pianist and music director, Yaron Gershovsky.
I definitely need to feature more of their music.
*******


OK, that's all for now. For an update, please see my previous entry.
--Regulus
Posted by Regulus at 10:41 PM