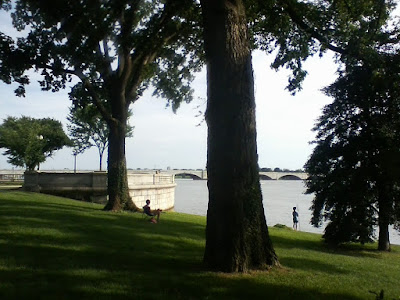 
A bit of political commentary ...

First of all, at the gym tonight while on the treadmill, I watched -- and read the close-captioning -- of Hardball. Chris Matthews has been relentless on the entire, slow-motion debacle that is the Trump presidency including the sprawling, metastasizing Russian election meddling mess. 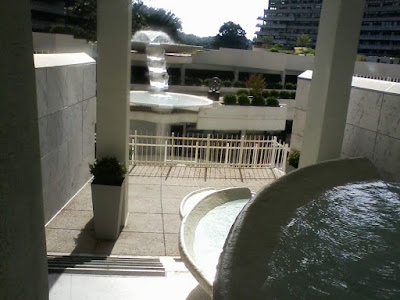 
The big deal for tomorrow (Thursday) is fired FBI Director James Comey's testimony before the Senate Select Committee on Intelligence. The prepared text was released on Wednesday and was the central focus on Hardball, All In, and the rest of the suddenly top-rated MSNBC line up (while Fox News flounders in its alt-reality). You can read Comey's testimony here.
Matthews pointed out how Godfather-like was Trump's demand for "loyalty" from Comey, not to mention the repeated and incessant contacts designed to get him to end all aspects of the Russian investigation. 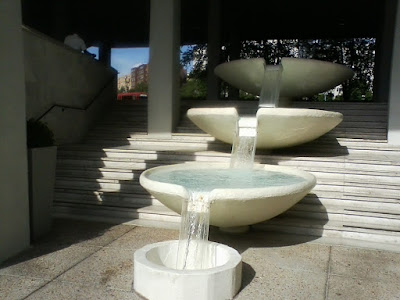 
However, as Jonathan Chait pointed out, there is basically nothing that Trump could do that would ever get the present-day GOP leadership to institute impeachment proceedings against him -- to include his obvious obstruction of justice because Trump is their vehicle to achieving their ideological dreamland. Here is the link: Trump Can Commit All the High Crimes He Wants. Republicans Aren't Going to Impeach Him. 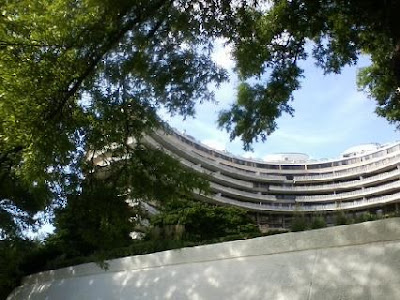 
Excerpt / Conclusion of Chait's piece:
Trump is faithfully supporting the conservative agenda, so most conservatives faithfully support him. Their concerns are pragmatic ones about his effectiveness on behalf of their common agenda, rather than moral objections to the legitimacy and propriety of his actions. Trump may have committed impeachable offenses, but the impeachment clock has not even begun to move. 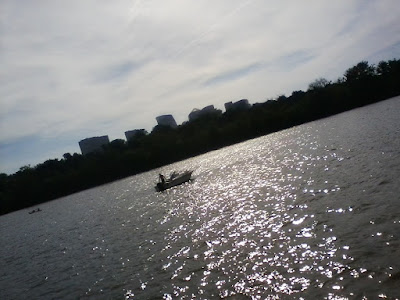 A small fishing boat on the Potomac River near the Kennedy Center, Washington, D.C., 5:29PM June 4, 2017.
The fisherman was shirtless and drinking what might have been a beer. He also had his dog with him. He seemed happy.
*******


This brings up a related point ... 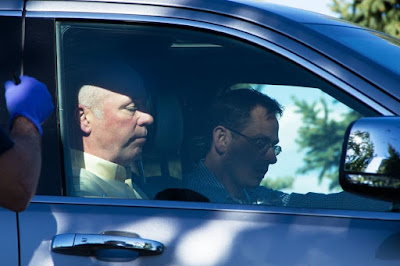 Greg Gianforte in a car with an aide shortly after his unprovoked physical attack on a reporter at his Missoula, Mont., campaign headquarters, May 24, 2017.
*******


That oversized, thuggish new Congressman from Montana -- GOP jackass and cretin Greg Gianforte -- that body slammed Guardian American reporter Ben Jacobs on the eve of the May 25th special election -- wrote a Court-mandated apology to the reporter and is supposedly making a $50,000 donation to the Committee to Protect Journalists. Story here. 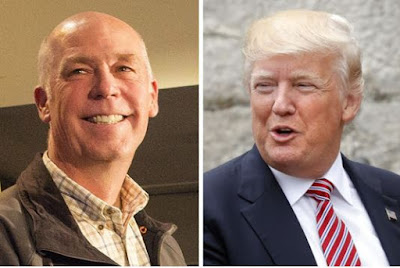 Greg Gianforte and the Orange One that is hilariously called "The President."
Naturally, Gianforte, a multi-millionaire fundie rightwinger Easterner transplanted to Montana, easily won that special election despite his unprovoked physical violence against a reporter who had the temerity to ask him a question about the abortion of a bill that is the GOP health care proposal. He is after all, a Republican -- or as Bill Maher once noted, he has the "magic R" after his name -- and there is no travesty, immoral act, or crime that a Republican political figure can commit that will EVER get the Red State faithful to reconsider their support. 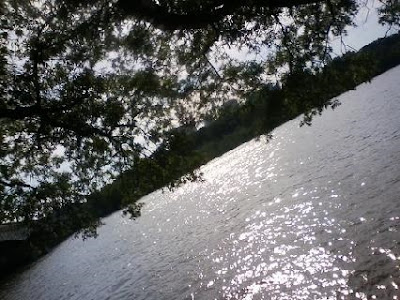 
In fact, these Fox News-addled Red Staters are only too happy to obliterate themselves and their families just so long as it means voting against the "Democrat(ic) Party." (To that end, there isn't the SLIGHTEST chance that the Democrat is going to win in that June 20th special election in Georgia.) 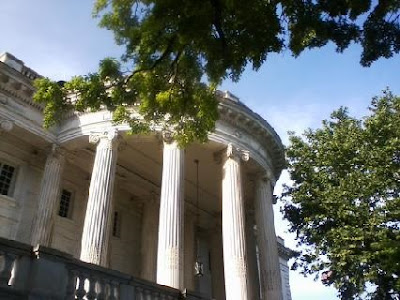 
Needless to say, the Gianforte's aggression also touched all the erogenous zones of the conservative movement propaganda organs, most notably that of the barely closeted Rush the Pigboy. They were all titillated by the violence. Jonathan Chait wrote about this here.
Finally -- and before concluding -- I'd like to note this Charlie Pierce piece in Esquire (link embedded): It Is Time for Donald Trump to Leave the White House.
The last two paragraphs are worth quoting in full: 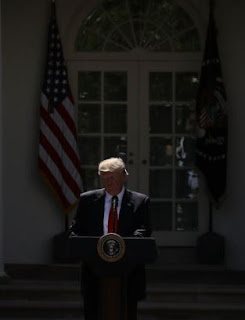 The Trump presidency is not an accident of history. Conservative politics has been moving toward something like it ever since Ronald Reagan declared that the national government was the problem. It has been enabled by a consistent trend toward civic disengagement, some of which was encouraged by ambitious men in the wake of Reagan's success.


And the genuine danger going forward is that the next ambitious American authoritarian will not be a half-bright bungler dancing on strings held by god-knows-which foreign autocrat or banker. 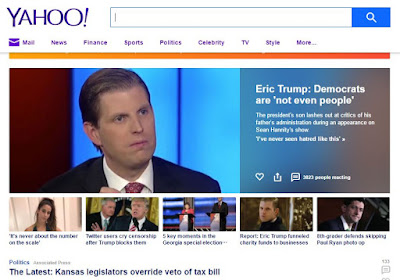 The next one might be better at it. After all, the template has been established, and the Republican Party has demonstrated a taste for authoritarianism that history says is hard to shake. The Trump political template has to be crushed to dust so that it never rises again. Until it is, it remains a cancer on the republic that's only in the most fragile remission. 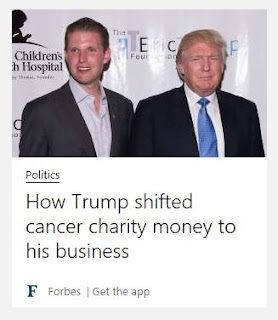 It is time for all of them to go: Steve Bannon and his dreams of being the king of chaos, Reince Priebus and the other hapless throne-sniffers, the children with their many scams and their clearly unresolved Daddy issues -- all of them. But, most of all, it is time for him to go.


The anger of the marks whom he conned last November cannot be used to dodge the obligations that fall on politicians that know what their duty is, but still fail to do it. History demands a bit of courage every now and again.
Of course, that would just leave us with President Pence -- a competent far right theocratic tool of plutocracy and oligarchy -- and a GOP Congress ready to return us to the late 19th Century.
******* 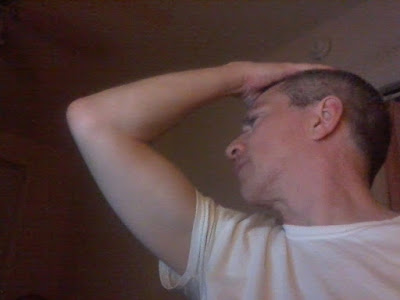 As the briefest of updates, I did my laundry tonight after the gym (where I went after work). Tomorrow is a non-gym night and I'd like to stop at Bobby Vans (on 15th Street) for some dinner at the bar and then stop at Trade. 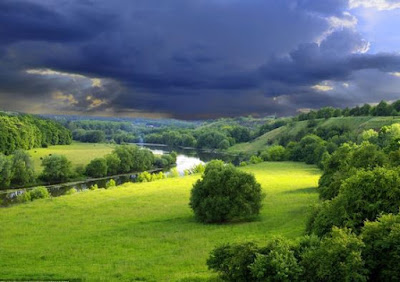 Pretty riparian bucolic picture. I've no idea where, when, or by whom it was taken.
Today was partly cloudy and pleasantly cool (highs not quite 70F) with a northeasterly flow. However, the weather next week is set to turn 95F hot, humid, and shitty with no rain, perhaps restarting the drought we just ended. Staring down the barrel of months of this crap, I hate this time of year in D.C.
OK, that's all for now. I'll try to post an entry on Friday. My final batch of Chicago pictures I'll try to post this weekend. To be clear, I will post them at some point.
--Regulus
Posted by Regulus at 3:03 AM