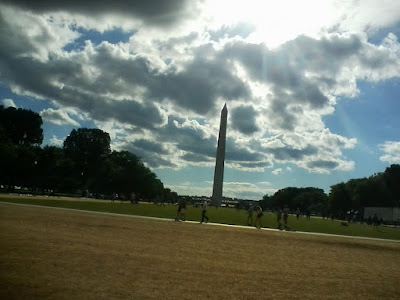 The Washington Monument and recently re-grassed National Mall, Washington, D.C., 5:36PM May 26, 2017.
That picture was taken on a particularly nice afternoon.
The pictures in this entry were taken on Friday -- many of which during my 20-minute walk from L'Enfant Plaza to Bobby Van's restaurant on 15th Street via the National Mall where I met Andrea. A few were taken much later at Blaguard in Adams Morgan with Imara, Jake, and Matt.
*******


This is a recap of my past two days. This is not the political-themed entry that I have partially composed and would still like to post before my Chicago trip. 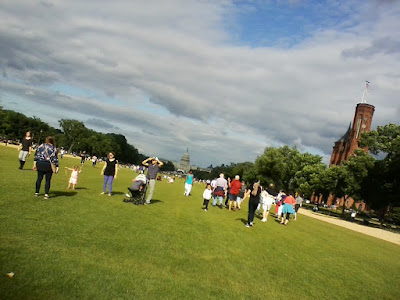 
Yesterday, I left work a bit early (everyone having bugged before me ahead of the Memorial Day holiday weekend thanks, in part, to the federal government giving two hour early dismissal) and walked from L'Enfant Plaza to Bobby Van's steakhouse on 15th Street NW (near the White House and to be confused with Bobby Vans grill at New York Avenue and 12th Street NW).
My route took me across the National Mall -- recently reopened after that multi-year project to dig up all the severely compacted dirt and replace it with new dirt and grass, not to mention a new underground drainage system of pipes and whatnot. 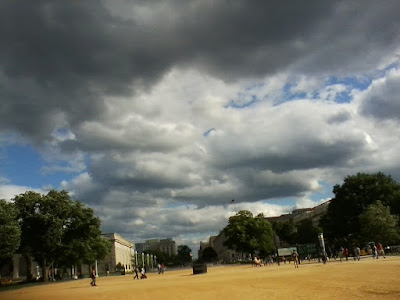 
The day was beautiful what with all the recent rain having turned everything so vibrantly green and leafy. The Sun was shining in a clean, rain-washed blue sky fleeced with puffy cumulus clouds brightly illuminated yellowish-white by the low-angled sunlight. There was as gusty northwesterly breeze and the air temp was about 75F and the dew point around 54F.
There was such a lovely feel to the day that even the throngs of tourists on and near the Mall were less annoying than usual. That never happens. 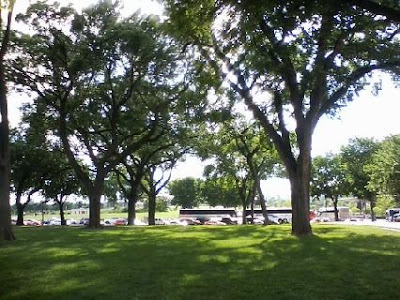 
At Bobby Van's -- my first time there -- I met Andrea. I don't get to see her much these days given her current position and responsibilities. We sat at the bar and had some excellent appetizers (the crab dip, the small pieces of filet mignon on bread, and a cheese platter) plus drinks (a Manhattan and some wine).
It was all very nice and very civilized (especially in contrast to so much of the rest of the night -- as explained below). 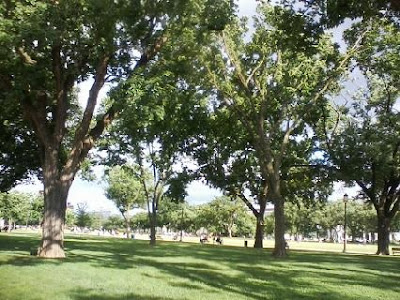 
Her husband, Imara, was with Jake and Matt at Rebellion on 18th Street and we took a taxi there. The place is located next to Larry's Trap House and Opium Den Lounge
Things went instantly very wrong in that way that seems to happen to me way beyond a normal statistical odds.
The waiter -- if that's what you would call him -- was about 5'11" and oblate spheroid, weighing in at least 320 pounds, dressed like a hipster slob, and covered in tattoos. He instantly aggressively insisted that neither Andrea nor I could sit at the table (despite the fact there was certainly room) because it violated the fire code. 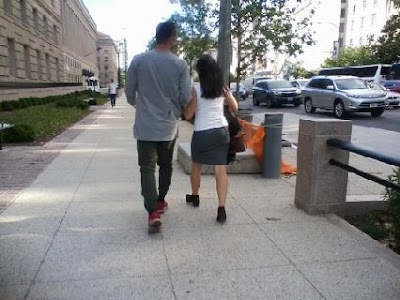 
He walked off and Andrea and I sat down anyway, whereupon he came running -- lumbering -- back, yelling that he would call the police. I lost my temper with him almost immediately and was immediately kicked out with physically threatening moves on this part. (To that end, I said fuck you and called him a hippopotamus while going down the steep stairs to the main level.)
To be clear, I never saw anything quite like it: The upfront belligerence, the aggressive approach that would have included physical violence (all the more startling for someone of that size), the screaming about calling the police on something so trivial, and just the whole absurdity of it.
That being the case, I won't be going back there. 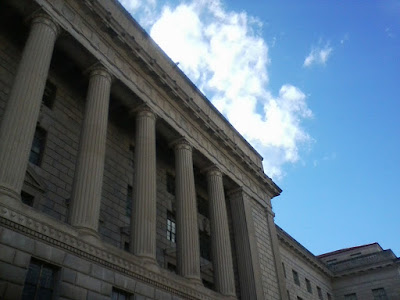 
The place (Rebellion) is trouble and I honestly cannot tell what the "look" for "vibe" or whatever the place is attempting in its catering to annoying D.C. millennials. As I see it, you do not run a restaurant like that. If there is a fire code issue, you have a sign up or something that alerts patrons upfront -- not through that approach by an out-of-control employee.
Rebellion is the place where this female bartender once worked with whom an ex-Larry's Lounge friend -- let's call him Uncle Fester because that's what he looks like -- had a big obsession (and despite the fact he is married and has a young child). When that situation blew up, she hurled glasses at him (as in, the things you drink out of). 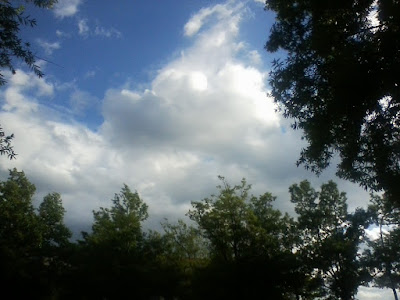 The sky fleeced with cumulus clouds above Pershing Park next to the Willard InterContinental Washington hotel, Washington, D.C., 5:49PM May 26, 2017.
*******


I left with Andrea while the others stayed. I was furious that such bullshit INSTANTLY was visited upon me by the fates or God or whatever. I also figured that the others would just stay -- since nobody, but nobody, EVER takes my side in these things.
I am fed up with being the bad guy -- and in this case, I was not even if I argued back and said what I said to him.
However, it turned out they were just paying the bill and we all left together and went to nearby to the Blaguard. At some point -- after more drinks and shots -- Andrea went home and the three of us just stayed out. Being with three straight young men (ages 28 to 32), we naturally eventually ended up at that skanky club called Royal Palace with naked female dancers performing gravity-defying acrobatic maneuvers on various metal poles on elevated platforms illuminated by spotlights. 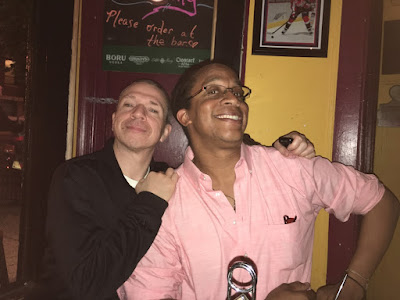 
Royal Palace has managed to survive in that prime location at Florida and Connecticut Avenues into the year 2017 and shows no sign of going anywhere.
The place was actually a tad less ghastly than I remember. The female dancers did not come around the tables demanding money -- and insulting you if you didn't give it to them. And the door bouncer was not doubling as the deejay -- grunting into a microphone, "Yeeeaaahhh .... Look at dat. You can SMELL da funk!" 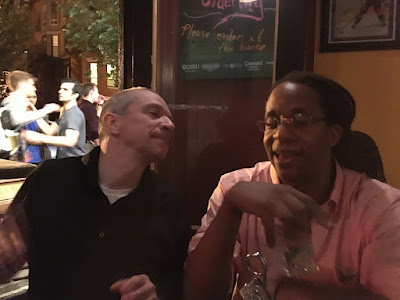 
Actually, now that I think about it, I recall that I was the one who recommended going there rather than to the strip clubs farther away on M Street NW.) I don't quite remember leaving but I made it home safe and sound -- and did not finally get up until 320PM this afternoon, although I woke up a number of times throughout the morning. 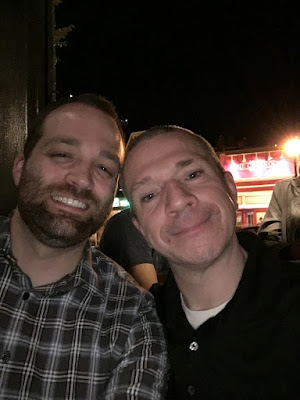 
Once up for good, I made it to the gym and got in a 5-mile jog and almost an hour of moderately strenuous weightlifting plus a swim. I'm home now in my wee apartment, two lamps and the window air conditioner turned on. I just finished four loads of laundry. I may go out a bit later to No. 9 and Trade, but I'm really quite tired and want to be in bed by 2AM. 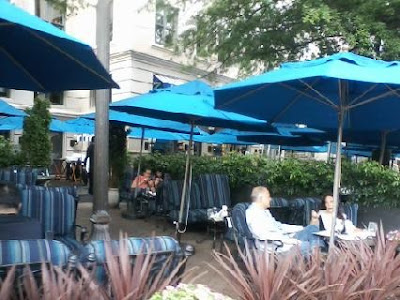 
Tomorrow, my mom is taking the MARC train into D.C. to Union Station and we are going to lunch somewhere -- either there or take a taxi somewhere else. I was thinking maybe of Circa DC in Foggy Bottom and then, weather-permitting, showing her the Top of the Gate bar atop the Watergate hotel.
Monday is the Memorial Day holiday, and I have it off from work. However, the gym closes early that day -- 4PM and pool by 330PM -- so it is unlikely I'll be able to make it. 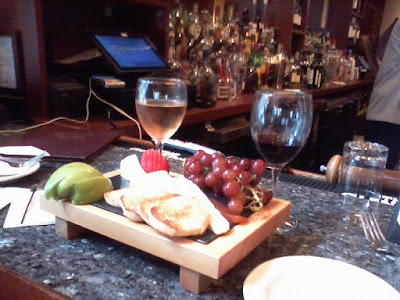 
Looking ahead to next week, I leave for Chicago on Tuesday for the two-day workshop on Wednesday and Thursday. Thereafter, I'm taking off Friday to just sightsee -- as I may have mentioned recently, I've never actually been to Chicago (other than passing through O'Hare or Midway).
I was not able to get rooms for Thursday - Saturday nights, inclusive, but a former coworker named Amanda offered to let me stay at her apartment with her and her boyfriend. (To be clear, I have a (nice) hotel for Tuesday and Wednesday nights but that is part of the workshop and is on the government's dime. The rest is my own time and my responsibility.) I'm scheduled to return on Sunday evening, June 4th. I kind of wish I had made the return date instead on Saturday. 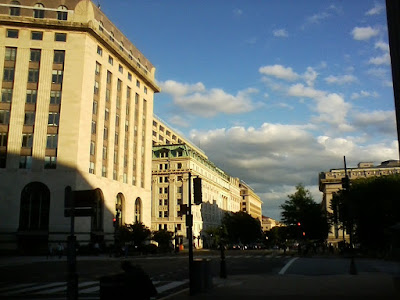 
OK, that's all for now. My plan is to post an entry either tomorrow or Monday.
This weekend's Jukebox Saturday Night entry edition to follow momentarily (as I already have it composed).
--Regulus
Posted by Regulus at 11:16 PM