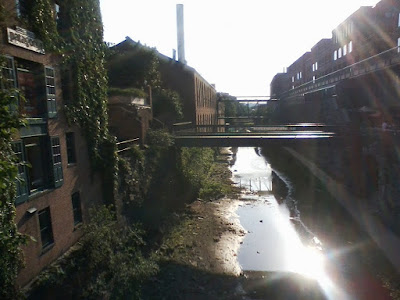 The C&O Canal in Georgetown, Washington, D.C., 6:17PM May 18, 2017.
I took this picture on one of the side streets between K and M Streets that crosses over the canal, which for its part, is presently mostly empty of water as some major renovation work is done on it.
The pictures in this entry were mostly taken on Thursday on my walk back from Georgetown University Hospital (as explained below).
******* 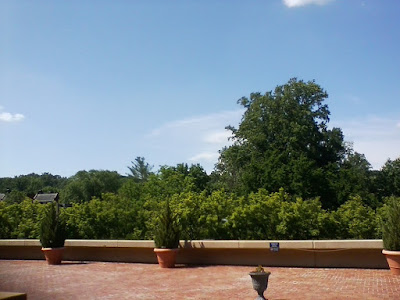 View outside Georgetown University Hospital, Washington, D.C., 3:16PM May 18, 2017.
Note the distant cirrus clouds -- with a distinct anvil shape. That was the supercell thunderstorm forming well west of Washington, D.C., that would later create such a dramatic sky vista (explained below).
*******


I skipped the gym today -- boooo! -- because I just didn't feel like going but instead wanted some needed quiet time at home. My plan is to go Monday, Wednesday, and Thursday, although I won't do the full hour-long treadmill jogs on each of those visits. 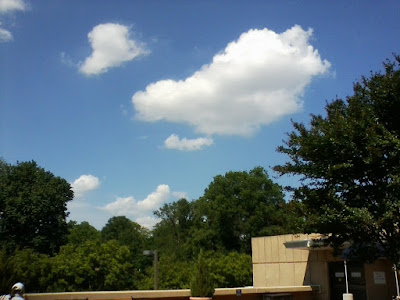 Another view outside Georgetown University Hospital, Washington, D.C., 3:16PM May 18, 2017.
Those are fair weather cumulus clouds in the bright, warm, blue sky of this hot May day.
*******


As it is, my weight has crept back up to 160 pounds -- from a low of 142 pounds but still down from my peak flab of 185 pounds in June 2012 -- and although some of that is definitely muscle mass (I do a reasonable amount of weightlifting at the gym), some of it is just relentlessly creeping middle-aged American fatness. 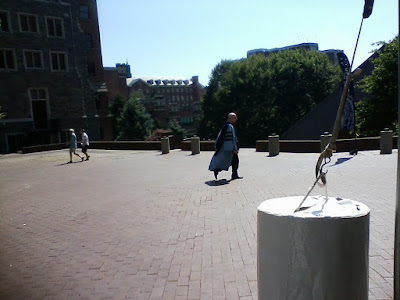 
So yesterday, I did a very dumb thing: I cut my hair with the Wahl hair clipper I bought at the Columbia Heights Target a few weeks ago, but I somehow managed to forget to put on the blade. I was in such a hurry to get started -- and I was sure I had put on the No. 2 blade the previous night when I opened the box -- that I basically gave myself a "No. 0" cut with just peach fuzz. 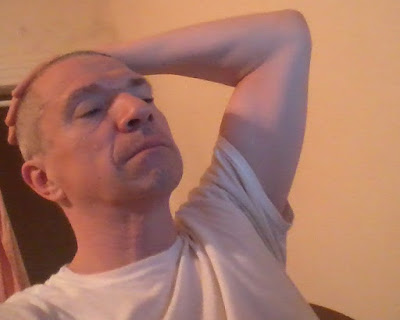 
It'll grow back quickly enough, but I am an idiot. It's precisely the kind of mistake that I would make.
Oh, and standing there in the bathroom in just some boxer briefs, I was covered in hair, and I was also a bit overheated having just come inside from the warm and humid afternoon, so I was sweaty as well with the hair sticking to me.
This created an effect not unlike that of a facially-tattooed skinhead. 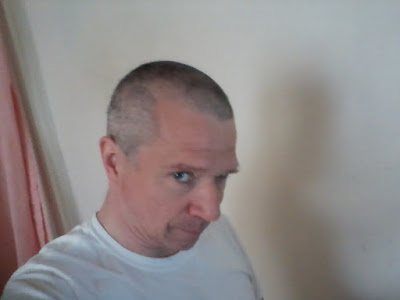 
I carefully picked up as much hair as I could and took a thorough shower before getting dressed and heading back out. I met Fred at DIK bar and then we went to Annie's and, thereafter, I made my way to No. 9 and Trade with the night ending in the usual fashion. I got home and went to bed -- with about an hour interlude being up around 530AM -- and didn't get out of bed until 215PM.
That's my life. 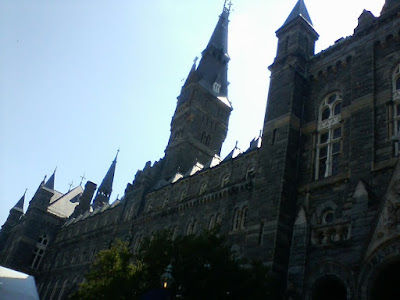 
For tonight, I'm going to Fred and Doug's place next door in the nice Northumberland building for a bit of dinner and to watch a few episodes of the old British comedy 'Allo 'Allo! Fred swears it is a great program -- and created by the same duo of Are You Being Served? fame (Jeremy Lloyd and David Croft). Of note, the actor who starred in 'Allo 'Allo! -- Gorden (Gordon) Kaye passed away this past January. 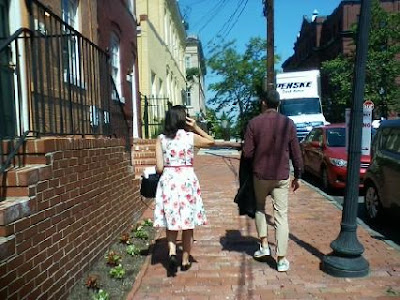 
Thereafter, I may go out to my usual pair of places, but I'm again in a state of severely overspent for this pay period, so I really cannot spend much until I get paid on Friday.
For tomorrow, I just intend to take a walk -- maybe on the Virginia side -- and stop for early dinner. 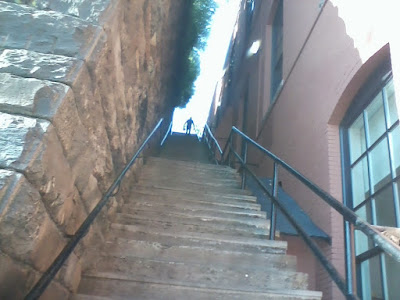 
Oh, yes, I forgot to mention: On Thursday, I made my way over to Georgetown Hospital and went to the Division of Gastroenterology ("DOG" -- yes, that's how it's abbreviated on certain forms).
I was poked by finger up the, as it were, Bight of Biafra region and talked about consistency, texture, and solidity of poop, sorry, defecation. I think there was a section or two in Gulliver's Travels about that.
There were also questions about sexual activities. (In my case, it has been zero for about the last 12 years and not much for 3 years prior to that.) 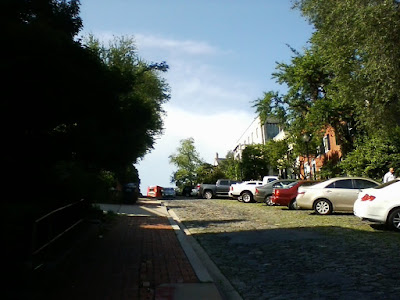 
Anyway, the good news is that the main doctor does not think I need a colonoscopy for the time being. Instead, he recommended an endoscopy in case I have any ulcer-related issues or damage to the esophagus due to periodic severe acid reflux from which I suffered about 10 to 12 years ago.
So instead of a Bight of Biafra expedition, it's one via Djibouti into the Great Rift Valley.
I should note that the problem I was having that brought me to the DOG facility in the first place seems to be ameliorating itself. 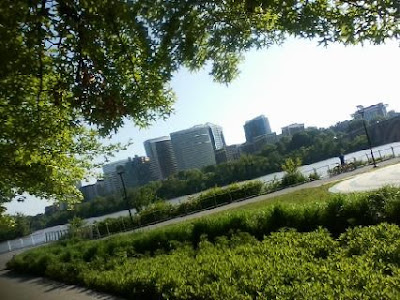 
Thereafter, I stopped at the Tombs for a couple drinks. It was "Convocation Day" at Georgetown University just ahead of this weekend's graduation ceremonies, and I ended seated at the bar next to this fellow who is the president of the Georgetown alumni association.
He is an attorney in New Jersey and one of this two daughters attends Georgetown presently. He also showed me a few pictures of him and his daughter climbing Kilimanjaro in 2014 -- reaching the summit. He was 65 years old at the time. That's impressive. 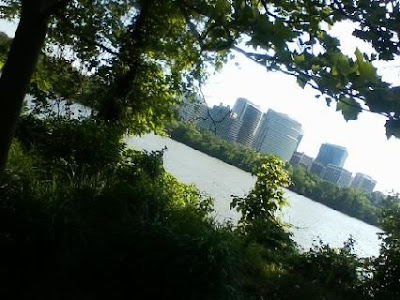 
Next, I went to Mr. Smith's in Georgetown (at it's "new" K Street location) and had a nice dinner before continuing on and meeting Fred at Trade.
That was my Thursday. 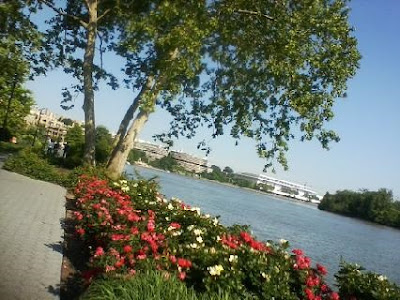 
It was a hot and sunny day (temps around 90F, although KDCA only reached 88F) with creeping humidity, and in the early evening, a large supercell thunderstorm formed west of D.C. -- slowly and dramatically moving toward the area. It had the sort of anvil top and mammatus cloud formation that you typically get in the Great Plains, not in the eastern United States.
Dulles (KIAD) had some heavy rainfall -- 0.61" -- while National (KDCA) just picked up 0.03". What was really amazing was the "anvil crawler" lightning display that occurred at dusk as cloud-to-cloud lightning forked its away through the mammatus clouds "underbelly" of the thunderstorm cloud tops.
Mammatus clouds are formed basically by an upside down convection. 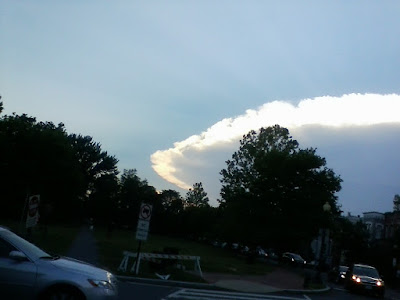 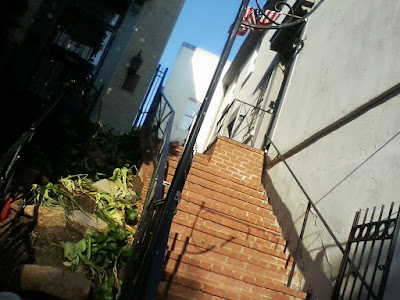 
Yesterday was another hot day -- reaching at least 90F at all three airports and KDMH including 93F at KDCA. Today, the weather is mostly cloudy and much cooler with temps around 70F and an easterly (maritime) breeze. There are rain chances between Sunday and Thursday with temps not forecasted to break the 80F mark all week. 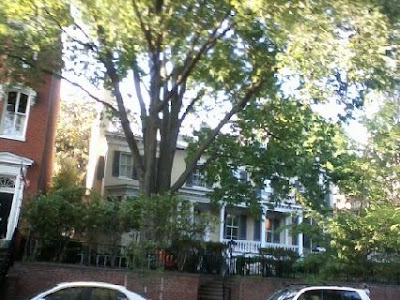 
OK, that's all for now. I'm refraining from any political commentary in this entry in the interest of time. A jukebox Saturday night entry to follow momentarily (as I've already composed it). 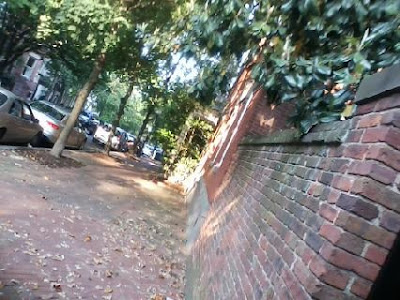 
My next planned regular entry will be late Monday or a bit after midnight Tuesday.
--Regulus
Posted by Regulus at 8:00 PM