This is just a quick update on this Memorial Day holiday as I need to get out and about. (Yes, once again I got up at 130PM. Oh, well.)
My planned lunch with my mom yesterday did not happen. Once she heard it was Rolling Trump Voter Thunder event in D.C., she nixed the idea of taking the train into the city.
On a Trump Voter note, here is a totally non-shocking story: The U.S. is the most obese nation in the world, just ahead of Mexico. 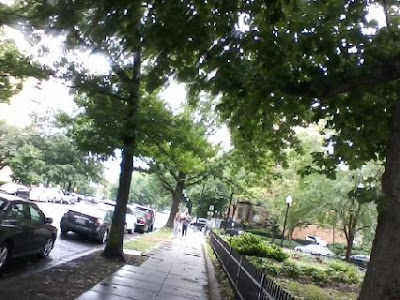 
Anyway, instead of meeting my mom for lunch, I left my apartment around 3PM and walked down to West End to have lunch at Café Deluxe, a restaurant adjoining a hotel.
While there, this fellow named Greg visiting D.C. for just one day started talking to me (we were seated at the bar). It turned out he was from Brisbane, Australia and on a whirlwind tour across Canada with a side detour to D.C. and New York City. I happened to catch him on his D.C. visit (his first time here and in the United States).
Greg is a 60-year old guy, never married (no, I didn't delve into whether he was gay, nor did I tell him that I am), who lives in an apartment in Brisbane and works in the central operations building for a friend train system. 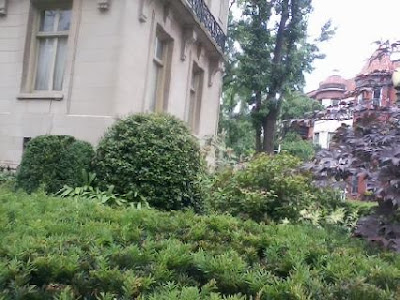 
I ended up taking him on a bit of a walking tour -- down to the Watergate, along the Potomac to the Lincoln Memorial (which was mobbed with tourists including those with obnoxious "selfie sticks"), along the Reflecting Pool past the World War II Memorial, and past the Washington Monument before detouring up 15th Street, where we stopped for a drink at Old Ebbitt Grill (in the Grant Bar where there just happened to be two bar stools free).
I pointed him in the correct direction back to his hotel in the 1100 block of New Hampshire Avenue and we parted in front of the White House on Pennsylvania Avenue. We didn't exchange numbers or emails or anything like that.
That was that. 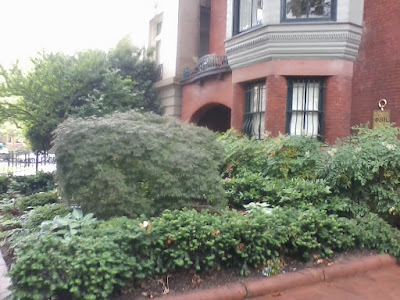 
Weather-wise, it was actually rainy for a few hours yesterday afternoon with overcast skies most of the day. Temps were only about 68F but dew points not far below that. This made for a partially busted / botched forecast -- at least from the CWG -- and that's fine with me, since the error was in favor of rain.
Actual amounts were light -- only 0.1" to 0.2" inches across the Baltimore/Washington region -- but it added to the monthly surplus and everything is very lush and green. 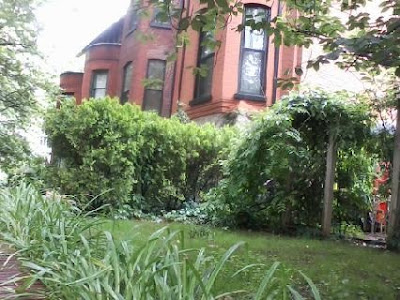 
Today is a partly cloudy, warm, and humid day with temps already about 80F and dew points about 68F. I am headed to National Airport because I want to see if I can move up my return from Chicago from Sunday to Saturday. I just don't want to get in so late on a Sunday night. 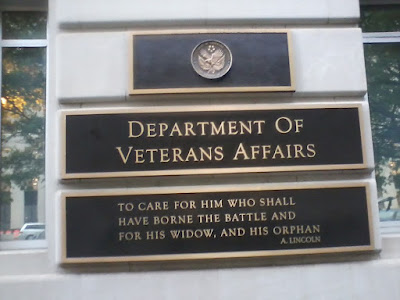 The plaque featuring the famous Abraham Lincoln quote outside the Department of Veterans Affairs headquarters, Washington, D.C., 7:29PM May 28, 2017.
*******


Thereafter, I would like to stop at the Tombs in Georgetown and then head back around with my usual stop at Trade. I plan to be home no later than 10PM tonight and in bed by 1AM. My flight is at 130PM tomorrow, so realistically, this means I need to be up by 830AM to do everything and get to the airport an hour ahead of time. 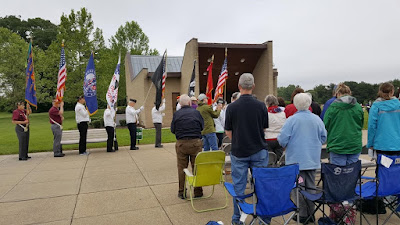 My mom sent me the above picture taken at the Maryland Veterans Cemetery in Crownsville where there was a Memorial Day service. It is sad, of course, since this is the first Memorial Day since Ray passed away and he is buried there.
OK, that's all for now. I'll try to post another entry tonight. I am taking my computer with me to Chicago.
--Regulus
Posted by Regulus at 3:20 PM