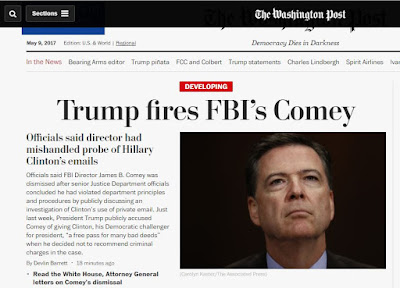 Wow! Also, at least in a temporary way: Awesome News!
Whatever the Trump oligarchy's reasoning and excuses for this stunning action, it remains that James Comey's inexcusable actions 11 days before the election helped make Donald Trump president -- and created the historical tragedy that is now unfolding in this nation's history. And now -- just a few days after what turned out to be deeply misleading / factually inaccurate testimony to Congress about why Comey did what he did -- Trump has fired FBI Director Comey. 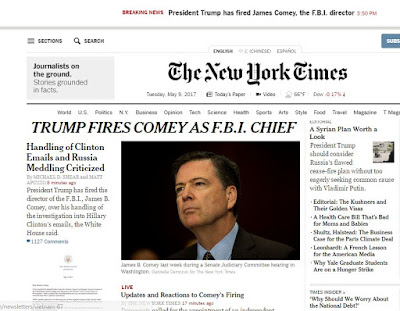 True -- Trump is going to put in the worst of the worst troglodyte imaginable in this Elmer Gantry-ized Reality TV show version of GOP Gotterdammerung with the purpose of squashing the Russian election meddling investigation and getting a loyal "team player" to head the FBI -- but still, this is good news. Comey made his pact with the Devil because he himself is a preening self-righteous partisan hack and now that pact has bitten him in the ass -- hard. 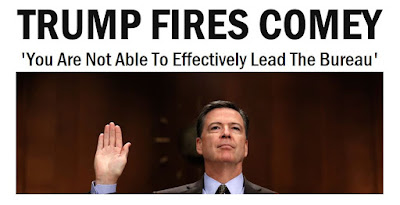 Why Trump did this -- the ostensible reasons and the real reasons -- are the subject of frenetic speculation this evening. On that point, and needless to say, the Beltway media/political establishment is in a manic frenzy tonight with a chaotic tweetstorm engulfing the Capitol. 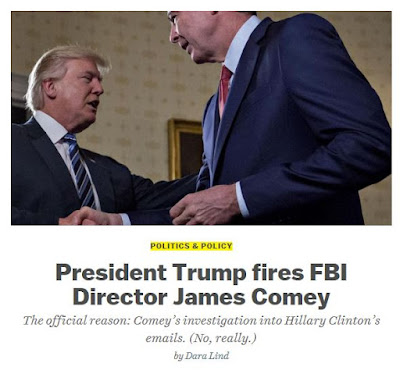 Here is a good Vox.com headline on the matter this evening. Story link here.
Get this part in the supporting letter from Deputy AG Rod Rosentein:
"...I cannot defend the Director's handling of the conclusion of the investigation into Secretary Clinton's emails and I do not understand his refusal to accept the nearly universal judgment that he was mistaken. Almost everyone agrees that the Director made series mistakes; it is one of the few issues that unites people of diverse perspectives."
Wow.


Here is an image of the letter Trump sent to Comey: 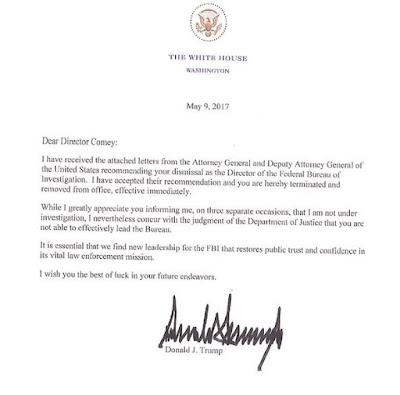 Wow. This is one for the history books.
Just look at Trump's psychotic signature.
Copies of the letter and the supporting documentation, such as it is, are available here.
OK, I'm going to keep this entry limited right now. Let me just say, again: Wow. 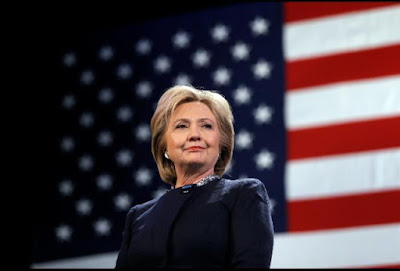