Entry #2,222: Dateline Chicago - Looped In But Not So Deep-Dished 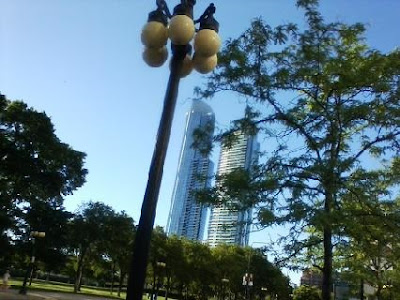 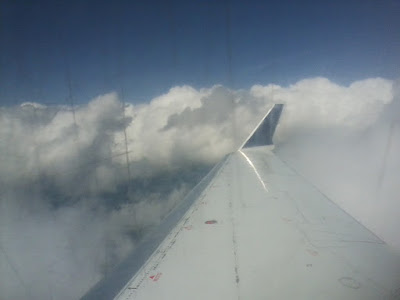 
I flew into O'Hare (not Midway) yesterday via Cincinnati*. O'Hare International Airport is scary big and crowded, but I managed to find my way to the baggage claim and retrieve my one large duffel bag. I then made it to the CTA -- also called the "L" -- and caught an old Blue Line train (car 2626, I noted) into Chicago.
Chicago is enormous and its rush hour snarls commensurate with its size, or so it seemed on the route I followed into the city's Loop area.
(*OK, the airport is actually in Covington, Kentucky -- so that it was my first time in Kentucky since November 1984 with my dad. Wonderful Just where I wanted to be.) 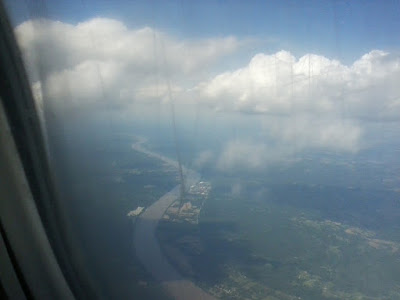 
I had intended to post an entry last night but the hotel -- the Blackstone Renaissance -- charges $14.95/day for Wi-Fi. You'd think for $222/night (government rate this time of year), you'd get it complimentary, but you would be wrong.
I may sign up for it tonight (my last night there) just because I want to post some pictures. 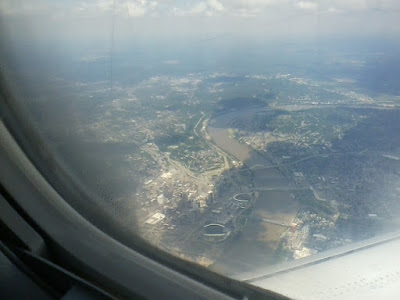 View of downtown Cincinnati on final approach into CVG, 2:42PM May 30, 2017.
The inbound route involves a loop to the northwest of Cincinnati and back over the Ohio River into the airport.
Oh, yes, at CVG, I stopped in a restaurant called Max & Erma's. The bartender twice called me "boss." Why do large, straight, young men always call me "boss"??
*******


In any event, right now I'm at the Illinois Institute of Technology (IIT) on a Wi-Fi network made available to those of us at a DOE workshop in the engineering center.
I'm on a lunch break and only have a few minutes to post an entry. A decent lunch was actually provided. (OK, I actually finished this entry later in the afternoon.) 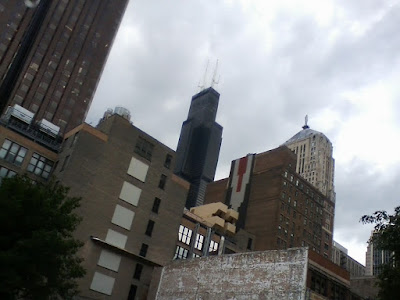 
So I have mixed feelings about Chicago. It's a gigantic city that has basically everything -- in that way, it's like New York, only more spread out, perhaps not as grimy in its inner core, and with more Middle American beefcake. But it also has vast, rundown areas of poverty and urban blight and pathology.
The skyline is huge -- and dominated by its skyscraping iconic structures of the Hancock Tower and Sears, er, Willis Tower. As in Atlanta, there are skyscrapers flung far and wide, not just in the urban core. 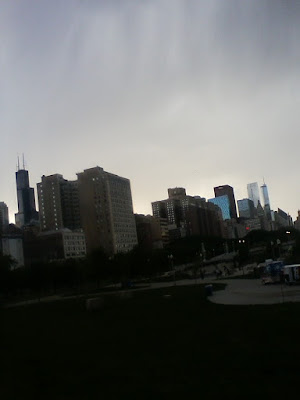 
Many of these skyscrapers are old and rectangular and seen in the brilliant morning sunlight (while riding two stops on the Green Line train from the Roosevelt station to Bronzeville/IIT) created the weird sensation of the dream city of "Limbo" in the movie Inception.
The city's subway system -- which is at least as much above ground than below ground, or so it seems -- is vast and confusing with multiple color-coded lines. There also seems to be multiple names for the system: CTA, "L", and "Metro" -- not to be confused with the "Metra" system -- and which uses the "Ventra" electronic fare payment system. Then there's PACE and something called Jump.
CTA cards are $10 a pop -- and I had to use my credit card rather than cash (and enter my D.C. home zip code). 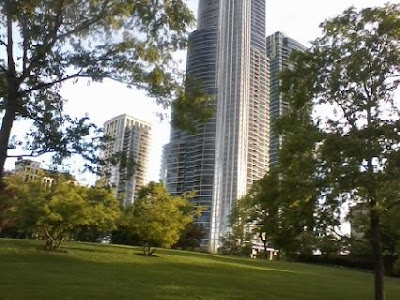 
The city's grid system is straightforward in the sense of block numbers with directional abbreviations (e.g., N, S, E, W) So way out at O'Hare, it was something like 8400N and 4800W. Or something like that. Where I am staying, it's basically 600S, 50E.
The hotel is alright but somehow there is no shower curtain or door -- just a semi-entrance with fixed glass partition. The bed has only those light hotel sheets, no real blanket, and no spare one in a closet. I'm in room 1405 so I can see Lake Michigan if I look sharply to the left, otherwise a massive building that is either a hotel or some sort of hotel or dorm room blocks the view straight ahead of me and down Michigan Avenue. 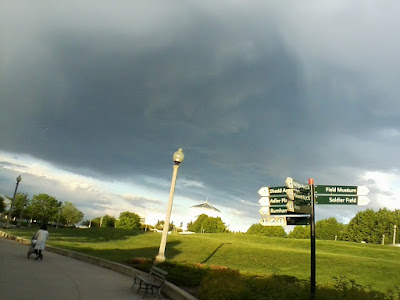 
I got off the Blue Line station (at LaSalle) and after a confusing, vexing walk, I made it to the hotel but soon headed back out. There was a brief heavy shower and then -- over the next few hours -- there was an absolutely spectacular evening sky of clouds and setting Sun as what looked like a dissipating thunderstorm cloud pushed to the east. There was even mammatus clouds associated with it.
The display culminated in a beautiful rainbow over tranquil Lake Michigan as I saw while walking along the Lake Front between 12th Street and Buckingham Memorial Fountain. I tried to take some pictures but my flip open cellphone camera in the evening light didn't do a good job. 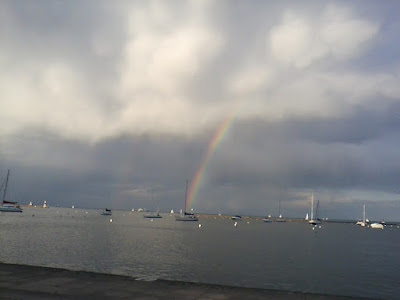 
Lake Michigan's waterfront in Chicago appeared remarkably free of litter / garbage -- but the water is this odd blue/green opaque color.
There were lots of joggers in the park jogging along the water. At least this part of the population is fit. 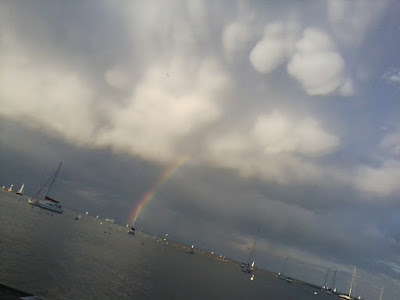 A rainbow and mammatus clouds over Lake Michigan from the Chicago Lakefront, 7:26PM May 30, 2017.
Lots of people were taking picture of this rainbow (which briefly started to go "double-decker"). There may have been a thunderstorm cluster earlier to the north -- toward Milwaukee -- the edge of which clipped Chicago.
******* 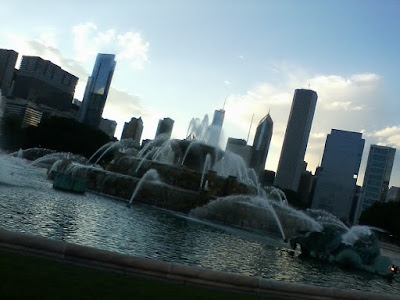 The Buckingham Memorial Fountain, Chicago, 7:33PM May 30, 2017.
No, I did not sing the Married, With Children theme song.


I wanted to have a nice dinner with American-style cuisine (I am in Chicago, after all), but there was no sit-down, open restaurant like that near the hotel. I may be the only person who ever came to Chicago and had trouble finding a place to eat. I think it's just that particular stretch of Michigan Avenue with its heavy concentration of hotels and theatres. To be clear, it was getting dark and there were lots of panhandlers about and I didn't feel like dealing with that in a strange city.
I ended up settling for the odd and noisy restaurant in the hotel -- a place Mercat a la Planxa offering only Catalan fare, something I did not really want. I had a conversation on the phone with my mom. She was feeling down. I went back to the hotel room and watched some TV -- including an episode of Modern Family with (speaking of Married, With Children), Ed O'Neill. 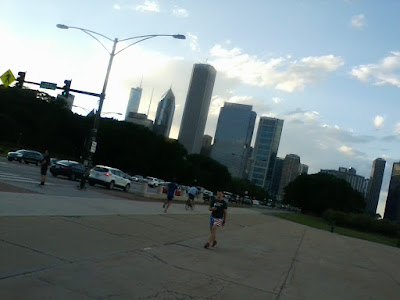 
I had a restless sleep with bizarre dreams and waking up numerous times, but I had no trouble getting up at 6AM (OK, that's 7AM EDT).
For tonight, I'm going to try to go to the hotel gym before getting dinner (where, I'm unsure), although I am included in the workshop group invitation to go to a nearby bar called Rocky's.
The main issue is that I'm just not really keen on a big Chicago weekend and to that end, I was able to shorten my stay -- with a return flight to D.C. (National Airport) via Detroit on Saturday afternoon rather than late Sunday night. If I had my own hotel, it might be different but I am staying with a former coworker and her boyfriend in their apartment not far from here tomorrow night at Friday night. 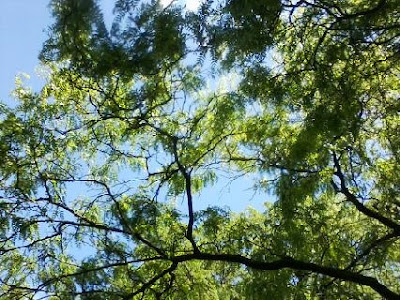 
Friday will be my one free day to walk about. I'll try to get over to Boystown (Lake View) and see if the Willis Tower observation deck is open. I will be staying at a friend's apartment in the 1900 block of S. Michigan Avenue -- so actually about midway between IIT and where I am now.
OK, that's all for now. My next entry might not be until I am back in D.C. this weekend.
--Regulus
Posted by Regulus at 7:06 PM