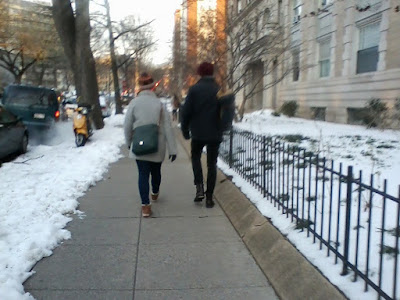 A couple walking on a blustery cold evening outside my apartment building, 2000 block New Hampshire Ave NW, Washington, D.C., 6:56PM March 15, 2017.
Yes, it's a blurry picture. My cellphone camera is cheap. Oh, and that green vehicle (some sort of RCN van) in a cloud of exhaust was furiously, even violently, trying to spin out of a snow-and-ice encrusted spot.
*******


Late night and I'd love to post a lengthy entry, but as I have to be at the peer review in Crystal City tomorrow at 830AM -- thankfully, the last day of the event -- and I'm tired, I can't write anything now. 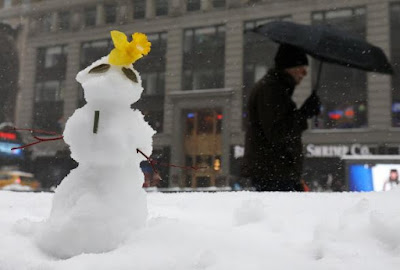 A man walks by a little snowman decorated with a daffodil in Times Square, New York City, March 14, 2017.
The daffodil bloomed early thanks to all the unseasonable warmth that is for now a memory.
*******


So the snowstorm -- "Stella" in the Weather Channel's dumb winter storm naming scheme -- was not a bust, exactly, although amounts were far less than forecasted in the Bos-Wash (I-95) corridor and there was a lot of sleet. Here in the immediate D.C. area, 2 to 4 inches of snow fell. The NWS opted to discount the model that turned out to be the most correct -- namely, the NAM and its resolution permutations. I'm not going to get into this right now. 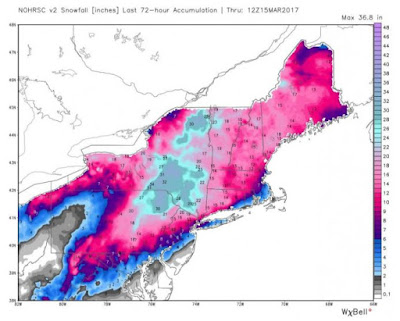 Sterling (LWX) NWS radar in standard base mode reflectivity mode looped between 5:12AM and 5:48AM EDT March 14, 2017.
This radar image captured rainfall falling over the lower and middle Chesapeake Bay and heavy sleet / mixed precipitation into the Baltimore/Washington area.
*******


The weather has turned unpleasantly cold with highs today barely reaching freezing at KDCA and remaining mostly in the 20s Fahrenheit with a biting northwesterly wind that kept wind chills in the teens today.


Preliminarily, it looks like the highs were 33F at KDCA, 31F at KIAD, and 30F at KBWI. (I think KDCA narrowly missed a record low high temp -- something that almost happens in the winter season in the present era; usually, it's a record high low temperature.) The snow that fell has frozen into a solid block of ice and it feels like mid-winter. This follow, of course, a practically hot February.

Ft. Dix AFB (DIX) NWS radar in standard base mode reflectivity mode looped between 8:57AM and 9:33AM EDT March 14, 2017.
My childhood best friend Jonathan who lives in Neptune, N.J. (the place where I was born) said that only rain fell there. The rain/snow line was inland and to the north. Atlantic City Airport (KACY) recorded 3.23 inches of precipitation (rainfall) from the storm.
*******


It looks like the Yoshino cherry blossoms on the Tidal Basin aren't really going to have a peak this year -- instead having frozen and soon to wilt. 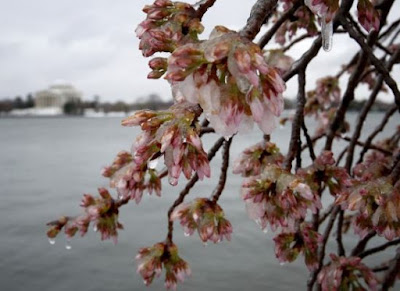 
It should warm up somewhat by tomorrow and there is a chance of rain on Friday -- which is good since it is still too dry. 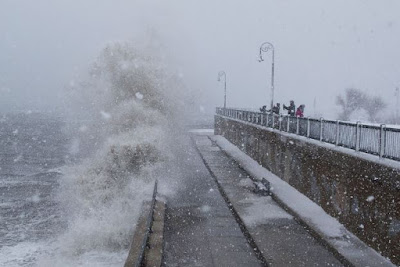 Waves crash ashore at Lynn, Mass., in a howling snowstorm, March 14, 2017.
I heard back a certain somebody Massachusetts who lives near Lynn who told me that 8 inches of snow fell followed by 2 inches of sleet /ice.
Logan Airport (KBOS) itself recorded "just" 6.6 inches of snow and 1.62" of precipitation. A lot more fell inland
*******


I made it to the gym tonight after getting to the peer review at 9AM this morning. My stomach was agitated all day -- and jogging at the gym didn't help but I found the perfect, secluded, nicely lit, lockable bathroom upstairs off a meeting room that was not being used at the 9PM hour. 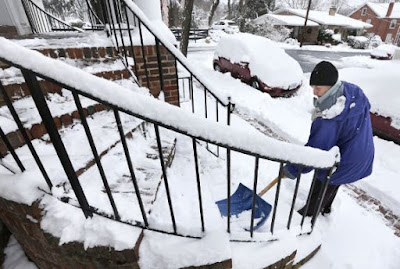 
Getting to work this morning on a crowded Metro and coming home on a cattle car of a train was even worse (remember that I'm not typically on the train at those times), but amazingly, the Metro trains were running quickly and not all screwed up.
Oh, yes, my mom's visit -- weather-induced -- was very nice with dinner at Logan Tavern. On the way back to where she was staying at the District Hotel, we stopped in for a few minutes at Trade. 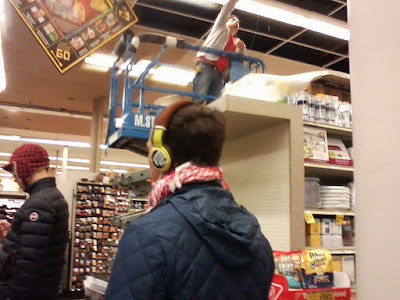 
OK, that's all for now. My next planned entry will be on Saturday. My plan is resume normal, annoying blogging next week. (Alas, another installment of BIG Y'EYEMAH's Friday Night Creature Feature will likely have to wait until the following Friday.
--Regulus
Posted by Regulus at 1:46 AM