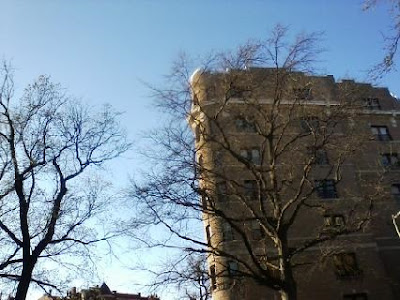 The Brittany at 16th St and New Hampshire Ave NW, Washington, D.C., 5:43PM March 12, 2017.
This is located across the street from my apartment building. That top rounded unit -- facing to the SSW toward Dupont Circle about half a mile away -- always intrigues me. Some rich, young millennial female lives there, I think.
******* 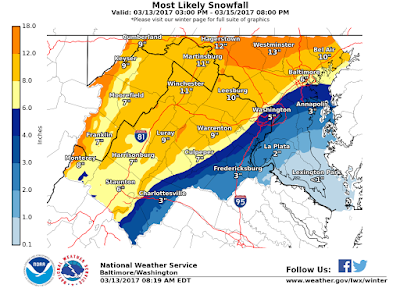 Sterling (LWX) "most likely" snowfall totals for its county warning area (CWA) to include the entire Baltimore/Washington area, valid through 8PM EDT March 14, 2017.
Even these amounts for the immediate D.C. area are generous, I suspect.


More and more, this would-be late season major winter snowstorm is looking like a big bust for the D.C. area with 2 to 4 inches of sloppy glop in the Inside-the-Beltway region and even less to the south and east until nothing but rain (itself welcome given our ongoing pre-spring drought) while 6 to 12 inches of heavy, wet snow falls in the far northern and western suburbs and exurbs. 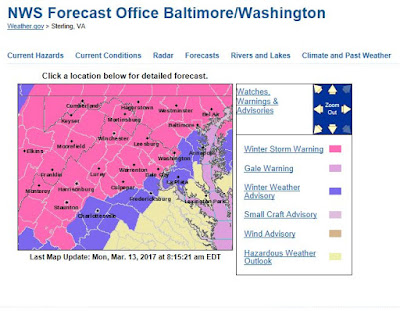 
In short, I see BUST written ALL over this.
By contrast, areas along the Jersey shore (including my birthplace of Monmouth County and childhood home in Long Branch), the New York City area, all of Long Island, and southern Connecticut are under the gun for a full fledged blizzard with 1 to 2 feet of snow and lots of blowing and drifting. 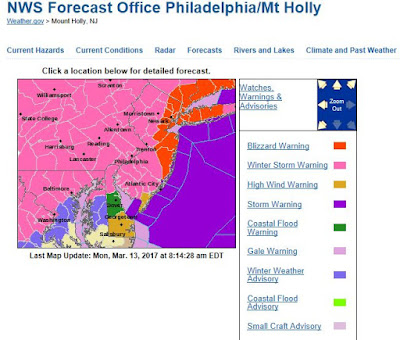 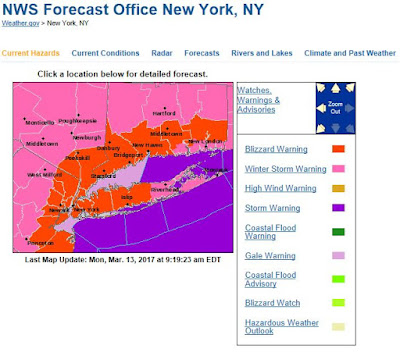 
Honestly, I couldn't give a damn if we get zero snow in D.C. -- except rain which, as noted, we really could use.
What IS really annoying to me is that I touted this storm to my mother because I was concerned -- esp. when I saw that damn Friday 12Z Euro run -- that she would be stuck in her little trailer near BWI Airport with no power and trying to shovel snow. As I told her, I could not be there due to a pressing work issue this week. 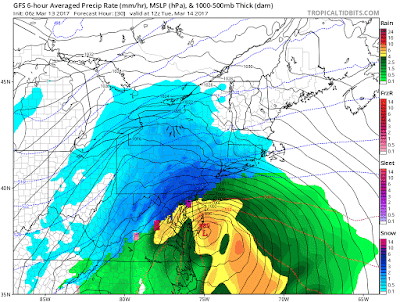 
So a costly decision was made for the sake of safety to have her stay overnight here in D.C. at a nearby hotel (my broom closet of a place is wholly unsuitable for staying overnight except in an emergency). I'm so tired of playing this winter season weather model snowstorm game, especially when there issues of safety and money are involved. High-res NAM model showing precipitation intensity valid 5AM EDT March 14, 2017.
By "high-res," I assume this is the 4-km or even experimental 3-km version -- possibly this morning's 6Z run. I got this image from a CWG entry and it didn't indicate the model time run.
*******


The Capital Weather Gang -- while trying to be as helpful as possible -- only inadvertently exacerbates the situation by touting all the possibilities including the most dire one. And the comment section becomes a free-for-all of those earnestly wanting a big snowstorm, the hardcore amateur meteorologists, the creative and talented, the "Mildists" wanting 75F and sunshine all the time, and the phalanx of trolls with their ever-shifting names and avatars trolling everybody. 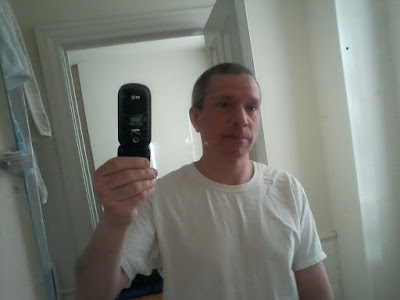 Yours truly in my apartment, Washington, D.C., 5:32PM March 12, 2017.
I barely got out of the apartment yesterday. And last night, I tried to finish that travel brochure for a colleague for an event being held in Versailles next month. How the heck am I supposed to know how to get a RER train from Orly or Paris Charles de Gaulle Airports to Versailles??
*******


Just for the record, I've LOOOOOOONG since stopped paying any attention to the local news when it comes to anything including the weather.
Anyway, for today, I need to get to the peer review in Crystal City. The event runs until Thursday but for today and tomorrow, I don't need to be there until my 130PM sessions, although I'd like to get there by noon. 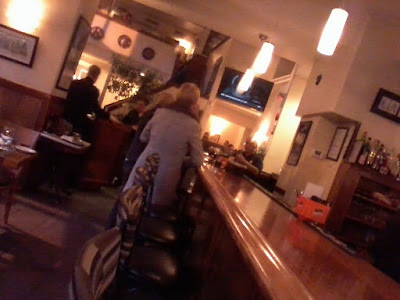 LaTomate, Washington, D.C., 7:27PM March 12, 2017.
The GM Jonathan is in this picture. He's a true Great Gatsby-esque East Egg blue blood (from Long Island, no less).
I stopped there yesterday for some dinner and had a conversation with a fellow named Ryan in town from Minneapolis (well, St. Paul), for a conference. Talking about D.C.'s reaction to snowfall was fun.
*******


For tonight, my mom and I will have dinner -- probably at Logan Tavern -- but I also need to get some groceries (I have nothing, and usually have no more than two days' worth of food in this dust trap of an apartment, which makes me supremely ill-prepared for any emergencies).
OK, that's all for now. Again, blogging is going to be very thin this week.
--Regulus