Back from a Nice Atlanta Trip: Brief Preliminary Update with Initial, Disjointed Batch of Photos 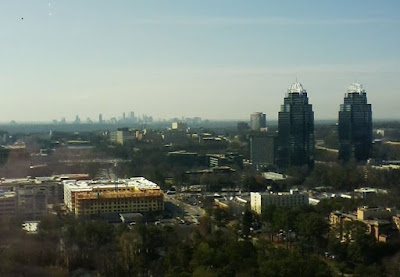 The view from an office building in Sandy Springs, Ga., to the south toward Atlanta including its Midtown and Buckhead area skyscrapers as seen from one of the large office buildings, 10:17AM March 5, 2017.
This building is located in a business district called Perimeter Center, an "edge city" that lies in the Atlanta suburban cities of Dunwoody, Sandy Springs, and Brookhaven. This particular building is where Chris works and is located, I believe, technically in Sandy Springs.
The twin skyscrapers nearby are in the Concourse at Landmark Center development with the twin 34-story skyscrapers known "officially" as Concourse Corporate Center V and VI but colloquially as the "king and queen buildings" because of their crowning white lattice tops resemble king and queen chess pieces. 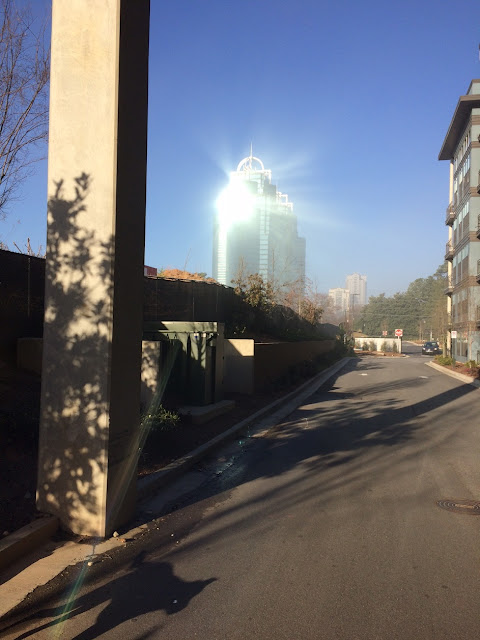 Amid clouds of lingering dust in the area, dazzling morning sunlight reflects off the glass façade and white lattice like structures atop the "king and queen buildings" in Sandy Springs, Ga., March 4, 2017.
What had happened is a nearby building had been demolished about an hour earlier and the air was filled with dirt and fine particulate dusty debris. The building was imploded around 7AM and I did not hear it -- or at least not directly. However, it may have been incorporated into a hung-over dream I had about a nuclear explosion. (More on that in a later entry.) 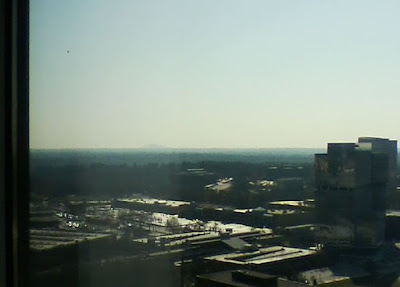 Another view from Chris's office building -- this one looking toward the east-southeast rather than south and south-southwest, Sandy Springs / Perimeter Center, 10:17AM March 5, 2017. If you look really closely, you can see just barely see Stone Mountain on the horizon.
*******


I'm back home in D.C. after what turned out to be overall a very nice hybrid work / pleasure trip to Atlanta. 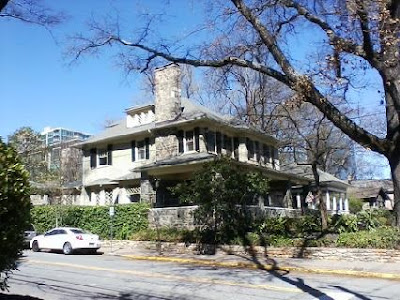 
I have literally 100 photos that I could post, but even posting half of them will take hours of blog entry composition time, and I'm unsure when I'll be able to do that. I could post a series of entries, but that too will take a long time. However, I do want to post as many as I can since I had such a good time, in particular in my visit with Chris. (I also have to note just how generous he was in buying me lunch and dinners.) 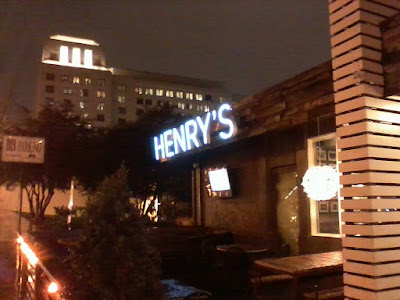 Henry's Midtown Tavern, Atlanta, Ga., 7:37PM March 1, 2017. This was on my first night in Atlanta. I was sort of drenched at that point from the thunderstorm rain.
This place, Blake's on the Park, and Ten Atlanta are the three main gay bars in Midtown Atlanta, although Henry's and Ten are also restaurants.
*******


There were only two minor hiccups on the whole trip -- one involving, a rude gay bartender (now there's a shock) and the fact that Chris's little dog didn't like me, or rather, is ultra-protective of his daddy (growling and nearly biting me once). (At other times, he was wet-nosed curious.) 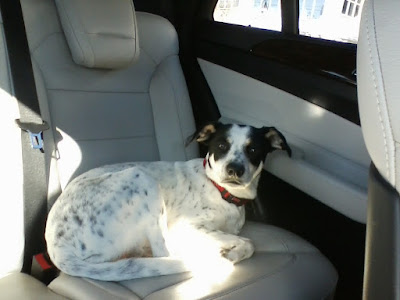 Finn settled in the backseat of Chris's vehicle, 4:05PM March 3, 2017.
We drove around quite a bit. Outside of the Midtown area, Atlanta is a car-centric city. It also has astonishing traffic congestion that have to rank it among the worst metropolitan areas in the country. It's the worst of D.C. traffic -- but at all times.
*******


My return trip earlier today (Sunday) from Hartsfield-Jackson to D.C. was uneventful and quick, although I was given extra scrutiny in security (that happens to me a lot -- not sure why, esp. since the very common police reaction to me is to see me as completely harmless). 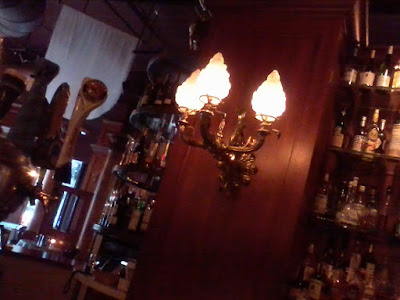 
While at the airport, I also met at the TGI Friday's in terminal "T" a young African American lady named Katrina from Hope, Arkansas returning home by way of Dallas/Fort Worth. (Yes, she's flummoxed by all the hurricane references.) 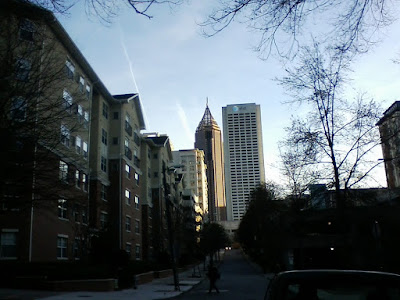 When I got back to the D.C. area, I helped the guy, Dennis, who was seated next to me -- a married father of two boys from the Atlanta area -- navigate the D.C. Metro system to get to his hotel in Rosslyn. (I also had to ride the Blue Line around to Metro Center since the faster way through L'Enfant Plaza appeared closed or otherwise bollixed up.)
It was embarrassing have to explain how screwed up is our Metrorail system ALL the time. 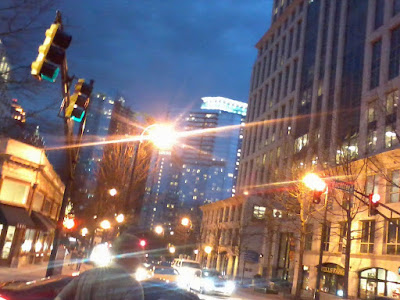 A stormy evening sky over Midtown Atlanta, Ga., 6:48PM March 1, 2017.
It rained heavily my first night there as line of thunderstorms associated with a cold front swept through -- and it got significantly colder after the near 80F warmth and humidity that greeted me when I got there.
*******


This evening, I made it to the gym and now I'm home. I very quickly got caught up in more Donald Trump chaos and wild recklessness that continues to suggest he is genuinely mentally ill. 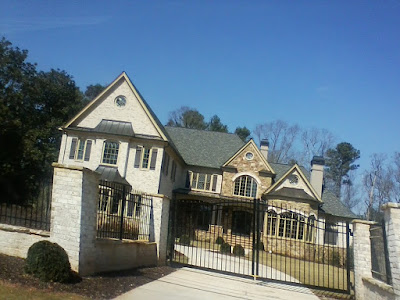 A McMansion along Mt. Paran Rd, suburban Atlanta, Ga., 2:05PM March 4, 2017.
I have this listed as "Atlanta" in the picture but it is technically outside (just north of) the city limits of Atlanta in Fulton County. (The whole issue of finding the "northernmost point" of the city of Atlanta was what led to this afternoon drive along Mt. Paran Rd.)
McMansions are very common in the wealthier enclaves of the Atlanta area -- although not all of them look like this. Yard landscaping can help a lot. What is true is that the northern suburbs of Atlanta are wealthy like the northwestern suburbs of D.C. (think Kensington).
*******


There is some poetic justice in the fact that Trump is now the intractable problem of the tools of oligarchy, assorted confused moral midgets, and the grifters and hucksters incapable of any actual governance that comprise today's GOP to include James Comey. (Of note, while away, I was able to most ignore the news -- if only because I wasn't online much.) 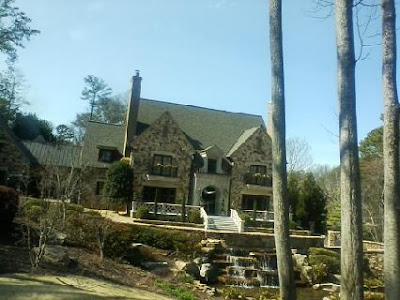 
It's a cold, still night with temps around freezing. We continue to be well below normal on precipitation, but the record warmth of last week has ended for the time being. (It reached 80F at KDCA on March 1st -- the earliest 80F day since March 1, 1976.)
As I'll write about in a subsequent entry, I got drenched in a thunderstorm that swept through Atlanta (associated with a cold frontal passage) on Wednesday evening. 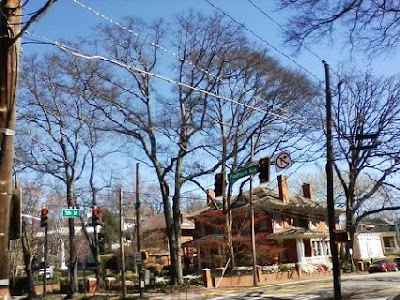 Intersection of Piedmont Ave and 7th St NE, Atlanta, Ga., 11:33AM March 3, 2017.
This is the residential section of Midtown Atlanta. As I mentioned in my previous entry, the Airbnb where I stayed in Midtown was wonderful. I need to write a good review of it.
*******


OK, that's all for now. I need to get to sleep so that I can get to work at a reasonable hour tomorrow.
--Regulus