Til Tuesday (Evening, That Is): A Late Night Interim Entry -OR- Neither Sugar Nor Spice and That's What Makes SNL's Trump Parody So Nice 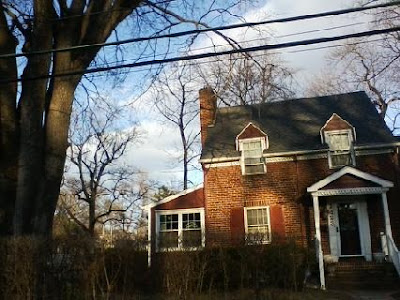 A cozy-looking house in residential Arlington (unsure the street but near Ballston), Va., 4:14PM February 5, 2017.
This is one of a series of pictures I took on Sunday in NoVa while with my friend Chester from the West Falls Church Metro to Ballston. I'll post additional pics in my subsequent entry.
*******


I'm back from the gym and home watching my suddenly now-usual trio of late weeknight Antenna TV-aired sitcom reruns (each in a pair): Wings, Becker, and Newhart.
I composed a lengthy entry but I still have to upload a series of pictures and do all the formatting -- but it is now quarter to 2AM and I just need to bed. 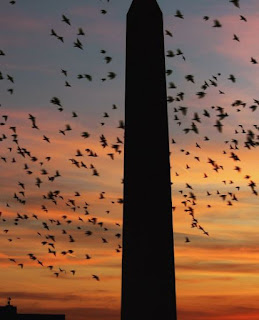 Of note, it is warm enough at the 2AM hour -- 50F at KDCA under mostly cloudy skies with scattered light rain showers -- that my window a/c unit that I have turned on for the blower / white noise is actually blowing cool (air conditioned) air. Highs were in the lower 60s today (61F - KDCA, KBWI and 63F at KIAD).


Above: Silhouetted Washington Monument and a flock of birds, Feb. 6, 2017; photo by Jim Havard.
I'll also have more to say about the weather and more abnormal warmth here AND at the North Pole in my next entry, which I plan to post after work tomorrow (Tuesday). 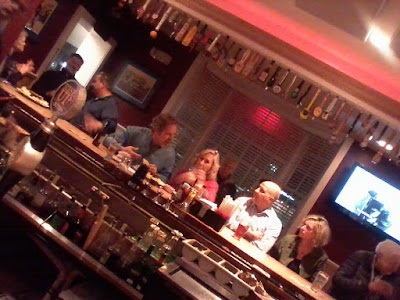 A picture at the bar at Adams Grille, Severna Park, Md., January 13, 2017.
This is one of the pictures that I took last month that never posted. I was with Chester after we took an evening / early night walk on the B&A Trail in Severna Park. This was after Ray's funeral earlier that day. Afterwards, Chester drove me back to my mom's place where I was staying for several days.
*******


Before I conclude, I would like to post the following two SNL clips from this past Saturday. The first is the cold opening with Alec Baldwin doing his awesome Trump impersonation -- in this case, riffing on the calls Trumpolini made to certain heads of state last week including the disastrous and deeply nationally embarrassing one to Australian Prime Minster Malcolm Turnbull.
The second clip is nothing short of awesome: Actress and comedian Melissa McCarthy's incredible and incredibly hilarious impersonation of a wildly combative White House spokesman Sean Spicer -- an impersonation that is spot on given how wildly combative Spicer with the White House press corps.
Spicer didn't like the imitation -- he said she should "dial it back" and that Baldwin's impersonation is "mean" -- but too goddamn bad and that just makes it better. (Trump hates the SNL impersonation and therefore tweets about it regularly.)
As usual, Jonathan Chait has written some excellent pieces about the insanity of our current political situation. I intend to post links / excerpts of those tomorrow as well.
OK, that's all for now.