Snow Joke: Much Weather Ado About Nothing (At Least for the Metro D.C. and Baltimore Areas) 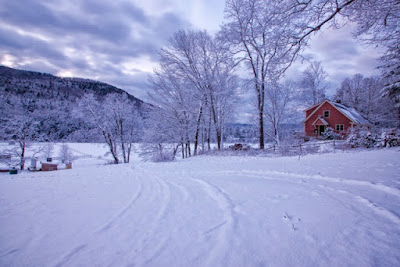 
I had fully intended to post an entry yesterday -- indeed, my previous entry basically guaranteed that I would -- but in the end I did not. It was a non-gym night and I stopped at The Bottom Line on I Street for some dinner and a couple drinks at the bar. The place was not crowded (nearly empty, in fact) and not noisy. 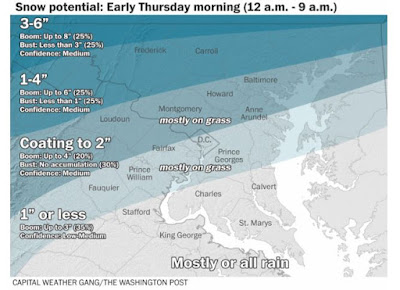 
As a weather update, there was record warmth yesterday with highs of 73F at KDCA -- surpassing the (admittedly low) record high of 64F yesterday set in 2008 and (in a pre-National Airport record) in 1887.

For today (Feb. 8th), all three airports have already broken their record highs and -- depending on how quickly or slowly the cold air arrives tonight -- may achieve record high (warm) lows. The records were as follows:


So far, the highs for today have been 74F - KDCA, 72F - KBWI, and 71F - KIAD, so all are new daily record highs.
None of this morning's (Feb. 8th's) lows were below 50F at the three airports, so it is quite possible that all of these will achieve new record warm lows -- depending on the time of arrival of the cold air. 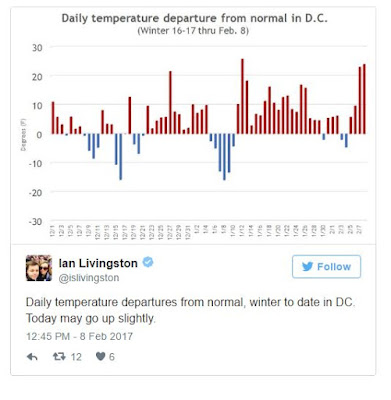 
About that cold air, a cold front is sagging southeastward toward the Mid-Atlantic and New England and a wave of low pressure is expected to develop along it while cold air advection rushes in behind. Favorable dynamics should cause the low to deepen quickly as it moves across Virginia and off the Delmarva / southern New Jersey coast by 7AM tomorrow.


Precipitation -- as rainfall -- should overspread the area but thicknesses will quickly drop, leading to a changeover to snow from northwest to southeast as dawn arrives. However, Sterling (LWX) -- in particular, WOODY! -- wrote the following in an area forecast discussion:
"We currently have a winter storm watch in effect. I am not going to alter this but I feel the possibility of 5" is tenuous at best. North of the Mason-Dixon line - yes. But in addition to having marginal temperatures - and given the last two days (MD road temps currently in upper 50s), the initial round of snowfall will melt on contact, AND the low will be moving rapidly off the coast making the time where snow can accumulate fairly short. The watch will likely be changed to advisories by mid morning, with the possibility of low-end warnings needing to be issued along the MD-PA border."
Here is the CWG entry about it. 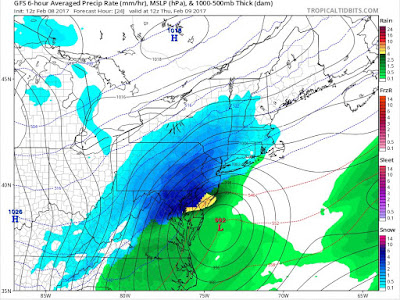 GFS 12Z Feb. 8, 2017 6-hr averaged precipitation (mm/hr.), MSLP, and 1000-5000 thicknesses for the Northeastern CONUS valid hour 24 / 12Z Feb. 9, 2017 as prettied up by the Tropical Tidbits.com.
Obviously, blue is snow and green is rain. The resolution here is too coarse and so it is not capturing the warmth over the immediate D.C. area that will keep this precipitation as rain. It is also unable to capture the precipitation elements the way, for instance, the 3-kM NAMX does: 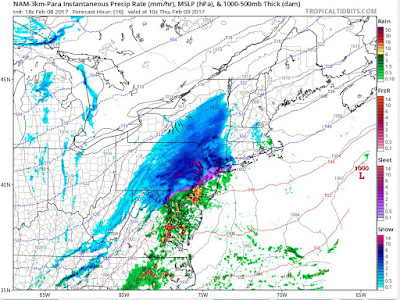 
Presently, the forecast is for rain turning to snow in the wee hours of Thursday with the possibility of a slushy coating in the District and points south, more to the north and west -- as well as to the northeast. Baltimore City is under a winter weather advisory as is northern Maryland and the Potomac highlands with winter storm warnings along the Allegheny Front and the usual upslope areas. 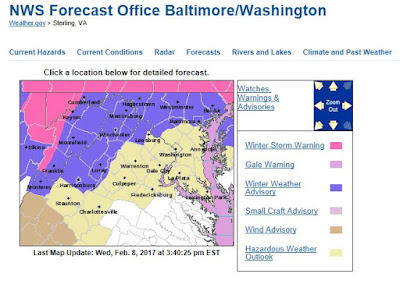 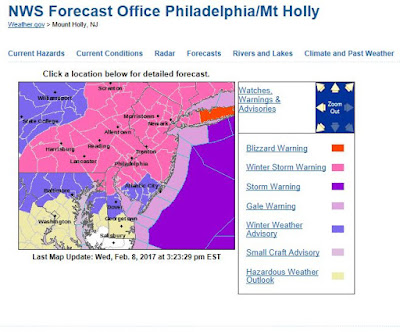 
All of eastern and central Pennsylvania and much of New Jersey (except far southern parts of the state) are under winter storm warnings for 5+ inches of snow in a quick, heavy pasting. Indeed, areas not far from New York City could get a foot of snow. What's more, there are blizzard warnings in effect for eastern Long Island and Cape Code as the nor'easter really gets cranking. 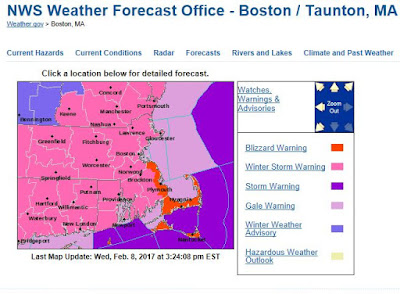 
Given the antecedent very warm conditions and that this is one of those situations where cold air advection and strong dynamics have to come together just right over the immediate D.C. area to give us any snowfall, I am highly skeptical. That just doesn't happen here that much. 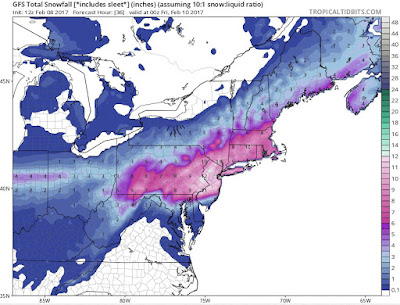 GFS 12Z Feb. 8, 2017 36-hour cumulative snowfall forecast through 0Z Feb. 10, 2017 for the Northeastern CONUS as displayed by Tropical Tidbits.com using a 10-1 snow-to-liquid equivalent.
Again, this is highly unlikely in terms of snowfall for the D.C. area southward and the Eastern Shore. Showing accumulating snowfall in the Tidewater area for this event is just absurd, but it is due to the model's resolution limitation.
******* 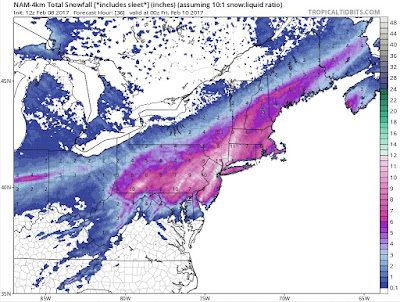 High-resolution) 4-km NAM 12Z Feb. 8, 2017 36-hour cumulative snowfall forecast through 0Z Feb. 10, 2017 for the Northeastern CONUS as displayed by Tropical Tidbits.com using a 10-1 snow-to-liquid equivalent.
Note how the amounts are significantly reduced in the D.C. area -- and all that nonsense about accumulating snow down to Norfolk goes away.
*******


To this point, today's 18Z runs of the NAM (various resolutions) and GFS backed off on any snowfall for this area -- but not for the New York - Boston corridor, where the totals were upped. 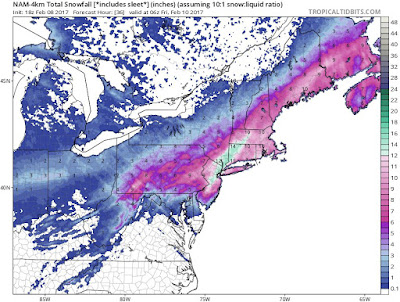 
Of note, this storm system is forecasted to blow up in the Atlantic Ocean and send what is basically modified tropical air into the polar region with yet another instance of freakish warm near and at the North Pole to include temperatures 50F to 60F above normal (which this time of year is about -30F) and thus flittering with the freezing mark, the fourth wintertime instance of this in the past year.
The CWG had this entry a few days ago: Massive hurricane-force Atlantic storm to push abnormally mild air toward North Pole. 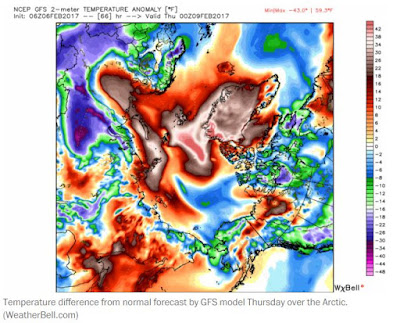 
Two points: First, don't expect any 4AM Donald Trump tweets about this. Secondly, I'd like these ever-more-frequent highly anomalous patterns have become commonplace in the past 20 years to include sprawling ridges more reminiscent of summer time, meandering cut-off lows, subtropical jets roaring into sub-polar latitudes in winter time, and the polar vortex regularly "knocked out of" the polar region / Arctic Ocean basin.
This was not how Northern Hemisphere winters "behaved" in the 1970s or previous decades of the 20th Century. 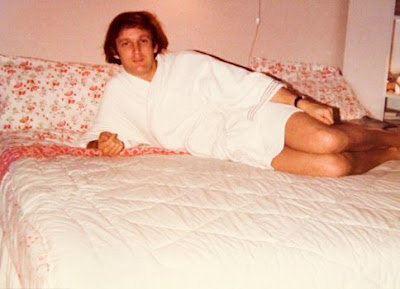 It is true that any given anomalous pattern in any given year is typically (and probably correctly) blamed on any number of alphabet-soup of coupled ocean-atmospheric oscillatory phenomenon, but the deeper issue is that we seem to be losing that sustained pole-equator temperature gradient as the polar (Arctic) region warms and the result (in whatever chicken-and-egg causation) are these winter-season-long atmospheric anomalous patterns.
The situation is different in the Southern Hemisphere since the Antarctic region is far more atmospherically isolated. 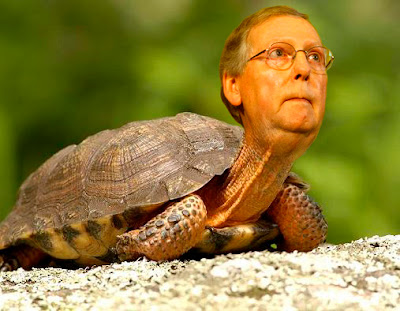 OK, that's all for now. I still need to post my Sunday walkabout pictures. It is unlikely I will post any more about this impending weather non-event since it is certain to be a non-event.
Tonight is another non-gym night -- I'll go tomorrow night and Saturday. Instead, I'm meeting up with Andrea to get some dinner. I'll try to post something when I get home but that's doubtful, which means my next entry likely will be late tomorrow night.
--Regulus