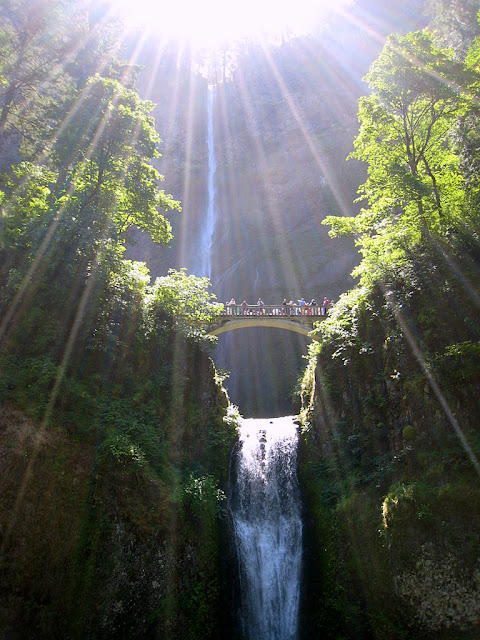 Dazzling sunlight above Oregon's Multnomah Falls with the stone footbridge called the Benson Bridge spanning the top of the lower cascade.
*******


Well, I was going to try to post a jukebox Saturday night edition -- but I am just totally out of ideas of what songs to feature. I actually started on an entry and then discovered -- to my incredulity -- that I had featured two of the three songs I was planning to include in tonight's edition in this Jukebox Saturday Night edition back in April 2014.
This included the Tears for Fears one and the Charlie Parker one, the latter one of which required a correction.
Anyway, I'm just out of ideas right now so I'm not even going to try.
I'm home waiting for my laundry to finish. Earlier, I went to the gym and had a full workout (jog, weightlifting, and swim). Last night, I met Fred upstairs at Annie's and then later went to No. 9 and Stoney's, where Howie was working. Overall, it was a good night.
For tonight, I don't have any real plans, just the usual Saturday night stuff (Trade and perhaps Old Ebbitt Grill Old Bar). Tommorrow, I think I'm meeting Chester -- he said he is free and coming into D.C. -- and we'll take a walk and get lunch. Tomorrow, I'm avoiding the Super Bowl outright, even if that means coming home early and watching some old sitcom reruns on Antenna TV.
I would like to try to have a productive week next week and one that follows a more normal schedule.
Before I conclude, below is a YouTube clip of the opening to Bill Maher's "Real Time" TV program from last night. He nicely encapsulates all the high (low) lights of last week's political developments in the ruling-by-chaos of the nascent Trump presidential regime.
As a counterpoint, of a sort, here is an interesting piece by New York Times columnist Ross Douthat: Who Are We? I really like Douthat's columns -- he is the conservative columnist that I often look forward to reading.
Wait -- I should add this as well: Bill Maher's closing comments under the rubric "Cheer No Evil" from his same "Real Time" show yesterday. He explains why he suddenly cares about who wins the Super Bowl and wants that to be the Falcons because the Patriots including its owner, its coach, and its fucking star quarterback -- Tom Brady -- are such pro-Trump ass-hats, and how everything has necessarily become political in the Age of Trump.
It's quite funny.


OK, that's all for now. I'll try again next week for a Jukebox Saturday Night edition. I don't want to give up the series.
--Regulus