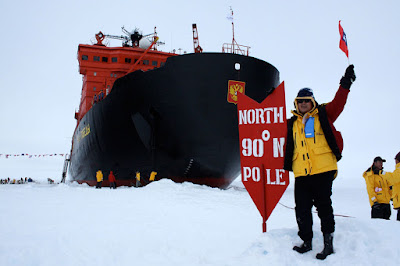 Yes, the view from Earth's geographic North Pole itself with a marker -- temporarily -- marking the spot. Remember, the sea ice floats around a lot so you can't actually keep a permanent marker there.
Source image here.
*******


Reposted below in its entirety (with several captions clarified somewhat) is a Capital Weather Gang entry from earlier today.
I'm happy to say that as of quarter to 810PM, my comment (Arcturus24) is the most liked (26) with the next closest well behind me (16). 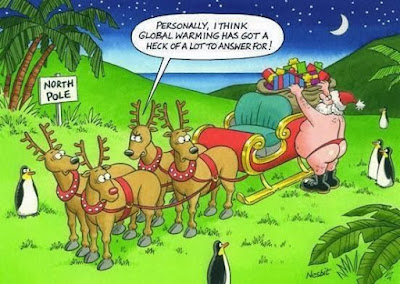 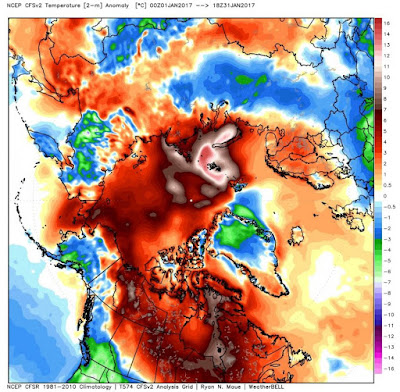 
The Arctic is so warm and has been this warm for so long that scientists are struggling to explain it and are in disbelief. The climate of the Arctic is known to oscillate wildly, but scientists say this warmth is so extreme that humans surely have their hands in it and may well be changing how it operates.
Temperatures are far warmer than ever observed in modern records, and sea ice extent keeps setting record lows. 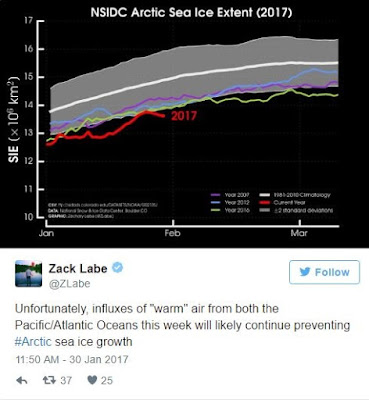 
2016 was the warmest year on record in the Arctic, and 2017 has picked up right where it left off. "Arctic extreme (relative) warmth continues," Ryan Maue, a meteorologist with WeatherBell Analytics, tweeted on Wednesday, referring to January's temperatures.
Veteran Arctic climate scientists are stunned.
"[A]fter studying the Arctic and its climate for three and a half decades, I have concluded that what has happened over the last year goes beyond even the extreme," wrote Mark Serreze, director of the National Snow and Ice Data Center in Boulder, Colo., in an essay for Earth magazine.
At the North Pole, the mercury has rocketed to near the melting point twice since November, and another huge flux of warmth is projected by models next week. Their simulations predict some places in the high Arctic will rise over 50 degrees above normal.
[December 2016: Weather buoy near North Pole hits melting point] 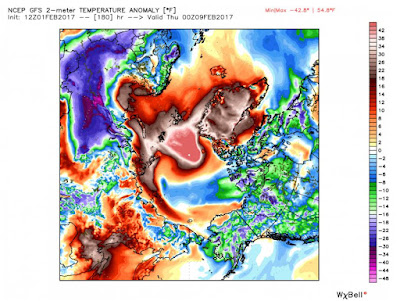 The 12Z Feb. 1, 2017 GFS forecast for 2-meter temperature anomalies [converted into Fahrenheit] valid at hour 180, 0Z Feb. 9, 2017 for the polar region in a map prettied up by WeatherBell.com.
CWG Caption: GFS model temperature forecast difference from normal next Feb. 8 over Arctic. (WeatherBell.com)
*******

One chart, in particular, is a jaw-dropping and emblematic display of the intensity and duration of the Arctic warmth. It illustrates the difference from normal in the number of "freezing degree days," a measure of the accumulated cold since September. 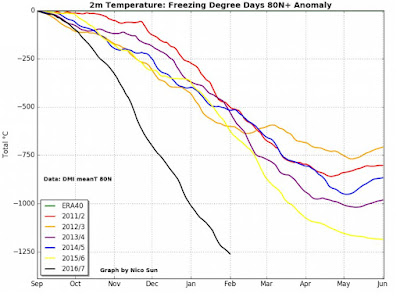 CWG Caption: Averaged over the Arctic north of 80 degrees, this chart displays the difference from normal in the cumulative number of freezing degree days September to January. Freezing degree days accumulate according to the number of degrees Celsius below freezing. Minus-5 Celsius would represent five freezing degree days. (Nico Sun)
Note: ERA40 is the ECMWF re-analysis of the global atmosphere and surface conditions for 45-years, over the period from September 1957 through August 2002.
*******


The number of freezing degree days is far lower than any other period on record. Eric Holthaus, a meteorologist and science writer who first posted the chart to Twitter, remarked it illustrated a "stunning lack of freezing power" over the Arctic. "This is happening now," he added. "Not in 50 or 100 years -- now."
The chart was created by Nico Sun, a citizen scientist, using temperature data from the high Arctic, north of 80 degrees latitude, furnished by the Danish Meteorological Institute.
Because data is sparse in this region, David Titley, a professor of meteorology at Penn State and Arctic climate expert, suggested "a little" caution in interpreting the chart but said he considers it "basically right" given other data. "This is another 'smoking gun' pointing to rapid climate change," he said.
Jason Furtado, a professor of meteorology at the University of Oklahoma, called the chart an "incredible" depiction of the Arctic warmth. "While the magnitude of the Arctic warmth is extraordinary in and of itself, the duration of the warmth has been astounding," he said.
Climate scientists say there is no single cause for the remarkable warmth, but posit it is due to natural variations in the Arctic climate superimposed on a long-term warming trend resulting from human activity.
Walter Meier, a research scientist at NASA's Goddard Space Flight Center and an expert on Arctic sea ice, explained that the recent lack of sea ice and warmer-than-normal ocean temperatures have "kept air temperatures higher than normal, especially in the Barents and Kara Seas" between Greenland and Siberia. "A series of storms tracking from the south has led to repeated influx of warm air and ocean waters into the region," he said. Such an influx is predicted next week.
Sun, the chart's creator, pointed to a recent lack of cold polar high pressure systems over the Arctic, which block heat and moisture transfer from mid-latitudes. "Now Atlantic and Pacific storms blow right into the central Arctic and transform the area from a cold, dry desert into a wet and stormy ocean,” he said.
But it's unclear and perhaps unlikely that this set of conditions, which has essentially opened the floodgates for an onslaught of warmth into the Arctic, represents a permanent state.
Zack Labe, a PhD student at the University of California at Irvine who is studying Arctic sea ice and extreme weather, said that while greenhouse gases will continue leading to a warmer climate and less ice in the long run, the Arctic will probably continue to experience significant year-to-year fluctuations.
"I think we should be cautious, especially considering the resiliency of sea ice, when discussing the warming trend," Labe said. "It remains uncertain the role natural variability may be having in individual years such as this one."
Yet the human influence on climate in the Arctic may be redefining the so-called natural variability, said Chip Knappenberger, a climate scientist at the Cato Institute. "Natural variability is itself is becoming increasingly "non-natural" as it includes influences which themselves are shaped by anthropogenic activities," he said.
Such a statement is notable coming from Knappenberger, who some consider a climate change skeptic and is unconvinced climate change is a serious problem.
Caption: The last five years have been the hottest on record, according to scientists from the World Meteorological Organization, the United Nations weather agency. (Reuters)
*******


What happens next in the Arctic is anyone’s guess. But Penn State's Titley, who said we are "headed into a new unknown" is concerned: "Science is still trying to figure out the details. We do know that 2017 will almost certainly start with the weakest, thinnest, smallest arctic ice pack in recorded history. So we are one step closer to living with an ice-free arctic in the summer, and probably sooner than we think."
[Arctic sea ice is at a record low and could, in spurts, disappear within our lifetimes]
*******


OK, that's all for now. I'm heading home. It's a non-gym night and I'll stop maybe at Trade for a bit. I also need to get some dinner. I may try to post another entry later tonight. If not, it'll be tomorrow.
--Regulus
Posted by Regulus at 8:14 PM