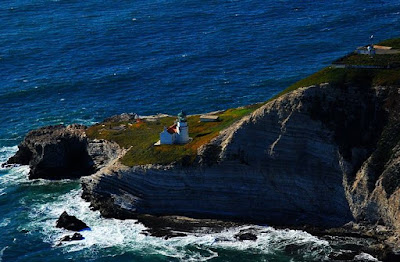 Aerial view of the rocky promontory (headline) of Point Conception with the Point Conception Light at the edge of the Pacific Ocean as seen in a photo taken March 5, 2009; source image here.
*******


Eh, not much to say tonight, or rather, I just don't feel like posting anything. I'm back from the gym following my work day and watching my usual late-night TV sitcom reruns on Antenna TV. That would be Wings, Becker, and Newhart.
Here are a few worthwhile links:
Ignorance is Strength by Paul Krugman
The Madness of King Donald by Andrew Sullivan
(I know Andrew Sullivan as a bar acquaintance although he doesn't know me by name.)
Trump said he would hire the best people. Instead we got the Trump administration. By Matthew Yglesias
OK, that's all for now. Oh, yes, Chris pointed me to this: Some hilarious outtakes from the 1970s children's show New Zoo Revue.
Caution: The first outtake clip between Freddie the Frog and Charlie the Owl is quite startlingly risqué. Remember this was a children's show from the early 1970s.
--Regulus
Posted by Regulus at 2:22 AM