There is absolutely no weather here in the Eastern U.S. -- nothing but impending warmth and dry in a winter season that is quickly approaching one of the warmest on record. For February, KDCA was averaging +5.4F above normal as of yesterday; KBWI at +5.0F and KIAD +5.2F. Within a few days, these numbers will be much higher -- probably over +7F. 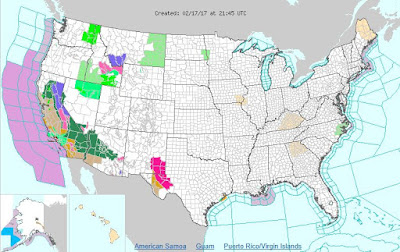 
Year-to-date precipitation is steadily falling behind normal here in the extended Baltimore / Washington region -- I don't even feel like posting the numbers because drought depresses and upsets me.
However, a tremendous Pacific extra-tropical storm system energized with a deep plume of tropical moisture is barreling into California focused on, yes, Southern California in what could be the strongest storm since December 2004 if not January 1995.


The storm is forecasted to bring 2 to 4 to 6 to 8+ inches of coastal and valley rain and several feet of mountain snow along with hurricane-force wind gusts. The central low could get down to 988mb -- which, by comparison, is just a bit above the all-time February lowest pressure recorded in San Diego at 984.4mb in 2010. 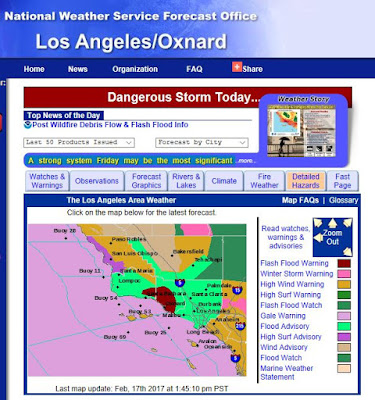 
This storm should alleviate the remaining parts of California that have been in long-term extreme-to-exceptional drought. However, it will bring it with a host of issues, in particular mudslides, wind damage, and coastal erosion. 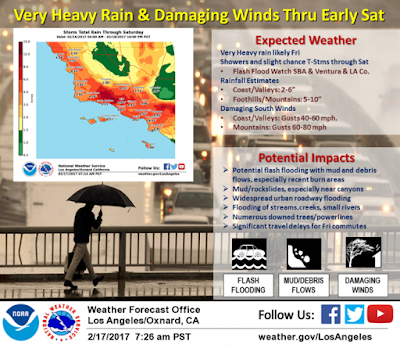 Here is the CWG entry about it: A 'dangerous storm' is crashing into Southern California. Here’s the forecast.

Los Angeles / Sulphur Mountain (VTX) standard base mode reflectivity NWS radar looped 1:03PM - 1:46PM PST February 17, 2017.
The precipitation is cut off because of the nearby mountains blocking the beam.
******* 
Even before this storm, both KLAX and KCQT are well above KDCA, KBWI, and KIAD for year-to-date precipitation. Through 5PM EST today, we have the following for precipitation since January 1st:
KLAX: 9.45"
KCQT: 10.66"


But, again, there is no "weather" forthcoming here for the D.C. area for days -- probably weeks. So I can only watch the weather vicariously -- this time, in all places, Southern California ...
--Regulus
Posted by Regulus at 6:28 PM