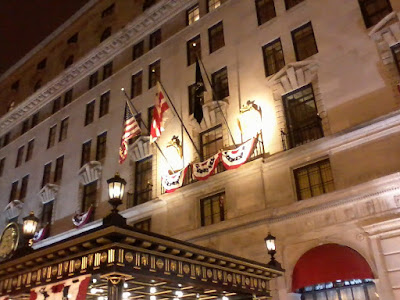 
I'm here at work late (again) and I'm missing the damn gym (again), although I am bound-and-determined to go tomorrow during the day since I'll be home. 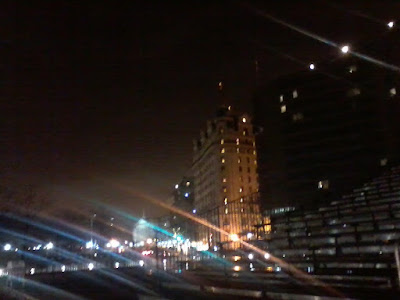 
As I work just off the National Mall, and given that Donald J. Trump OBE, (Orange Buffoon Emperor) is soon to get his pudgy, porcine hands on the nuclear codes in less than 48 hours while our wall-to-wall kooky rightwing radical Republican government figures out how to rob 32 million Americans of their health insurance in the name of Jesus, Free Markets, and Paul Ryan's Ayn Rand deity, everyone is teleworking tomorrow and Friday. Well, actually, the federal government is closed on Friday, but contractors such as I are required to telework or take the day off.
I'm planning on going up to Maryland tomorrow evening on the MARC train to visit my mom for a few days and return on Sunday.
I stayed until nearly 1130PM at the office last night and then walked home -- crossing the fog-shrouded National Mall -- and stopping at Old Ebbitt Grill for a late dinner at the Old Bar before heading up 16th Street to my place. I didn't get home until about 215AM and to bed until 430AM. 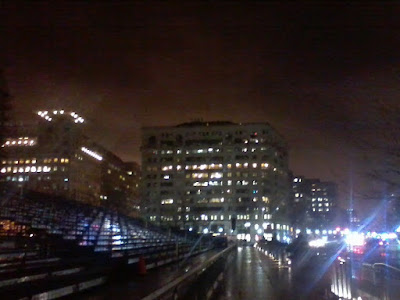 Freedom Plaza on a murky, foggy night with all the bleachers set up for the Trump inaugural parade along Pennsylvania Avenue, Washington, D.C., 11:43PM January 17, 2017.
My friend Chris (now in Atlanta) used to work in the large building facing the plaza at the Burlington Coat Factory law firm, I mean, Covington and Burling Oddly enough, that's where a group of us were on the day of Pres. Obama's first inauguration, although we didn't see diddly-squat and the parade was delayed for hours.
*******


On my walk, the night was murky, vaporous, and weird with the Mall all muddy and made eerie looking with the blinding flood lights. Everything was done up for the goddamn inauguration as though it were a celebration and not the start of an epochal historical disaster. Of course, there were also literally thousands of chain-link fence segments lining every main and side thoroughfare so that the whole thing looked like a cross between a police state celebration and preparations for a big riot (which isn't out of the question given the planned Saturday protests). 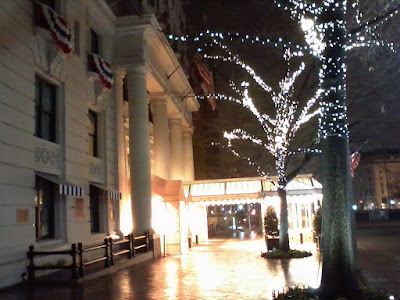 
This included walking along Pennsylvania Avenue through a maze of fences and barricades at Freedom Plaza. Very few people were around so it was easy to navigate. Oh, and I found an old, wet $5 bill at 14th and Pennsylvania.
At Old Ebbitt, I talked to a strange, pretty, dark-haired, and very tall young lady who is in town from New York City who is a Trump supporter. (Why can't I ever find a nice guy to talk to??) An Israeli-born Jew, she now lives in the U.S. and was once in the Navy but now does a lot of work for the NYPD, she said. She was kind of intriguing and rather than arguing with her on anything -- I disagreed with literally every assumption she made -- I just listened to her. 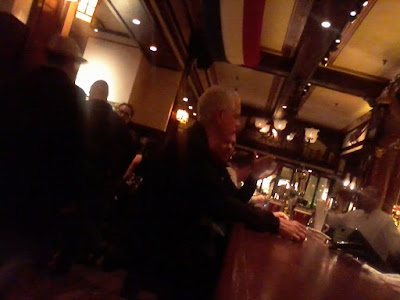 The Trump that she sees taking office bears no resemblance to the one that I perceive, but there you have it.
She bought me a glass of wine as I was explaining to bartender Andrea about the death of my stepfather, a Vietnam vet, and that's what started the conversation. At one point, she got into a verbal tiff with another guy over whether or not Syrian refugees are "on welfare."
Something about ISIS training camps in America, too, and to be very, very afraid.
We hugged goodbye.


The good news is that it is looks like it will rain on Friday, so maybe we can do a William Henry Harrison with Trump. 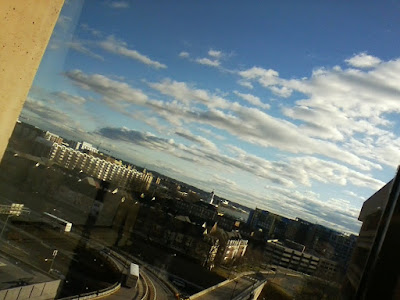 
OK, that's all for now. My next planned entry is tomorrow night. I really just want the inauguration over and to get this Philip K. Dick dystopian alternative reality started.
--Regulus