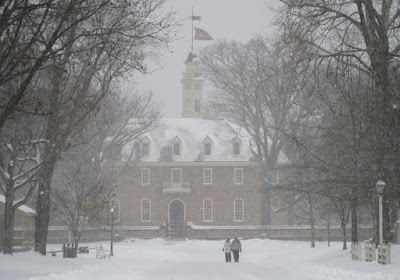 The pictures in this entry are taken primarily (it should be obvious which) from this CWG entry (link embedded): Photos: A snowstorm to remember in Williamsburg. 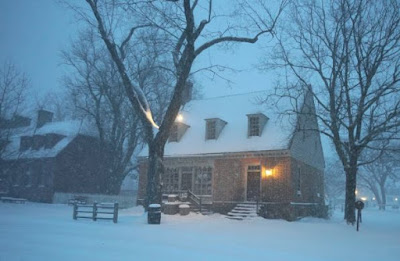 The photos are by photographer Kevin Ambrose. The snowstorm in question hit the Tidewater area on Jan. 7th with 12.5 inches of snowfall in Williamsburg -- which (according to Kevin) "almost equaled the great snowstorm of Jan. 5, 1980, which dropped 13.5 inches of snow in 24 hours on Williamsburg, but fell well short of the blizzard of 1966, which dumped 21.8 inches of snow on the city." 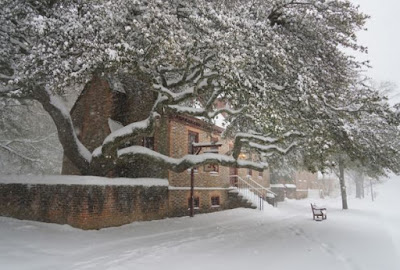 Here in D.C. and in the immediate Baltimore / Washington area, there was really only about an inch -- and less at the airports despite one heavy snowsquall that passed through midday.
As context, Williamsburg reportedly averages 5.1 inches of snow in an average year. By contrast, KDCA averages 15.4 inches and KBWI averages 20.1 inches in the current 30-year average. 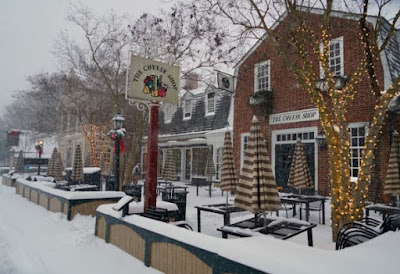 I am not including the captions -- if you want to picture info, click on / download the images. The file names are based upon the captions Kevin provided in his entry.
The other images in this entry are California weather-related ones from the NWS. 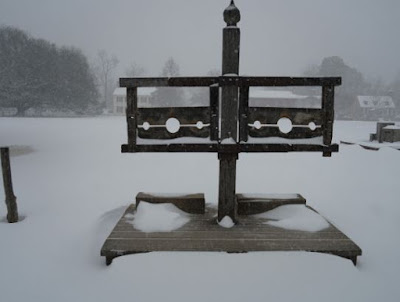 Too bad M. WADE Tipamillyun wasn't back there in the stockade flipping you off in a photograph.
******* 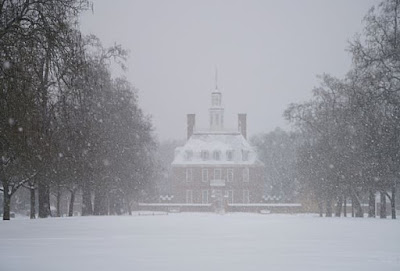 I thought I was getting better from this head/chest cold but I feel very congested and groggy this mid-to-late morning. I really need to get into the office. I've not been there since last Thursday.
This isn't to say I haven't done any work since Thursday. I stayed up all night Sunday into Monday morning working on edits to a peer review from about 930PM to 730AM, whereupon I went to sleep until 3PM. 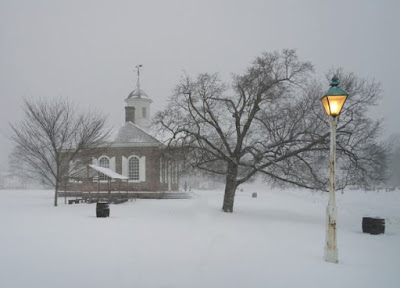 While up all night, I had Antenna TV on (I get that with my digital antenna -- remember I don't have cable) and watched a bevy of 1980s and early 1990s sitcoms from 227 to My Two Dads to Dear John to The Bob Newhart Show Newhart. 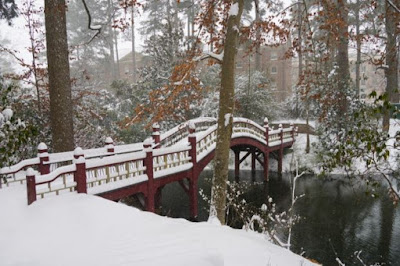 Anyway, I got up at 3PM and made it to the gym before going out into very cold night (it was about 23F) and went briefly to Trade and then to Stoney's for some dinner. I then walked home and got to bed around 1AM. I got up and had a Theraflu drink around 330AM, which mostly just made me groggy. 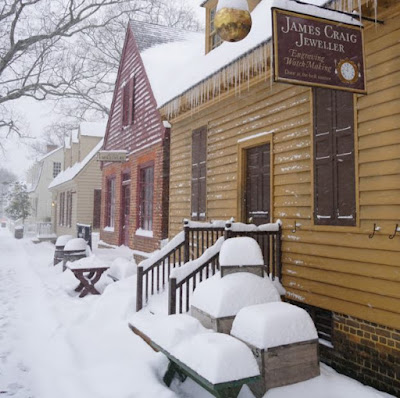 Right now, I just want to sleep this morning but I really need to get up and into the office. I'm not going to be there this coming Thursday or Friday for Ray's funeral (which is Friday). 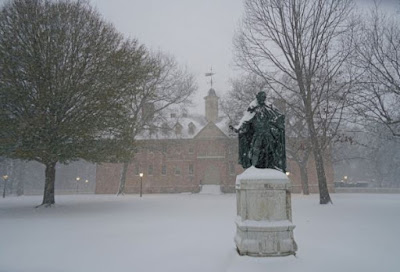 Then it is the Martin Luther King holiday weekend -- followed quickly by the Donald Trump installation as (if I can channel Charles Pierce) talking yam-in-chief. This is bad enough but we also will have wall-to-wall rightwing radical Republican government, so it's really going to be a nightmare. 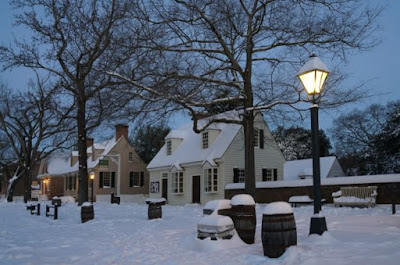 This situation has been building for quite some time, and our electoral system is so skewed, broken, and outright deranged that it always gives that side much more political power than this side -- and there you have it. I actually think the country is approaching serious political crises and potential civil unrest in the next 5 to 10 years (especially as soon as the next crash hits and the government under Trump and the GOP naturally respond in ways that exacerbates everything). 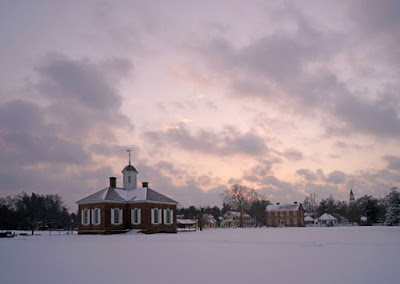 Regardless, and as I have mentioned, I'm not going to spend a lot of time in the coming months obsessing on whatever immoral act of oligarchy and theocracy comes out of Congress or profane and indecent thing Trump tweets or says. 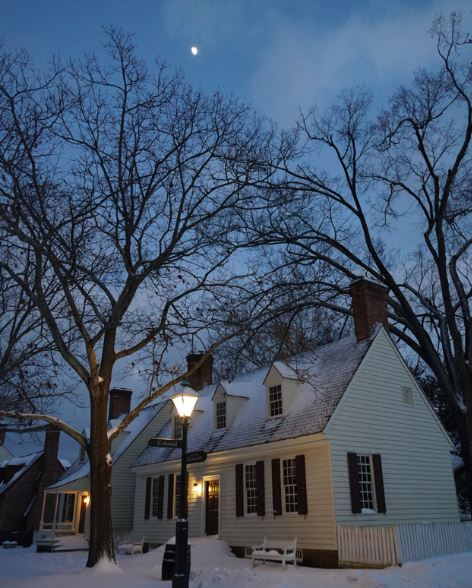 The weather is still cold with temps this late morning around 28F here in D.C. Indeed, cold weather has encompassed a huge swath of the Lower 48 with something like 93 percent of its geographical territory below freezing on Sunday morning and with snowfall on the ground in at least some part of 49 of the 50 states (only Florida had no ground snow whatsoever). 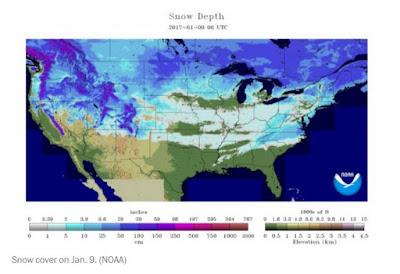 Snow coverage map for the lower 48 CONUS valid 6Z January 9, 2017.
(OK, including Louisiana is a bit of a stretch but there you have it. Oh, and note the hole over the Baltimore/Washington region.)
*******


A warmup is forecasted here (and across the Eastern U.S. in general) along with some rain. 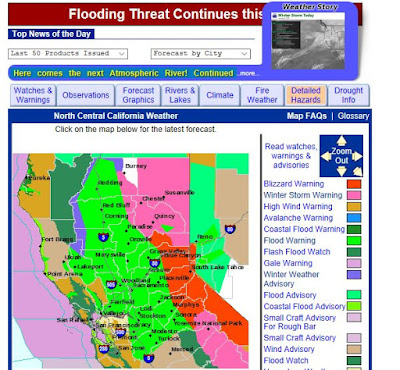 
The big weather story is the veritable firehose of Pacific storms hitting the northern half of California (occasionally dropping farther south into Southern California) flooding rains in the coastal and valley areas and many feet of snow in the high Sierras. There is actually a blizzard warning in effect across portions of the Sierra Nevada range this morning.


Farther north in the Siskiyou and Shasta-Trinity wilderness areas, snow levels with warmer Pacific air and there are widespread flood advisories simultaneously with winter storm warnings. 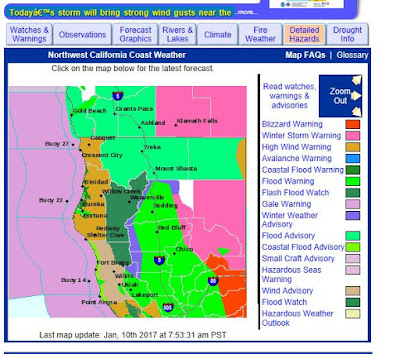 
This pattern should be a drought-buster following multiple years of severe drought in California. It's the Pacific Ocean unleashed thanks to the upper level pattern.


OK, this entry ended up way longer and more involved than I anticipated -- but I am fully awake and feeling much better now. So I'm going to wrap it up now. My next entry might be Wednesday night or, alternatively, Thursday evening from my mom's place in Millersville, Md.
--Regulus
Posted by Regulus at 12:12 PM