Tuesday Morning Timbre -OR- Vicariously on the Road to Mandalay 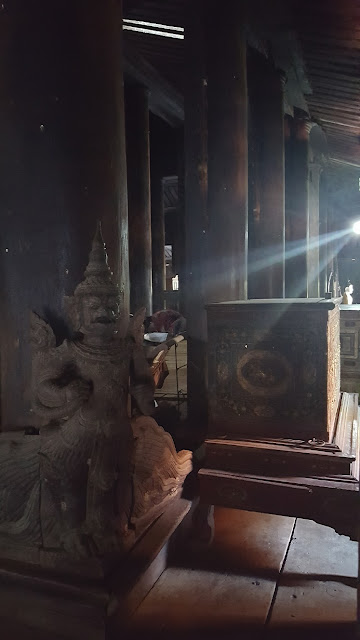 The interior of the Bagaya Monastery in Inwa near Mandalay, Burma, December 6, 2016.
This is an all-teakwood monastery that is actually a reconstruction of the original built in the late 16th Century. Andrea took this picture and the one below on her recent trip to Burma (OK, Myanmar).
*******


Just a brief mid-morning update, if only to have a new lead entry.
I have to get to the office today and make sizable progress on a long-delayed task involving SEP financial monitoring reports. I need to have at least two -- and, ideally, three -- done by Thursday afternoon.
Tonight is a gym night and tomorrow night, I'm going to stay late at the office (until very nearly Metro closing time).
Last night, Andrea and I went to Post Pub for dinner and then stopped at Trade. I then stopped at No. 9 before heading home, detouring to that awful 17th Street Safeway. God, I hate that place and so much about it. It's so depressing -- and surrounded by a veritable homeless encampment that forms a daunting gauntlet through which one must pass.
While at Post Pub, I looked at the many pictures that Andrea took on her just-concluded trip to Burma (and a one-day stop over in Doha on the way back). The two pictures in this entry are taken from that batch.
It really is the only reason I ever need to be on deplorable 17th Street anymore (with the exception of when I meet Fred at Annie's sometimes on Fridays). 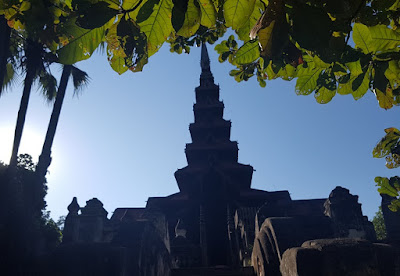 
On Sunday, I went to Rock Bottom in Bethesda, where I met Quill for lunch and Chester joined us. That was nice except the place was crowded due, in part, to a frickin' Redskins football game (I loathe American professional football) with the occasional raucous whooping and even that stupid "Hail to the Redskins!" song once the team (apparently) won. In addition, our young waiter came off as a clueless fraternity boy (the sort from the NYC area who attends UMCP -- a type I know well).
I should note, contrary to what I previously said, Ray is still not out of the hospital as the discharge date has been postponed a few times now. I really hope he is home for Christmas. My plan is to be there to see my mom and him for a few days.
OK, that's all for now. I'll refrain from any other discussions (including one on our dire political situation) lest this entry spiral out the way most of them do. My plan is to post an entry after I get home from the gym tonight.
--Regulus