Reposted from WaPo Energy and Environment Blog: Freakish Warmth Across the Arctic to the North Pole Itself 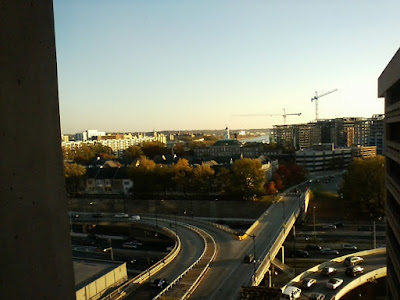 View of Southwest Washington, D.C., including the spaghetti maze of I-395 and its ramps, as seen from my office, 4:12PM November 12, 2016.
The view down the Potomac River has been nearly eliminated as a result of the massive development project along the Southwest D.C. waterfront.
Oh, yes, my extended detail at DOE has ended -- it lasted about 2 months -- and I'm back in my regular office at L'Enfant Plaza.
*******


Tonight is a gym night. I intend to post an entry of some sort thereafter. In the meantime, I want to repost in full this amazing and worrying -- indeed, borderline scary -- piece by the CWG's Jason Samenow and Chris Mooney on the latter's Energy and Environment Washington Post blog.
It's about the extreme warmth in the Arctic all the way up to the North Pole itself -- with the polar vortex itself well-displaced into the Eurasian hemisphere. 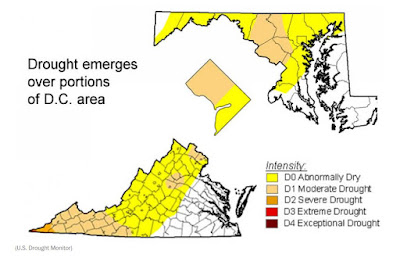 
As for the weather here, we remain locked in a very dry pattern with above normal temperatures, although a big cool down is forecasted for this weekend with maybe a little rain. The Metro D.C./Baltimore area has now joined other parts of the Eastern United States in entering drought conditions (see above) including D0 and D1.
We better get all this data while we can before Trump and the GOP Jacobins ban all such data-collection and dissemination. Anyway, without further ado -- and with captions added but the links within the entry (in the interest of time) not included ...
--Regulus


The North Pole is an insane 36 degrees warmer than normal as winter descends
By Chris Mooney and Jason Samenow
November 17, 2016 at 1:41 PM
Source here.


Political people in the United States are watching the chaos in Washington in the moment. But some people in the science community are watching the chaos somewhere else -- the Arctic.
It's polar night there now -- the sun isn't rising in much of the Arctic. That's when the Arctic is supposed to get super-cold, when the sea ice that covers the vast Arctic Ocean is supposed to grow and thicken.
But in fall of 2016 -- which has been a zany year for the region, with multiple records set for low levels of monthly sea ice -- something is totally off. The Arctic is super-hot, even as a vast area of cold polar air has been displaced over Siberia. 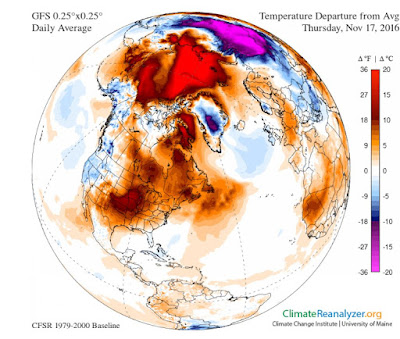 At the same time, one of the key indicators of the state of the Arctic -- the extent of sea ice covering the polar ocean --- is at a record low. The ice is freezing up again, as it always does this time of year after reaching its September low, but it isn't doing so as rapidly as usual.
In fact, the ice's area is even lower than it was during the record-low 2012: 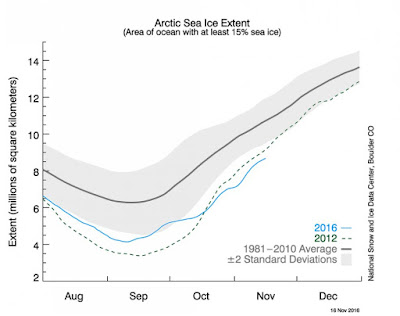 
Twitter's expert Arctic watchers also are stunned. Zack Labe, a PhD student at the University of California at Irvine who studies the Arctic, tweeted out an image on Wednesday from the Danish Meteorological Institute showing Arctic temperatures about 20 degrees Celsius higher than normal above 80 degrees North Latitude.
"Today's latest #Arctic mean temperature continues to move the wrong direction ... up. Quite an anomalous spike!," Labe wrote. Here's the figure: 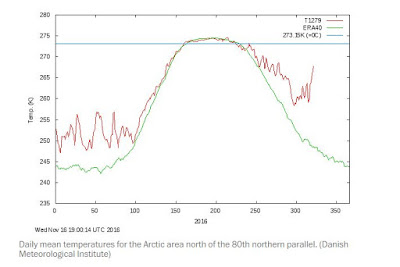 Daily mean temperatures for the Arctic north of the 80N parallel for 2016 through November 16, 2016 versus the historical average; source: Danish Meteorological Institute. Temperatures are in Kelvin.
*******


"Despite onset of #PolarNight, temperatures near #NorthPole increasing. Extraordinary situation right now in #Arctic, w/record low #seaice," added Daniel Swain, a climate scientist at UCLA.
This is the second year in a row that temperatures near the North Pole have risen to freakishly warm levels. During 2015's final days, the temperature near the Pole spiked to the melting point thanks to a massive storm that pumped warm air into the region.
So what's going on here?
"It's about 20C [36 degrees Fahrenheit] warmer than normal over most of the Arctic Ocean, along with cold anomalies of about the same magnitude over north-central Asia," Jennifer Francis, an Arctic specialist at Rutgers University, said by email Wednesday.
"The Arctic warmth is the result of a combination of record-low sea-ice extent for this time of year, probably very thin ice, and plenty of warm/moist air from lower latitudes being driven northward by a very wavy jet stream."
Francis has published research suggesting that the jet stream, which travels from west to east across the Northern Hemisphere in the mid-latitudes, is becoming more wavy and elongated as the Arctic warms faster than the equator does.
"It will be fascinating to see if the stratospheric polar vortex continues to be as weak as it is now, which favors a negative Arctic Oscillation and probably a cold mid/late winter to continue over central and eastern Asia and eastern North America. The extreme behavior of the Arctic in 2016 seems to be in no hurry to quit," Francis continued.
Francis cited the work of Judah Cohen, a forecaster with Atmospheric and Environmental Research, who has linked odd jet stream behavior with cold air over Siberia.
Indeed, another Arctic expert, James Overland with the National Oceanic and Atmospheric Administration, said that the jet stream at the moment is well configured to transport warmth northward into the Arctic. "There is strong warm advection into the Arctic, especially northern-central Canada, in through the Atlantic, and east Siberian/Chukchi Sea," Overland said.
The whole situation is pretty extreme, several experts agreed.
"Both the persistence and magnitude of these temperature anomalies are quite unusual," Labe added by email. "Large variability in temperatures is common in the Arctic (especially during the cold season), but the duration of this warm Arctic -- cold Siberia pattern is unusual and quite an impressive crysophere/sea ice feedback." (The “cryosphere” refers to that part of the Earth’s system that is made up of ice.)
Abnormally warm air has flooded the Arctic since October. Richard James, a meteorologist who pens a blog on Alaska weather, analyzed 19 weather stations surrounding the Arctic Ocean and found that the average temperature was about 4 degrees (2 Celsius) above the record set in 1998.
Since November, temperatures have risen even higher. "It is amazing to see that the warmth has become even more pronounced since the end of October," James wrote on his blog.
Mark Serreze, who heads the National Snow and Ice Data Center in Boulder, Colo., agrees that something odd is going on. Not only are air temperatures unusually warm, but water temperatures are as well. "There are some areas in the Arctic Ocean that are as much as 25 degrees Fahrenheit above average now," Serreze said. "It's pretty crazy."
What's happening, he explains, is sort of a "double whammy." On the one hand, there is a "very warm underlying ocean" due to the lack of sea ice forming above it. But, at the same time, kinks in the jet stream have allowed warm air to flow northward and frigid Arctic air to descend over Siberia.
"The sea ice is at a record low right now, for this time of year, that's one thing," Serreze said. "And why it's so low -- again, there's so much heat in the upper ocean in these ice-free areas, the ice just can’t form right now. The ocean's just got to get rid of this heat somehow, and it's having a hard time doing so." 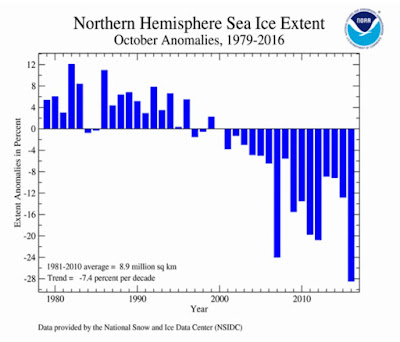 
The situation this winter could set the Arctic’s ice up for very thin conditions and a possible record low next year, Serreze said, although it's too soon to say.
The weather in the Arctic can change swiftly. Temperatures could cool and the ice could rebound.
But the record-low sea ice extent and unprecedented warmth in the region fit in well with recent trends and portend even more profound changes in the coming years.
Posted by Regulus at 6:14 PM