November Friday Night Creature Feature: Some Thoughts As We Descend Into the Prolonged Trump/GOP Authoritarian Kleptocracy 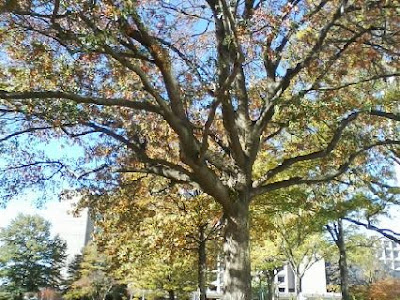 
Home on a Friday night -- Veterans Day holiday.
It's a breezy, cool night (57F at the 8PM hour at KDCA) with a north wind 15MPH and occasionally gusting to 30MPH following a dry cold frontal passage earlier today.
However, while it is approximating a nice fall night, the fact is, there is zero meaningful cold air anywhere on this side of the North Pole and a severely blocked jet stream with spreading fall drought conditions over a large swath of the eastern United States. (All the cold air and snow is displaced into Eurasia along with the developing wintertime polar vortex.
I had the day off and didn't get up until damn near 3PM. I made it to the gym just before 4PM and stayed there for damn near 4 hours doing a multi-part workout. Of course, it doesn't really matter since I'm a middle aged nebbish leprechaun that looks like shit no matter what I do. Still, I had a good workout with jog, weightlifting, core, and swimming.
It goes without saying that this was one of the mostly existentially hellish weeks for me -- probably on par with the 2000 election -- except this one is worse with a fascist buffoon madman in the form of Donald Trump and wall-to-wall radical rightwing Republican rule.
Let's be clear on one thing: Hillary Clinton actually won by a razor-thin margin the popular vote, thus making it six of the last seven presidential elections (the exception being 2004) in which the Democrat has beaten the Republican in that way.
However, we are firmly locked into a one-party white ethno-nationalist-driven authoritarian state. This is due to how political power is apportioned through the Electoral College, the Senate, and a severely gerrymandered House, not to mention the mal-distribution of progressives and other non-fascists / non-racists / non-idiots holed up in little urban enclaves.
The mainstream whore media is also to blame for facilitating this -- and I refer to CNN, not the animals on the Republican Party's propaganda organ of Fox News or the ever-metastasizing for-profit conservative media/entertainment complex -- as is a national law enforcement agency (FBI) that intervened in the campaign and probably tipped the balance.
Jonathan Chait has laid out how the Republican rule will likely play out -- and why -- as Trump and the GOP create an American-style authoritarian kleptocracy.
Keep in mind that the Republican Party is at this point, wholly voter-proof in the sense that anything appalling or shocking it WILL do in the coming months -- knocking 22 million off health insurance, letting financial sector crooks run riot, stealing trillions for the 0.1% overclass "job creators," bringing into the fold every parasitic and bottom-feeding corporate lobbyist and righting ass-hat, repealing the entire structure of the regulatory and social welfare state back to FDR to include all environmental laws -- won't matter in the slightest.
We learned that we live in a post-factual universe over the course of the last 16 months of this obscene presidential "campaign" where truth itself is totally irrelevant. 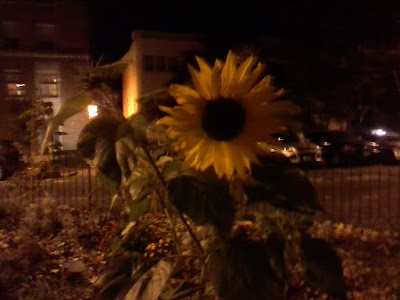 Small sunflower growing in a small garden plot at the intersection of New Hampshire Ave and T Street NW, Washington, D.C., 11:28PM November 10, 2016.
I past by this sunflower on election night heading home. It was the only thing nice about that night.
*******


Thus, the fucking "VALUES VOTERS" in "Real Red America" won't notice because Fox News and AM Hate Radio will keep them benighted and whipped up into a state of hysteria with a relentless persecution of Hillary Clinton and Democrats in general (future Attorney General and lunatic Rudy Giuliani has promised that).
So when every fucking idiot in Kentucky loses their K-Y Net, I mean, Kynect, health insurance, they'll be told to focus instead on Benghazi and emails. True to form, these drooling idiots will burble -- all wide-eyed from their opioid addictions -- "Oh, yeah, yeah, oh, yeah, yeah, yeah, Benghazi. Emails. Yeah, yeah, yeah..."
Fucking idiots.
That will be repeated across Red America and on ANY topic up to and including sending their kids off into GOP wars of aggression. 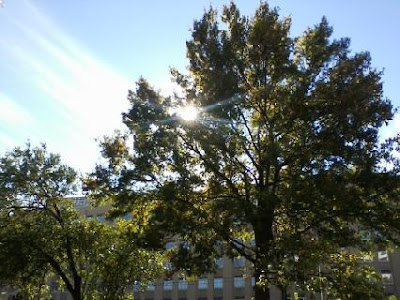 
Oh, and keep in mind that every piece of legislation that the Zombie-Eye Paul Ryan and Mitch the Bitch McConnell passes (with zero trouble, having abolished the filibuster) will have some horseshit "backronym" name such as The Defending and Strengthening Americans Health with Proven Market-Driven Solutions Act that spells out something like "The JESUS GETS GOOD HEALTH AT WALMART Act" or some such garbage that would do The Party in George Orwell's 1984 quite proud.
Already, every vile bottom feeder and cockroach is coming out of the sewers and drain pipes to work for "President Trump" and his administration. Wall-P will have endless opportunities to suck up to power and money.
Oh, and check this out: Trump's Favorite Senator Hates Certain Global-Intellectual Media Banking Types.
Trump surrogate Senator Jeff Sessions -- a sexually ambiguous troll (as in, is he a flaming homosexual or a fundamentalist Christian?? ) -- is making noises that any fascist anywhere would find music to their ears.
Why do we have to live in the same country as these people?
As for the fucking "mainstream media," the entire incentive structure will be to normalize the deeply abnormal with the he-said/she-said or (to channel Paul Krugman) "views differ on shape of Planet Earth" nihilistic mindset that focuses on "the process" and poses such topics as, "Are Democrats being unfair to Donald Trump and not giving him a chance?"
Fuck you, Anderson Cooper and the rest of the CNN "media pony" stable.
OK, enough of that. Let me just point out that both filmmaker Michael Moore and political historian Allan Lichtman -- both of whom accurately anticipated a Trump win -- are saying that Trump won't even last 4 years as president, but that's because the GOP really wants Mike Pence as president because Trump is simply too uncontrollable for the GOP's tastes. 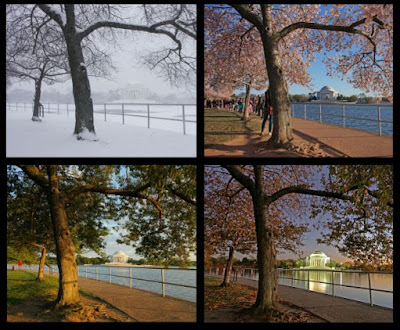 Four season panel from a spot on the Tidal Basin, Washington, D.C., in 2016. Photos by CWG photographer Kevin Ambrose and appearing in this entry (including the dates each were taken).
*******


For tonight, I don't know what to do. Maybe I'll go to dinner at the bar at Logan Tavern. For tomorrow, I don't need to go to the gym, having done so this day. I'll post an entry tomorrow.
The following is what I wrote yesterday ...


At the tail end of this vortex of a nightmare week, I actually had a nice evening after work. (To be clear, I was busy at work and didn't have a bunch of time to figure out shit. However, I arrived 2 hours late. But I'm filling in almost as a courtesy a desk that just requires a body. I called my supervisor and explained it -- but she knew it all before I said anything and was sympathetic. And then my top boss took me to lunch and we had a nice chat.
Bottom line, I was never hired to be 9-5 or a secretary, so what I've been doing as been extra and good they both said.
Anyway, tonight, after work, I went to Trade and had a couple drinks. Then I met my neighbor / fried Fred at Annie's (upstairs bar). We both vented and vented and vented -- and it was good. His husband Doug showed up and we vented some more. 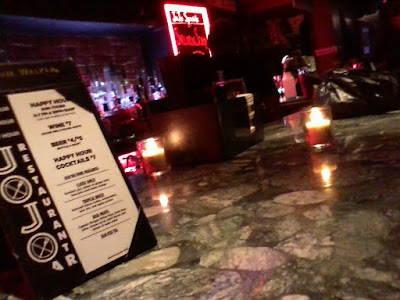 
Thereafter, for the first time, I ventured into JoJo, a live jazz bar on U Street literally less than 500 feet from where I am now writing this. It was late and there was no live band and the place was empty enough that I could find a seat at the bar. There was still jazz music playing and it was quite wonderful, as was the conversation I had with the bartender (with his radio voice).
He welcomed me to come back, which I will definitely do. (I'm going to refrain from writing his name in this entry since the rest of it is so vitriolic.)
Oh, yes, I read this CNN piece about misotheism. It struck a real chord with me.
Lastly, I came across this nice piece on the Daily Intelligencer blog ... 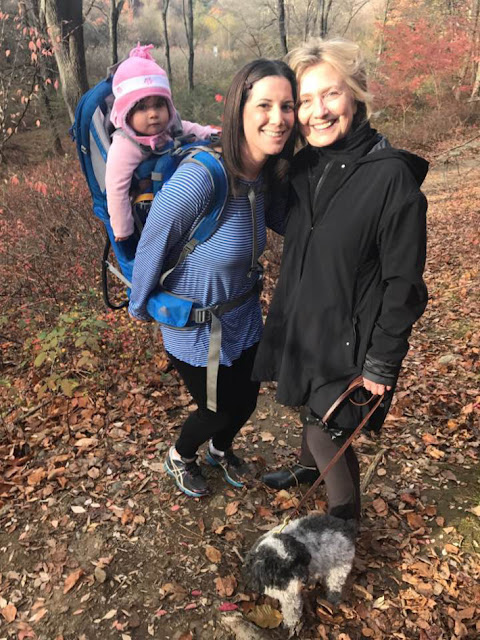 Margot Gerster was hiking near Chappaqua, New York yesterday when -- lo and behold -- she ran into Bill and Hillary Clinton also hiking with their dog.
*******