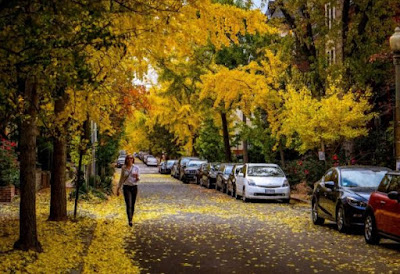 Brightly autumnal yellow-hued ginkgo trees on a side street somewhere around Dupont / Logan Circles, Washington, D.C., November 2016; Photo by Nathan Stewart and featured in this CWG entry.
Hopefully these are the males of this unusual tree species, otherwise that street stinks.
*******


Despite my earlier plan, I've decided that I need to refrain from daily political-themed entries in the Age of Trump. It's going to be four (or eight or however many) years of a non-stop whirlwind of daily drama, chaos, and aggravation (to say nothing of whatever ghastly laws and policies are enacted in our one-party rule nation*), not to mention the fact that I simply can't start political-themed entries at midnight when I have to go to work the next day.
*It matters not that Hillary's national vote lead is now over 1.7 million and likely to exceed 2 million, but thanks to the Electoral College -- a late 18th Century artifact designed for the sake of fucking Southern slave states -- that is meaningless. 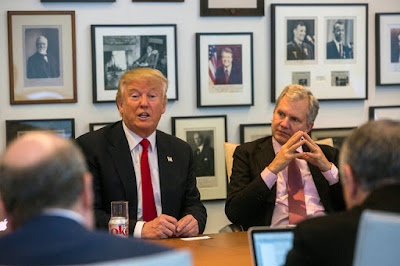 Donald Trump and New York Times publisher Arthur Sulzberger Jr. at the New York Times on-the-record meeting, Nov. 22, 2016.
It was an interesting meeting -- and a lot better than that shit-show of one with the TV execs and celebrity media types the previous day. I guess he can talk to various audiences as needed.
*******


I'll try to post a longer entry on this -- I already have one under development but it would take too long to get enough images and do all the formatting, etc.
That being the case, I'm not going to try to post anything substantial or substantive tonight. 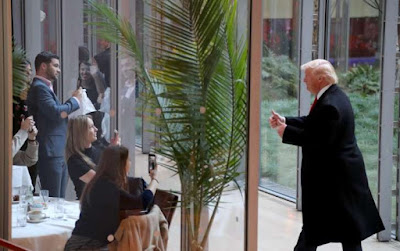 Donald Trump after his interesting meeting with New York Times editors and reporters today -- one in which he was scarily reasonable and almost normal.
*******


As for my day, I went to the gym after work (second night in a row), and now I'm home getting ready for bed. Tomorrow -- Thanksgiving Eve, as it were -- is a non-gym night after work and I might meet up with Andrea to go to Old Ebbitt, although unsure at this point. Alternatively, I might meet up with Fred.
As I mentioned in earlier entries, I'm going to Quill's parents' house in Silver Spring on Thursday for Thanksgiving and then visiting my mom Friday evening to Sunday afternoon before returning and will be there on Saturday (my birthday ...sigh).
OK, that's all for now. I'll try to post an entry Thursday early afternoon.
--Regulus
Posted by Regulus at 12:46 AM