In Lieu of Another Late-Night Hodgepodge of an Entry, Reposted In Full: Vox.com Article "Under Pluto's Icy Heart, a Slushy Sea May Stir" -OR- Heavy Heart Makes Pluto Topple Over 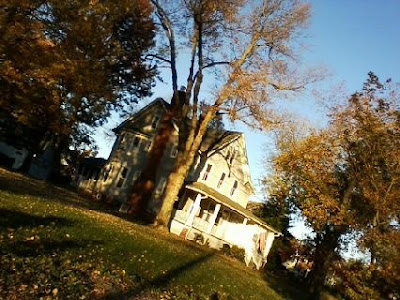 A large house along Linden Lane, Silver Spring, Md., 4:15PM November 13, 2016.
I think this house is 2301 or maybe 2303 Linden Lane. It's near the Walter Reed Army Institute of Research (WRAIR) at the Forest Glen Annex. This was on my Sunday late afternoon / evening walk from the Forest Glen Metro to Bethesda.
*******


Home from the gym and trying to post an entry. Rather than trying to post a complaint-laden, political-and-weather-themed hodgepodge of an entry plus always-miserable update at this late hour -- and I do need to be in work tomorrow at a decent hour -- I'm going to do as a I did in my previous entry. That is, I'm reposting something I came across on the internet that I want to relate in full. 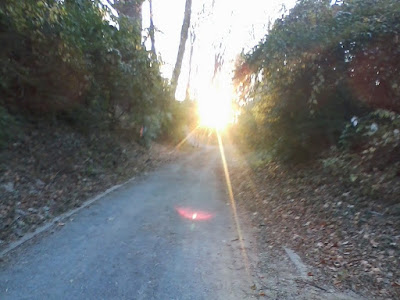 Setting Sun as seen from the Georgetown Branch Trail, Silver Spring, Md., 4:35PM November 13, 2016.
I was able to find the trail off Brookville Road -- a thoroughfare running through a strange suburban light industrial / warehouse zone that just sort of dead-ends into Rock Creek Park.
*******


In this case, it involves a hypothesis derived from a fascinating observation about our favorite dwarf planet Pluto that was made possible by the awesome, wonderful little New Horizons space probe in its July 2015 encounter. 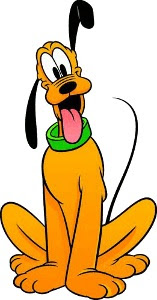 The observation is that the incredibly intriguing "Heart" shape on Pluto always faces the exact opposite side from Pluto's moon of Charon, to which Pluto is tidally locked. This is not just a coincidence but instead is surmised to be due to a significant mass imbalance involving whatever is under the Heart region.

There are two competing theories about what is under the surface of that region. The article below from Vox.com presents one of the two hypotheses. I added a few captions to the images.


Under Pluto's icy heart, a slushy sea may stir
Why scientists suspect there's an underground ocean on the dwarf planet.
Updated by Brian Resnick@B_resnickbrian@vox.com November 17, 2016, 10:33am EST
Source article here.
The dwarf planet Pluto orbits at the edge of our solar system, 3.67 billion miles from the sun, where temperatures on its surface can plummet to minus 400 degrees Fahrenheit. Yet even in that cold, dark region of space, scientists speculate the planet may have an ocean of liquid water, or slushy ice, just beneath its surface.
"We expected that Pluto would be full of surprises, but this one knocked our socks off," says Richard Binzel, an MIT professor who has been studying the dwarf planet since the 1980s.
On Tuesday, he and a team of scientists from NASA, MIT, and universities across the United States published a study in Nature based on observations from the New Horizons spacecraft. It finds evidence for such an ocean, specifically located in the left "lobe" of Pluto's heart-shaped basin, which you can see as the bright area in this image of Pluto below. 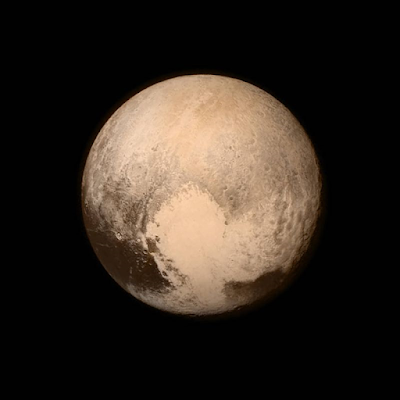 That spectacular Pluto "global mosaic" image in near-true color showing the Tombaugh Regio ("The Heart") on the day (July 14, 2015)of New Horizons' historic encounter with this distant dwarf planet -- forever the last of the "Canonical Nine" planets.
*******


Why scientists think there's an underground ocean on Pluto
An ocean under the heart of Pluto is the leading theory to explain a mystery about why Pluto's heart-shaped basin never faces Pluto's moon, called Charon.
Pluto and Charon are tidally locked in orbit. That means the planet and its moon always have the same sides facing each other.
Here’s a GIF from NASA of Pluto and Charon orbiting one another. Imagine Pluto is a man holding a rope attached to a ball. As Pluto spins around in a circle, holding the rope, he’s always facing the ball. And the ball is always facing him.

An animated GIF showing Pluto and Charon in their eternally tidally-locked orbits as seen by the New Horizons space probe at some distance out.
*******


When the New Horizon spacecraft began sending back images of Pluto's spectacular heart-shaped basin, scientists thought it was peculiar that the basin was almost perfectly aligned with the orbit of Charon.
Scientists are skeptical of coincidences. So what could cause Pluto’s "heart" to line up in this way? One explanation: There's something there throwing Pluto off balance.
"There's a little extra mass there [in the heart]," Binzel says. "We're trying to understand what it is that could contribute that mass. And the answer we come to is maybe there's this dense subsurface layer of liquid water, or a slushy layer ... pushing up in the region."
When the ocean formed in Pluto's heart, it made the dwarf planet reorient itself so that the heavy ocean was on the opposite side of Charon. "That extra mass is going to line up either exactly toward Charon or opposite Charon," Binzel says. It's what the laws of physics dictate.

NASA/Johns Hopkins University Applied Physics Laboratory/Southwest Research Institute
This animation shows how Pluto reoriented itself in the past due to the extra mass in the Tombaugh Regio and how the amount of volatiles in it has changed and will continue to change over time.
*******


So how did the ocean get there in the first place?
Binzel suspects that Pluto's "heart," particularly its left ventricle region, called Sputnik Planitia, was created by an impact with another object in the Kuiper belt, an asteroid belt near the edge of the solar system. 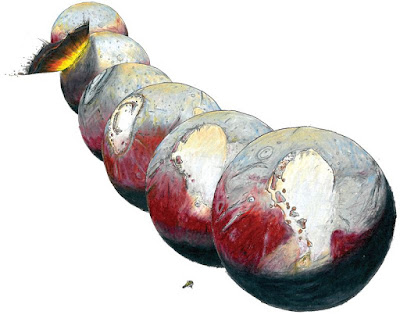 
That impact gouged out a piece of the surface of Pluto, making the crust very thin at the point of impact. Underground water, kept warm by Pluto's radioactivity, then flooded this area of thin crust like water in a blister. This formed the extra mass that caused Pluto to reorient itself so the impact zone faced away from Charon.
Binzel doubts scientists will be able to absolutely confirm the existence of an ocean without sending a spacecraft to orbit Pluto. And he admits it is possible that the source of the mass underneath Pluto's heart is not water. A second paper in Nature today outlines a competing hypothesis: that it's ice that accounts for the mass, not liquid water. (You can read The Verge's report on it here.)
Nevertheless, both papers agree: There's something massive in the heart of Pluto that causes the planet to line up with Charon in its peculiar way. And there will be more discoveries to come.
By studying Pluto, and other faraway objects in the solar system, we can get a sense of features that could conceivably exist on the billions of other planets in our galaxy.
In the case of Pluto, Binzel says, "Nature is so much more creative than we can imagine." And what about life in this subterranean ocean? Could it exist there? It's very, very unlikely, but as Binzel says, wherever there's water, it opens the possibility.
Posted by Regulus at 1:33 AM